We hold these truths to be self-evident:

1. Introduction: Google's Response to Legal Problems In Europe and Why I Started to Loathe Google

Until quite recently, although I feared Google, I respected Google. Google's recent response to the EU investigation pushed me over the top, from fear alone to fear and loathing. In its response, Google suggested that proper labeling of its promotion of its own offerings would serve as a complete response to the complaints of the Commission's investigation of deceptive practices. As I argue below, this is frankly absurd, and absurdly inadequate. The EU complaint did not go far enough, and this response falls far short even of addressing the EU complaint.

Google enjoys our trust. Indeed, it enjoys our trust because for decades it has been assuring us that its search is fair and unbiased. You merely need to look at "Ten Things We Know to Be True" to see the promises that Google has made. It enjoys almost unlimited power in its pricing of search, its ability to promote its own offerings, and hide those of its competitors. And it has combined this trust and this almost unlimited power to crush competitors in various lines of business, by preferencing its own offerings up and competitors' offerings down. Google places its own offerings near the top of search, and, on occasion, causes competitors' offerings to drop from top of the first page to the deepest levels of search hell, below the 10th page, where no one but researchers ever treads. Google gained its power and its trust with one set of behaviors; Google is now profiting from its trust by abusing its power, manipulating search not only for legitimate profits, but to unfairly advance its numerous wholly owned vertical businesses.

In order to assess just how severe Google's manipulation of search has become, I tried a couple of queries, for cameras, flights to Singapore, and gamer headsets, and found a Google product ad at the top of the left or the right column 100 percent of the time. I tried looking for luxury hotels in Venice, and found one organic result. Everything else on the top of the page was either a sponsored link (now called an ad), a Google ad (now called a sponsored link), a traditional search engine ad (still called an ad) or a map ad. Buried in the middle of the page was a single real result, for a single booking agency that books luxury hotels in Venice. I admit that I am not sure which of the map entries are ads and which are not.

We found an unpaid link, a single real result, included in the set of search results solely because of its relevance. 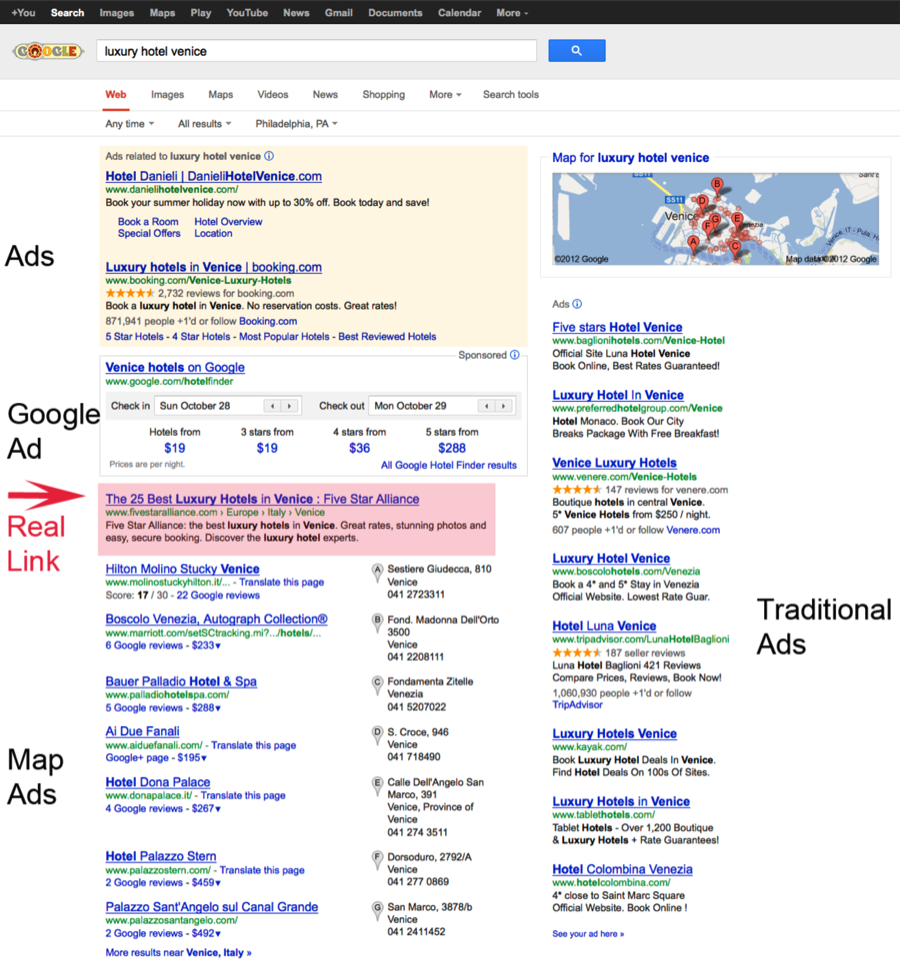 This page is nothing short of astounding. You just don't show up on a search result any more unless Google can make money from you.* We don't see the iconic 10 blue links anymore; we see one blue link, some clear ads, some less than clear ads, and some abuse of monopoly power through vertical integration.

Google's response to the EU's complaint was to leave ads, search ads, and abused and hidden competitors, all pretty much as they were, and to leave their own products at the top of the search. They did offer to label their own offerings as Google products. Competitors' offerings would still languish in search hell.

2. Google's Legal Problems in the U.S.

Indeed, the severity of the preferencing problem, and Google's ability to promote its own offerings, and to harm even high-quality offerings of well-established competitors has been widely reported in the U.S. It was the subject of testimony at the Senate Judiciary Subcommittee Hearing on Google in September 2011. It appears to be one of the principal motivations behind the Federal Trade Commission's expected announcement of an antitrust lawsuit against Google.

And Google executives are not going to change their behavior to comply with regulations as long as the penalties associated with violations are so low; at present, penalties are low enough that Google's illegal behavior is still cost-justified for shareholders and for executives. Laws must regulate Google's behavior, in the U.S. and abroad, and must be clear and unambiguous. And punishments must be sufficiently severe that clearly violating unambiguous laws is demonstrably very bad for Google, for its shareholders, and for its external directors. An environment must be created where behavior at Google that society feels is unacceptable becomes so costly to Google that Google ceases to pursue it. I'm no longer certain that Google executives understand what "don't do evil" means; I am pretty certain that they would understand what "don't do things so bad that the fines are billions of dollars and you could do serious jail time" means.

Part two of this series addresses the most significant forms of abuse by Google and reviews the forms of regulation required as remedies. Part three provides additional detail on Google's deceptive practices and abuse of market power and provides additional detail on harm and on remedies. Part four deals with abuse of power and suggests changes to privacy law, and provides some concluding remarks.

*That's not entirely true. No one seems to have purchased the keywords for the search "Afghanistan Graveyard of Empires." In general searches with no discernible commercial value remain unmodified.