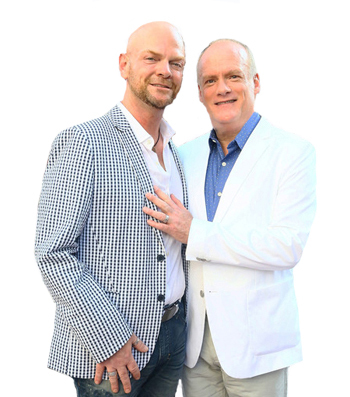 This week I talked with Sam Street and Jonathan Tack about their exquisite jewelry line, Proposition Love Jewelry, which donates 10 to 20 percent of proceeds to LGBT-related causes. Jewelry industry veterans Street and Tack were married in California just a few days before Proposition 8 was voted into law. They were part of the lucky few who never had their right to marry taken away, but it made them realize how precious such a thing can be and motivated them to become active in the fight for LGBT equality.

I talked with them about what inspired them to create Proposition Love Jewelry and their spin on LGBT issues. When asked about their personal commitment to LGBT civil rights, Tack stated:

We launched a new collection called Love Is Love because we believe that everyone has the right to love whoever they want to love, and it should be their choice and their civil right. We did a big launch party for Love Is Love, actually, in Beverly Hills, in which we designed various rings for numerous celebrities. For example, we did a ring for Kathy Griffin; we did one for Perez Hilton; we designed one for Melissa Rivers, Tori Spelling -- the list goes on and on. It was so heartwarming for us because when we reached out to these celebrities, you know, in their busy lives, we said, "Hey, listen, we would love to design a ring for you to support gay marriage and LGBTQ rights, and we would like to auction the ring and donate 100 percent of the proceeds from the sale to the charity of your choice that would obviously correlate to what we're looking to support here." It was just overwhelming how many celebrities jumped on board and just said, "Hey, we love it. We're going to do it."

Sam Street and Jonathan Tack founded Proposition Love Jewelry in 2011 as a symbol of love and commitment to one another and a pledge to support the rights of all. Proposition Love Jewelry proudly donates 10 percent of profits to organizations that support marriage equality, LGBT rights, LGBT youth anti-bullying initiatives and HIV/AIDS activism. They increased their donation to 20 percent for all purchases made in the states where marriage equality has recently become law. For their Countdown Collection they have created a wedding ring for each state to symbolize the historic moment that marriage equality became law. Recently their exquisite LGBT jewelry line has become available at Macys.