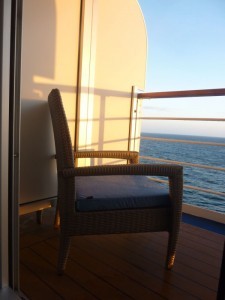 When previous trips have left you sick of packing and unpacking luggage, of dragging large bags over cobblestones, and of carrying them up staircases that never end, cruises can look good. Suitcase weariness was why I decided to try another cruise this spring. Shipboard closets are reliably large and come with drawers. I unpack once and that's it. And after a few days of walking six to seven hours on land, I find that returning to my stateroom really does feel like going home. The plumbing is reliable and I don't have to keep figuring out how to flush the toilet or operate the sink, and sometimes I might even get a bath tub. What luxury! And then there's the verandah -- good for private moments with the ocean.

But cruising has its down sides, too. I don't have time to soak up the cities I visit. It's in and out. So it's best to save cruising for places that are hard to get to over land. Pompeii, for example, involves a long trip to Southern Italy, Positano, an unnerving drive along what the Monastero Santa Rosa Hotel called "the most precipitous road in Europe with vertigo-inducing vistas plunging down jagged cliffs to the azure Tyrrhenean Sea." Not for those inclined to attacks of acrophobia when looking down stairwells. Still, just dipping in for a day does give me an experience of the place. I wade into it enough to know whether I like it enough to come back. Pompeii, yes! St Malo, France, not so much.

It can be lonely on cruises, too, unless you're traveling with a large group of family or friends. Yes, I do participate in Cruise Critic, an online site where people on the same cruise sign up for small group excursions with people they've never met. And those strangers can feel like friends during the moments we travel together or maybe dine together once. But, by and large, I don't meet many people with whom I can relax. It's an unspoken rule that fellow travelers don't discuss politics, but there is often an underlying politically-based strain. I've found it hard to warm up to those who let it drop that they park their money in Nevada to avoid paying taxes. Perhaps I'm on the wrong kind of cruise. Perhaps I need one of those educational (and truly expensive cruises) led by Berkeley Ph.Ds.

Ah, but the food! The master chef on our ship was Jacques Pepin, and the dining was sublime. My husband, who at home refuses to let anything containing sugar sully the stern chastity of his lips, ate a variety of chocolate desserts every single night. That's Chocolate Dessert with a capital C and D. I mean Nine Minute Baked Valrhona Chocolate Cake with Raspberries and Vanilla Ice, Milk Chocolate Mousse Macadamia Dacquoise, Dulce and Dark Chocolate Brownie Soufflé, and Raspberry Caramelized Mille Feuille with Madagascan Vanilla Cream, covered in chocolate.

I, in contrast, desperate to balance caloric intake with caloric expenditure, decided before I took off to eat lobster every chance I got, thus combining a protein-rich, relatively low-calorie food with a bit of gourmandizing. I never order lobster in the States because of its hair-raising cost. Maybe European lobsters are less expensive? At any rate, it's possible on board to eat lobster at every meal. And so I ate lobster omelets, lobster salad, grilled lobster, lobster thermador, lobster risotto (a carbo slip), and lobster and mascarpone pancake with baby carrot emulsion and rock chive cress. I paid for all of this in advance, of course, but eating a fancy dinner every night without seeing a bill made me feel like I was rich.

And so did the ship's décor. The two-story, Lalique, double-curved grand staircase, a mad explosion of red, black, and ivory marble with intricate balustrades of scrolled iron and medallions, lit by a 1,300 pound Italian crystal chandelier, and ending in a towering, flower-filled crystal vase had surely been designed to leave the grand staircase of the Titanic in its wake.

And there's the rub. Cruising also felt downright colonial. Even though my ship was purported to have better labor conditions than do more famous cruise lines, even if I rationalized that the hundreds of wait staff, from all over the world, were at least employed and that the staff were receiving what seemed to be some elegant training, even though I was charged a thirty dollar tip every single day, I never felt comfortable with a uniformed army of staff attending to my every need. The more expensive staterooms on ship came with butlers. The very idea of a butler made me break into a sweat.

So, once again, I've decided to return to packing and unpacking or perhaps to finding a low cost river cruise on which passengers serve themselves from a buffet. Or since the terrible labor practices on cruise lines are being exposed and since current protests might someday actually improve the status quo, maybe I can return to cruising at sea in greater comfort. How many rivers are there to navigate, after all? Or, more to the point, how soon will suitcase weariness return and settle in?