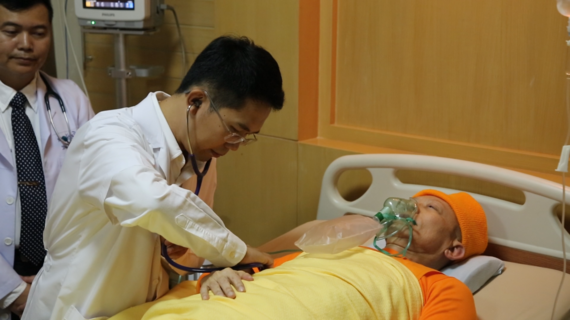 The ongoing prosecution of Venerable Dhammajayo, a Thai monk and the abbot of Wat Phra Dhammakaya, the largest Buddhist temple in Thailand, has brought forth a wave of protests from supporters across four continents. Venerable Dhammajayo, also known as Phrathepyanmahamuni, stands accused of money laundering and receiving stolen property by the Thai Department of Special Investigation (DSI). Several years ago he had received donations from Supachai Srisupa-aksorn, the former chairman of Klongchan Credit Union Cooperative (KCUC). Allegations against Wat Phra Dhammakaya arose when it was alleged that Srisupa-aksorn had embezzled more than 12 billion Thai baht from the credit union and some of the checks, totaling 684 million baht, from this offense had been traced back to Wat Phra Dhammakaya. The rest of the money, all in checks, were traced to numerous other organizations, including other temples.

Supporters of the abbot from around the world protested the charges, they state it is ridiculous to charge somebody for receiving a donation that was later found out to be questionable. They base this on the fact that the temple receives donations in the open public, en masse, among a crowd of thousands of donors. They say doing so would make any non-profit vulnerable to tainted donations and that it is not appropriate for temples to ask donors about the source of their donations.

Protesters state the money laundering charges are also groundless since the donation was transparent and there was no evidence of concealing the money trail, which they say is proof the temple did not know the donations were embezzled. The protesters also believe that DSI has been unfairly focusing solely on the abbot, even though the temple only received about 5% of the illicit funds involved in the scandal. 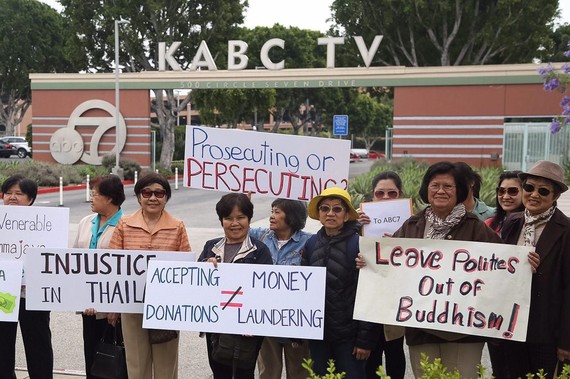 The first known protest outside of Thailand was on May 10th, 2016. Buddhist protesters in Los Angeles, California assembled in front of several news stations and local landmarks to picket what they say are unjust accusations. They were featured on KABC channel 7's breaking news segment at 11:00 AM. The protesters stated their intention was to raise international awareness of the unfair case. 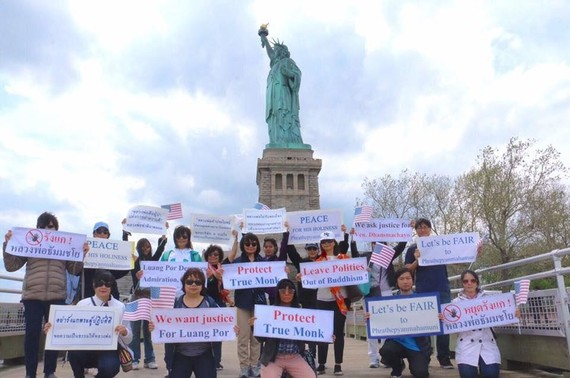 Dhammakaya supporters across the globe have gathered in front of major landmarks and public areas the past few weeks in similar protests, including in the United Kingdom, France, Australia, Hong Kong, Germany, Thailand, and other major American cities including New York City and Seattle. 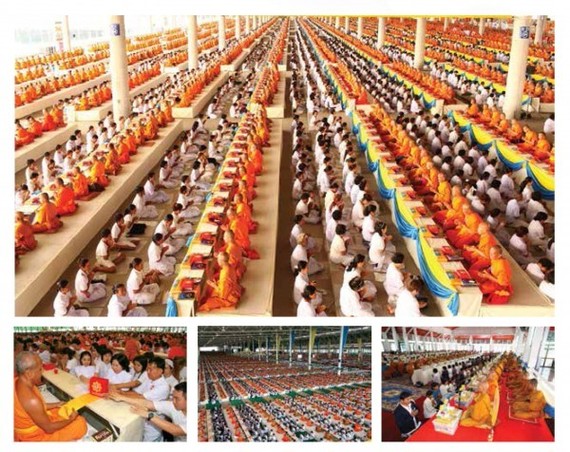 The protesters claim that Ven. Dhammajayo has been wrongly accused and are picketing to show support for the embattled monk. The abbot admits to receiving the illicit donations but claims he did not know where it came from as the checks were received in the open public among a crowd of donors. Temple officials have also stated the illicit checks were handled entirely by the temple finance department, independent of the abbot. 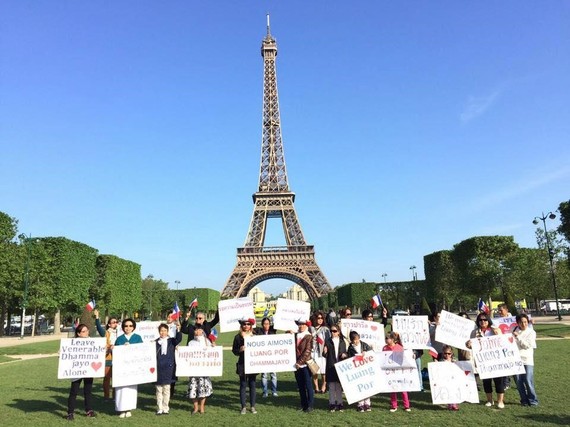 Devotees of Wat Phra Dhammakaya set up an emergency fund to return the equivalent of Srisupa-aksorn's illegal donations to KCUC once they were made aware that the donations were linked to the crime. As the illicit donation was already spent by the temple on public projects several years ago. KCUC initially filed a complaint with DSI against Ven. Dhammajayo, but have since dropped all allegations and issued a letter of appreciation to the temple supporters in response. 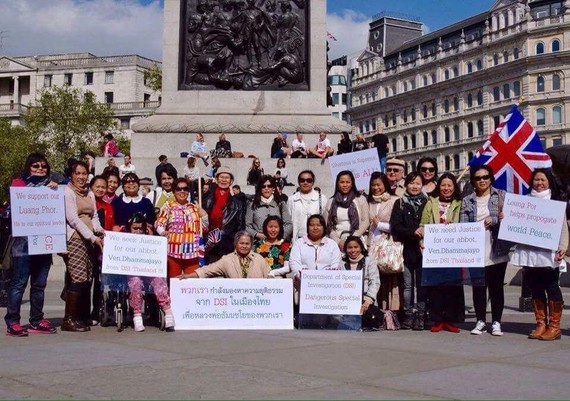 The Thai Department of Special Investigation (DSI) is still pursuing the abbot despite the return of the money, to the protest of supporters who worked to return the funds to KCUC and those who say the case is groundless. Representatives of the credit union also went on Thai TV to state that they no longer support the case against the abbot. 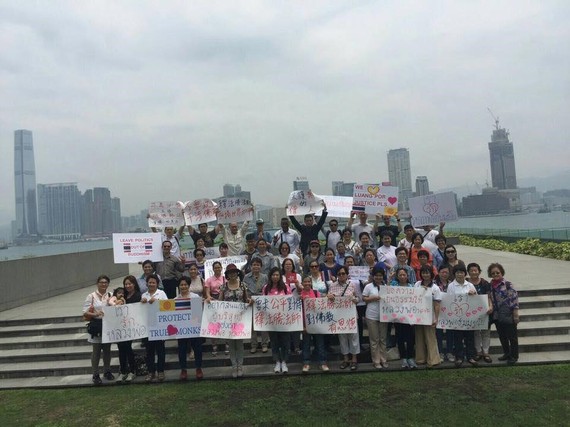 The accusations against Ven. Dhammajayo has caused not just protests, but also submissions of numerous petitions to various organizations about the issue, including Amnesty International; the governments of Sri Lanka and India; and Thai Consulates in Sweden, India and the United States. Freedom Watch International was also formed in response to the case and has made a plea for justice for the abbot. 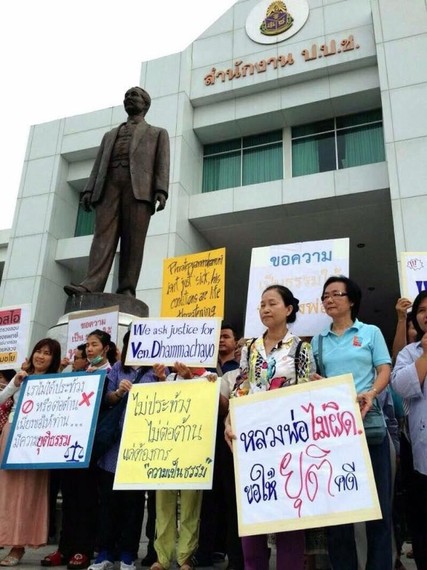 The case hit a boiling point on May 17th, 2016 when DSI was issued a warrant by the court to arrest Ven. Dhammajayo for failing to report for a summons on May 16th, 2016. DSI has since declared that the abbot has until May 26th to turn himself in before they consider making an arrest. Representatives of the abbot had previously requested on May 14th, 2016 that the meeting be moved to Wat Phra Dhammakaya's special care unit due to complications from Venerable Dhammajayo's chronic illnesses. This was supported by a panel of doctors who attested the abbot should not travel long distances. DSI refused the request and sought a warrant when the abbot didn't appear for the summons. 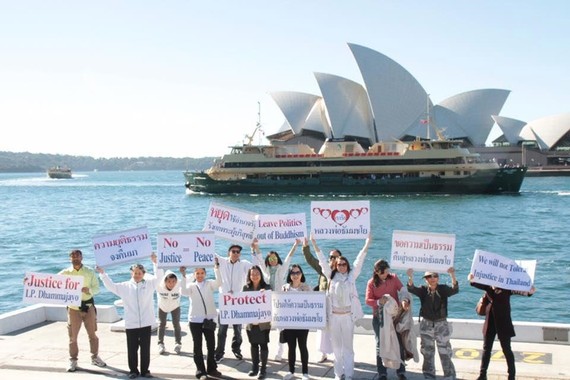 The recent actions of DSI sparked greater outcry from Dhammakaya supporters who questioned why DSI didn't grant the request or send their own doctor to verify the abbot's condition. According to a Dhammakaya press release held on May 14th, 2016--temple officials did indeed offer to allow DSI to appoint its own doctor to examine the abbot, an offer they refused.

A Thai news anchor questioned the Deputy-General of DSI on the Thairath TV show "Tam Trong Trong (Direct Questions) with Jomkwan" aired on May 18th, 2016, at 7pm UTC, about sending an independent physician to verify the abbot's condition.

In the exchange, the Deputy-General stated DSI would not send a physician to verify the abbot's condition and declined to answer why. This sparked more outcry among Dhammakaya supporters who claim the exchange proves DSI has knowingly acted unlawfully.

DSI's recent and controversial decision to arrest Venerable Dhammajayo actually led to the start of a petition to The White House on May 18th 2016. "Because DSI has ignored the rights of ill defendants for reasonable accommodation, we believe the Thai DSI has acted unlawfully and in gross violation of patient and human rights", it reads.

A temple official had stated that the petition was started independently by a US citizen who attended an affiliated temple in the United States.

Original story and all photos from Freedom Watch International.