co-authored by Matthew Bundle, Director of the Biomechanics Laboratory at the University of Montana, and SMU researchers Kenneth Clark and Laurence Ryan

An intriguing, technological watershed is fast approaching for Athletics -- that defining moment when an athlete with artificial limbs shatters an "able-bodied" world record.

Brazilian, double-limb, amputee sprinter Alan Oliveira is certainly not a household name, but he has quietly become much faster than some better known amputee runners. Earlier this summer, the 21-year old lowered the Paralympic 100 and 200-meter world records by time margins two to five greater than those by which Usain Bolt eclipsed the able-bodied records for the same events in recent years. Oliveira's current 200-meter mark is only 0.01 and 0.11 seconds shy, respectively, of the most recent B and A qualifying standards for the Olympic Games.

Yet, what is most intriguing about Alan Oliveira's performances in the short sprints is what they portend for a slightly longer sprint event. His 200-meter record of 20.66 seconds was achieved with the characteristically slow start and blazing finish of a double, lower-limb amputee athlete. His time, and the manner in which he achieved it, indicates that in the longest sprint event of 400-meters, for which the start is relatively unimportant, he is currently capable of running world-class times of 45 seconds or less.

Moreover, projections that fully consider the advantages that double artificial limbs can provide indicate that he could conceivably break the able-bodied 400-meter world record as soon as he chooses to concentrate on the longer event.

The Physics of Sprint Running with Biological Limbs: The top sprinting speeds runners can achieve depend upon: 1) how quickly the limbs can be repositioned in the air between steps, and 2) how forcefully the foot can strike the surface (in relation to body weight) while on the ground.

Video 1. Video footage and synchronized force-time relationships for the stride of elite track athlete Ben Clark sprinting at over 25.0 miles per hour.

While these physical limits are not surprising, the temporal manner in which they are imposed upon runners with biological limbs is. First, and contrary to intuition, at top speed, the fastest runners do not reposition their limbs appreciably more rapidly than slow runners do. Fast and slow athletes alike take just over 1/3 of second to reposition, or swing their limbs during an all-out sprint. Second, fast and slow runners also spend the same amount of time airborne between steps at just over one-tenth of a second. Third, at any given speed, the time a runner's foot is in contact with the ground is predominantly set by leg length. All runners, regardless of athleticism, spend progressively less time on the ground as they run faster.

Because of the time requirements nature imposes on the human running stride, the predominant differentiating factor for sprinting speed is how forcefully a runner's foot can strike the ground in the limited time available at high speeds. World-class sprinters will typically apply peak ground forces that are four to five times their body weight during foot-ground contact periods that last less than one-tenth of a second. Average athletes hit the running surface with peak forces of roughly three times body weight during foot-ground contact times that last appreciably longer than one-tenth of a second.

Double Artificial Limbs Break Down the Biological Barriers to Performance: Double, artificial lower limbs enhance speed in the same way that classic devices like ice skates and cross-country skis do; they allow athletes to circumvent the intrinsic time limits on the human running stride. Skates and skis prolong the time on the ground when the skate or ski applies force while simultaneously reducing or eliminating the time in the air. With these critical timing alterations to the gait cycle, the ground forces needed to attain any speed are greatly reduced, and the maximum speeds possible for human-powered travel become considerably greater.

Extremely lightweight carbon-fibre lower limbs enhance human performance by exploiting the same basic mechanism to a lesser degree. Reduced mass shortens the time needed for limb repositioning by 1/5th and the airborne period between steps by 1/3rd, while enhanced limb compliance prolongs the duration of those critically short periods during which force is applied to the ground. The net result of these timing alterations is that double-limb amputee athletes can reach world-class sprinting speeds with the ground forces and athleticism of an average high-school athlete. Moreover, double-limb amputee athletes can now engineer increases in speed with basic blade alterations, like reducing mass or increasing length. 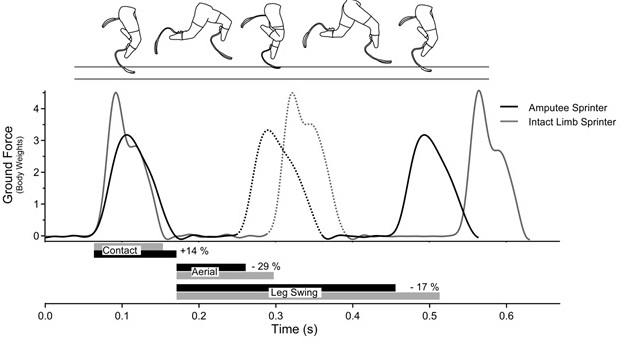 Figure 1. The vertical forces applied to the ground and stride time patterns of a double-limb amputee runner (upper panel illustration and black line) and an elite track athlete (not illustrated, grey line) sprinting at 24.3 miles per hour (10.8 meters per second).

No Technological Advantage for Single-limb Amputee Sprinters: As one might imagine, the design choices available to single-limb amputees for limb lengths, masses, compliances are comparatively quite narrow. Even moderate between-leg disparities in lengths or other limb properties would hinder rather than help their performance due to the asymmetries introduced. Consequently, single-leg amputees cannot operate outside the timing constraints of runners with biological limbs as double-limb amputees can. The presence of their biological limb constrains swing, aerial and contact times to biological values and leaves them with the same force-based requirement for speed that non-amputees have.

Video 2. Video footage and synchronized force-time relationships for the strides of two female athletes of the same leg length and body mass: 1) a competitive female soccer player, and 2) an elite Paralympic, single limb amputee sprint/jump athlete. Note the similar the forces and contact, aerial and swing time periods for the two athletes. [Single-limb amputee footage is from Paralympian Stef Reid during a performance check-up at the laboratory].

Certainly, the approaching watershed of a double-limb amputee athlete eclipsing the able-bodied world record will intensify policy issues for Athletics. How the scientifically apparent performance disparities described here ultimately translate into specific policy is difficult to predict given the dynamics of the administrative, legal and scientific processes involved. However, broader consideration of the numerous pharmaceutical, technical and other interventions in our midst makes one conclusion clear. The growing number of enhancement options available will deliver a sporting future in which performance limits will be determined progressively more by regulatory policy -- and progressively less by the traditional limits of human biology.

Professor and Director, the Locomotor Performance Laboratory at the Simmons School of Education and Human Development at Southern Methodist University