PARIS, Dec 4 (Reuters) - The French lower house of parliament passed a reform of prostitution law on Wednesday imposing fines on clients, a shift to tougher rules which has split the country and angered some sex workers.

Lawmakers voted 268 in favour and 138 against to give France some of the most restrictive legislation on prostitution in Europe - a radical switch away from the nation's traditionally tolerant attitude.

Those seeking to buy sex will now face a 1,500-euro ($2,000) fine, while the act of soliciting itself will no longer be punished.

Women's Rights Minister Najat Vallaud-Belkacem, who has championed the reform, argued that prostitution in any form is unacceptable and said the aim of President Francois Hollande's Socialist government was to suppress the trade altogether.

Proponents of the reform point to rising human trafficking as a reason for tightening rules. Some 90 percent of France's estimated 20,000 to 40,000 prostitutes are victims of Nigerian, Chinese and Romanian trafficking networks, the government says.

That is a jump from just over a decade ago when only one in five prostitutes were foreign and mafia rings were much less omnipresent.

Yet the reform has exposed divisions in French society just months after Hollande's government faced down a series of giant street protests over legislation legalising gay marriage.

Fellow ministers including Interior Minister Manuel Valls have expressed reservations about being able to apply the law as it stands. Hollande's Green coalition allies voted against, as did the opposition centre-right UMP members.

Some prostitutes say the law, which must also pass through the Senate upper house for a vote early next year, will rob them of their livelihood.

"Already, in the past two weeks we have felt the pinch," said a woman calling herself Sarah, who works in the Bois de Boulogne, a centre for prostitution on the outskirts of Paris.

"The clients aren't coming... and the few clients that do come all ask me the same questions: 'Is the law going through? What are we going to do?'"

Legislation in France lies somewhere between laws in the Netherlands and Germany, where registered sex workers pay taxes and receive health benefits, and Sweden, where clients are already targeted.

But as France considers adopting a much tougher attitude, prostitution in Germany has become a heated political issue once again - 11 years after the country decriminalised prostitution and gave sex workers legal status that allowed them to get health insurance and pensions. ($1 = 0.7360 euros) (Reporting By Nicholas Vinocur and Emile Picy; editing by Leigh Thomas and Mark John) 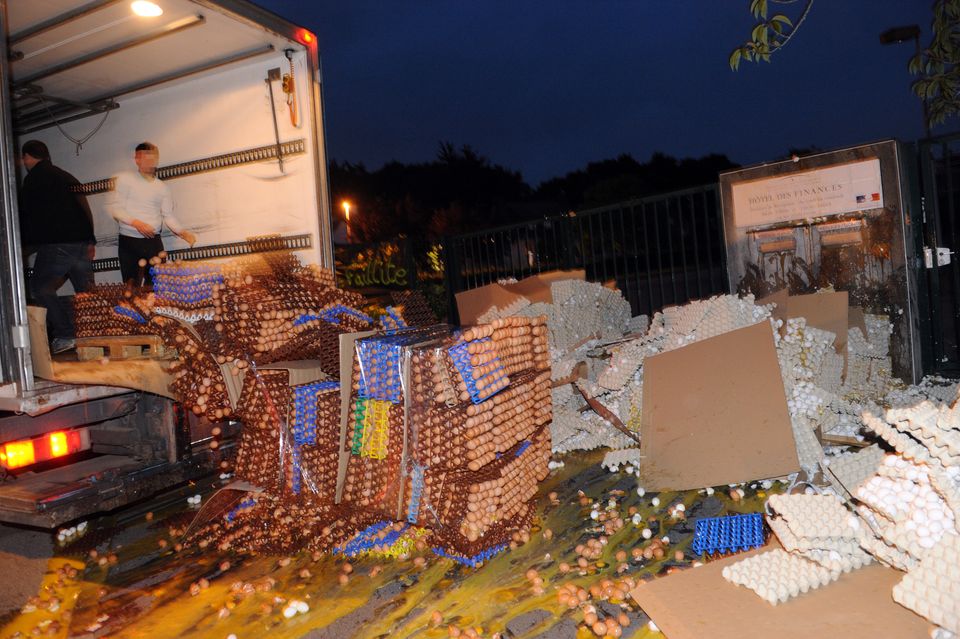 1 / 11
French egg producers throw crates of eggs from the back of a truck onto the sidewalk in front of the taxes and internal revenue service office in Carhaix-Plouguer, Brittany, western France, during a protest action, on August 7, 2013. (FRED TANNEAU/AFP/Getty Images)
Getty Images