The fishing communities dotted along Africa's often inhospitable coastline have overcome many challenges before. But they now face some of their most difficult challenges ever.

Many depend on fishing for their survival, but their fish stocks are declining and climate change accelerates that decline. The warming, rising, more acidic seas affect habitats and reproduction.

This is an important environmental question, of course, but the stakes go higher than that. Many coastal communities have few other options besides fishing. As a Mauritanian minister once said: "Take fisheries away from our people, and they will have little else to lose." Political and social stability is at risk. 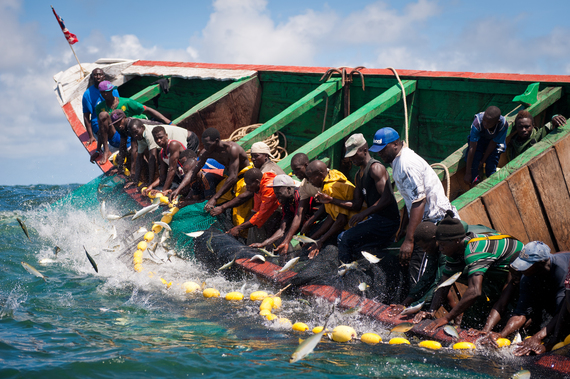 One of the best ways to build climate resilience for these communities is to protect their primary livelihood, the fish. And as delegates gather in Marrakesh for COP22, they must consider this fact.

Protection will not be easy. Many reports, including the 2014 Africa Progress Report - Grain, Fish, Money - have warned how illegal, unreported, and unregulated (IUU) fishing are destroying fish stocks all around the continent. In West Africa, illegal fishing alone accounts for a third of all fish caught.

The governments of Mauritania, the Seychelles, and others understand this better than anybody, of course, which is why they have been helping to establish the Fisheries Transparency Initiative (FiTI) since early 2015, an initiative to protect fish stocks through the twin principles of transparency and participation.

The FiTI is a global multi-stakeholder initiative, in which countries seek to shed a light on access to fish resources - who has access, what are the (financial) conditions, and how much is extracted? Answering these important questions in a deliberative process will help countries to improve governance in this crucial sector for the benefit of their citizens.

The FiTI is gathering steam. In addition to Mauritania and the Seychelles, Guinea, Indonesia, and Senegal are the first pilot countries. A first successful funding meeting was held in Washington last month during the Annual Meetings of the IMF / World Bank Group [editor's note ie in October], and under the guidance of an International Multi-Stakeholder Advisory Group, the global FiTI transparency standard will be finalized by early next year.

But the FiTI is not the only programme protecting fish stocks around the world. Rather, it is yet another example of how global fisheries may have reached some kind of tipping point in which they are now at the bottom and have begun the long, slow climb to the top.

In June, for example, a global treaty, the Port State Measures Agreement came into force with some 35 governments, including the European Union, signing up. Momentum is building to end the ridiculous $20 billion worth of annual subsidies that contribute to over-fishing. And some African countries are swapping satellite intelligence to tackle pirate fishing.

Better management of fish stocks will be key to any solutions. The FiTI's two core principles of transparency and broad-based participation will generate the trust and broad-based discussion so critical for the effective management of such a strategic, national resource. So our global multi-stakeholder initiative supports and complements existing efforts and makes them more effective.

Not only does transparency make corruption more difficult in awarding contracts to foreign fleets, for example, it also informs good policy, builds trust, and enables governments to make better decisions. In short, it improves the quality of governance.

Governments are key partners. They understand well that better fisheries management benefits a country in terms of food and nutrition, jobs, and government revenues to build climate resilience. Indonesia, a major fisheries nation, will host the global FiTI launch conference on 27 April 2017, for example.

But industries also prosper, because better fisheries management provides larger and more sustainable sources of fish stocks. This is why our initiative has more and more support from industry too.

These facts should play to the benefits of the world's -- particularly Africa's -- coastal communities too.

Delegates to COP22 know how the behaviours in one corner of our planet can impact a continent somewhere else. Africa's fishing communities have done so little to contribute to climate change and yet they face the harshest consequences. The least we can do is to help them build resilience, including by protecting their fish stocks.