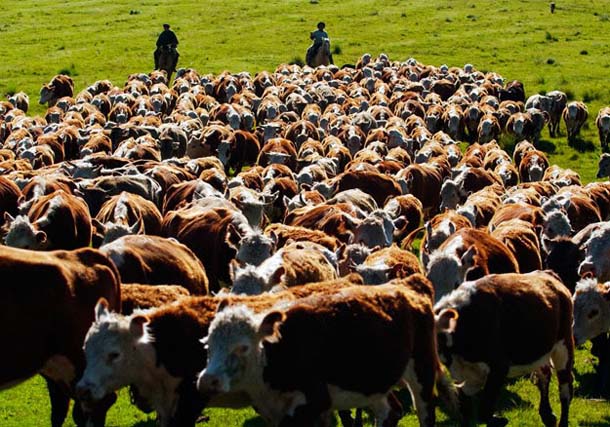 Last week I reported on the findings of a new Union of Concerned Scientists (UCS) report linking beef consumption to deforestation and climate change. I noted that most Americans are likely aware that eating beef poses potential health risks, but most are likely unaware of the connection between beef and global warming.

The report's main point? Consumer choices make a difference at both the personal and global level. The report's main message? Americans would better protect their health and the planet if they ate less beef.

The blog generated more than 750 comments, both positive and negative. Some detractors took issue with the studies that found eating beef is a health risk. Others insisted that cattle production is not the main driver of deforestation in Latin America. And some didn't understand how U.S. beef eaters could play a role in destroying forests in Latin America.

Given the keen interest in this issue, I thought it would be helpful to bring the lead author of the report, Doug Boucher, into the conversation. Boucher, who has a Ph.D. in ecology and evolutionary biology, is UCS's director of climate research and analysis as well as the director of the organization's Tropical Forest and Climate Initiative. I asked him to address some questions based on comments from last week.

First, I wanted to ask you about the health problems associated with eating beef. I know that wasn't what your report was about, but in my blog I noted that numerous studies--including a recent one published by the Harvard School of Public Health--have linked consumption of beef and other red meat to heart disease, cancer and other serious health problems. Is there any question about the health risks associated with eating beef?

The Harvard School of Public Health paper is just the latest of a number of scientific studies documenting the negative impact of eating beef on your health. The Harvard study is especially notable because it included an enormous number of participants (more than 120,000); lasted for more than 20 years; and controlled for many other variables, including age, gender, smoking, alcohol, vitamins, physical activity and aspirin use, as well as many diseases, medical conditions and consumption of other kinds of food. Those foods included processed meat, poultry, fish, vegetables, fruits, dairy, and on and on. After correcting for the effects of all these additional factors, the Harvard researchers found strong evidence that the more beef you eat, the more likely you are to get heart disease, cancer and diabetes, and die early. It found very strong scientific evidence that beef is bad for you, and as I said, it's only the most recent of many studies that have come to similar conclusions.

It bothers me when people dismiss scientific results they don't like by saying the studies are "just observational" and therefore not really scientific. Epidemiology is one of the many well-established sciences that are based mostly on observations, combined with sophisticated data analysis and mathematical modeling. We know that tobacco causes cancer, lead paint damages children's brains, and fruits and vegetables are good for you from epidemiological studies. Other similar "observational" sciences include archeology, astronomy, climate science, evolutionary biology, geology and paleontology.

Should we reject all that these sciences have discovered because those discoveries are "just" based on observations? Some people would do exactly that. We've seen attacks on evolutionary biology and paleontology by creationists, on climate science by global-warming deniers, and on epidemiology by tobacco companies. This kind of argument isn't new, but for me, as a scientist, it's disturbing that it's still so common.

Some commenters disputed the fact that tropical deforestation is primarily driven by cattle production. Could you explain how ranchers interact with loggers in Latin America?

The claim that tropical deforestation is due to logging and that ranchers are just putting the cleared land to good use afterward belies a fundamental misunderstanding of how tropical forests are logged in Latin America. Logging in the region is almost entirely selective. Loggers are not clearcutting the forest. They take out a small percentage of the trees--the few commercially valuable species--and leave more than 80 percent of the trees standing. They are often followed by ranchers, who use the logging roads to bring in bulldozers, but not because the land is cleared and would otherwise go to waste. On the contrary, if it weren't for ranchers and farmers clearing the forest entirely, the forest would still be extremely valuable by providing habitat for wildlife and sequestering carbon. The roughly 20 percent of the trees cut by loggers could grow back to become even more valuable. So the beef industry can't shift the blame for deforestation onto the logging industry. Both are involved, but the main driver of deforestation on Latin American is cattle ranching.

Could pastureland currently used solely by cattle be used for other agricultural purposes?

Much of the land used for beef cattle could be producing other, healthier, kinds of food. Of the 8.4 billion acres used for grazing worldwide, 3.5 billion acres is classified as "high productivity," and thus potentially usable for crops or for grazing dairy cattle. And of the 3.7 billion acres already used globally to produce crops, fully a third goes to producing livestock feed.

In the United States, for example, most of the pastureland in the eastern half of the country, as well as a good deal along the Pacific Coast, could be converted to cropland. So some portion of that land used to feed beef cattle could go to chickens, pigs or dairy cattle, or grains for direct human consumption. All in all, there are many more efficient alternatives for using land that currently feeds beef cattle but produces less than 5 percent of our protein and less than 2 percent of our calories. As I said in your blog, beef is an "inefficient" protein because it requires a lot of resources, especially land, but contributes relatively little to the human diet.

Could you explain in more detail the role that U.S. beef consumption plays in driving deforestation in Latin America?

We looked at the issue of meat worldwide, not just in the United States, because the markets for meat and for livestock feed have become global. Because of globalization, our demand for beef stimulates production everywhere, including in Latin American countries where pasture expansion leads to deforestation.

Here's how it works: If U.S. consumers ate less beef, U.S. producers would have more to export to other countries, displacing exports from Latin America beef producers. This operates through supply and demand, as we learned back in our introductory economics courses, but it's understandable even without going into details of how the market adjusts. The bottom line is U.S. demand for beef plays a substantial role in global markets.

What practical things can cattle ranchers, commodity farmers and beef eaters do to address this problem?

Our report offers a number of recommendations to reduce deforestation due to beef production, including ways that ranchers could raise cattle on less land, which would reduce pressure on tropical forests. They include pasture improvement, such as planting legumes and better-quality grasses; rotational grazing; increasing stocking rates, which means grazing more cattle per acre; and adopting systems that combine grazing with tree production. As an example, the report highlights the success of Brazil's voluntary 2006 soybean moratorium. The industry was able to reduce deforestation from soy production to nearly zero while expanding production and remaining profitable. And the report discusses the Brazil beef industry efforts to duplicate this success with its own moratorium starting in 2009. If it can do as well as the soy industry, it will dramatically reduce the impact of global beef consumption on deforestation.

We also included a number of suggestions for consumers. Changing your diet by eating more poultry instead of beef is just one of them. We aren't telling people to stop eating beef. We are recommending they eat less.

What about the environmental damage caused by CAFOs (concentrated animal feeding operations)--sometimes called industrial, or factory, farms--in the United States?

UCS has looked at production systems for meat in several studies over the years, and we've generally been quite critical of CAFOs. Although that's not the focus of this report, we included a two-page section on CAFOs, and we concluded that "the pollution, animal welfare problems, and other issues associated with CAFOs make their form of meat production an unacceptable solution to deforestation."

There's a lot more to be said about CAFOs and the grass-fed and free-range alternatives. But that issue--whether to produce any kind of meat in highly concentrated, factory-farm conditions--is a different question than whether we should change our diet by consuming less beef. That's what we discuss in this report, because from the point of view of land use and the pressure on tropical forests, a diet that limited beef would be very beneficial.

Some people who posted comments on your blog apparently believe that eating beef is a fundamental part of human biology and that it can never change. That's not the case. Most countries now consume more poultry and pork than beef, and per-capita beef consumption has dropped in the last few decades in many developed countries. In the United States, for example, per-capita consumption peaked in 1976 and has fallen by about 30 percent since to an average of about 60 pounds a year.

So we certainly can shift our diet by eating less beef and more chicken and pork. We're doing it to some extent already. And as more people become aware of the implications of beef for tropical forests, the global climate and their own health, we should see more of that happening.