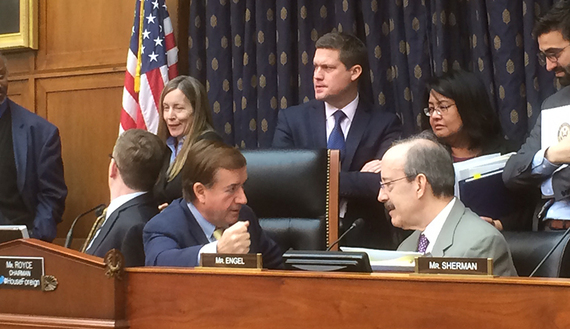 The week, President Obama signed the Protect and Preserve International Cultural Property Act (H.R. 1493/S. 1887) to close the U.S. market to plundered Syrian antiquities. Heroes for heritage, Representatives Eliot Engel and Edward Royce, proposed this legislation to comply with United Nations Security Council Resolution 2199. This binding resolution called for countries to cut off access for violent extremist organizations who use antiquities trafficking as a source of revenue. This action helps establish U.S. leadership in the global campaign to protect the heritage of historic civilizations. Yet there is still more to be done.

In the Middle East and Northern Africa (MENA), ISIL is assaulting the people and their heritage on a scale not seen since World War II. A raid last year on the compound of ISIL leader Abu Sayyaf confirmed how the terrorist organization has institutionalized the trafficking and destruction of antiquities through the creation of its own Ministry of Antiquities and the selling of permits to promote looting and illicit excavations.

These terrorists are making significant profits from this practice. Records seized showed sales worth $1.25 million in just a three month period or $5 million annualized. Counterterrorism experts state that the Paris terrorist attacks cost approximately $30,000 to finance. While not on the scale of oil revenues, clearly sales of these illicit treasures could still fund a significant number of terrorist attacks, especially with millions of sites accessible.

Cultural cleansing--the deliberate destruction of a targeted group and their heritage--is a harbinger of crimes against humanity. These terrorist acts--whether bombing ancient temples in Palmyra, plundering the Mosul Museum, or burning libraries with historic texts in Mali--land violent extremists on the front page of international newspapers and generate attention on social media. This violence strikes at the economy of the countries targeted, intimidates local populations, and eradicates our shared history.

Halting these cultural crimes requires a tough and coordinated international strategy, which the United States could use to strengthen its fight against violent extremism.

It is for these reasons that the Antiquities Coalition, with our partners the Middle East Institute and the Asia Society, released the #CultureUnderThreat Task Force Report on April 13, 2015. The Report provides practical recommendations that the U.S. government can take--both on its own and in conjunction with the international community and the global art market. It calls for actions that will increase coordination between different government agencies, international organizations, art dealers, and auction houses and will--for the first time--institutionalize the approach to combating looting. While this report primarily focuses on the largest demand country, the United States, additional reports will follow for other important stakeholders, including source countries.

Our Task Force is comprised of experts across the heritage, legal, law enforcement, military, and national security communities. Its diverse group brought a holistic approach to defining a strategy given the established links between antiquities trafficking and heritage destruction with genocide, terrorism, transnational organized crime, and money laundering.

Leadership from the White House is essential for success; President Obama took an important step by signing H.R. 1493/S. 1887 into law, but should expand these efforts to protect our own market by using executive powers to block the import of conflict antiquities from countries such as Libya and Yemen, the next targets in the War of Destruction by ISIL. And by appointing a coordinator for this effort at the National Security Council.

As the gatekeepers of the market for antiquities, museums, dealers, and auction houses have an essential role to play, as well. Above all, greater transparency and vigilance against forged documentation is needed in their dealings, especially from countries in crisis. Tougher regulations, which will restrict antiquities trafficking, will also prevent the US market being a source of financing. And they will protect responsible players in the art market from unknowingly dealing in illicit and fake antiquities.

The report notes that the United Nations can also make a major impact in this fight by including heritage protection in its post-conflict planning, peacekeeping training, and mandates. It should also refer cultural crimes in Iraq and Syria to the International Criminal Court, allowing it to proceed with an investigation as a deterrent against future crimes. Full participation by the United States in UNESCO would also allow it to lead in developing solutions for countries desperate to protect their heritage.

This week's legislation is an important step towards the U.S. taking on the leadership mantle in the fight against looting and cultural destruction globally. The bill proposed by Representative Keating to strengthen the capability of customs and border enforcement in preventing the traffic in cultural property is another crucial step in this campaign. But adoption of the Task Force recommendations would go far in establishing the United States not just as the largest consumer of art and antiquities--but also its protector.