THE AMAZON, Brazil -- Looking down from a tiny plane above the Amazon, a blanket of patchy green stretches to the horizon, broken only by occasional ribbons of brown as rivers slice through the rainforest. Its enormity makes it look indestructible.

But an arc of deforestation is sweeping across the largest tropical forest in the world, driven mainly by cattle ranchers looking for more land to meet a seemingly insatiable global appetite for beef.

Saving the Amazon, as well as the world's other great forests, like in the Congo Basin and Southeast Asia, has long been a goal of environmentalists and others. But the task has taken on new urgency after scientists proposed that it just may represent the cheapest and fastest way to slow climate change -- with deforestation accounting for up to 18% of all carbon emissions (equal to the world's transport sector).

That belief has motivated governments to develop a plan that could see rich countries in effect pay poor ones not to cut down their forests. Billions of dollars have been pledged already to the mechanism, known by the acronym REDD: Reducing Emissions from Deforestation and forest Degradation.

But making the plan work on the ground is tough. The countries that play host to these forests often have weak governments that struggle to provide even basic services to their people, let alone protect their forests.

Still, hundreds of REDD pilot projects are springing up -- some re-vamped pre-existing forest conservation projects, others re-packaged social-development programs. Governments are drafting REDD policies and legislation. This has led to a need for fast lessons about what works -- and what does not. [Text continues below photos.]

All photos and captions courtesy of CIFOR.

In the Amazon, a six-person team has spent the past two months living on a riverboat, chugging from village to village to learn how remote communities are using and protecting the forests. The team, led by Riyong Kim Bakkegaard, an Australian PhD scholar from the University of Copenhagen, is linked with the Center for International Forestry Research (CIFOR), which is carrying out a Global Comparative Study on REDD projects in Asia, Africa and South America.

Forests are home to an estimated 240 million people -- many of whom live in poverty. Understanding how people use the forests, and what makes them change their land and resource uses, is important because it can provide the keys to forest conservation as well as poverty reduction. For instance, community involvement in forest management has proved an effective tool for conservation -- and maybe a vital complement to legal protection, such as declaring an area a national park. A quarter of all forested land in developing countries is under some type of community control.

"The idea behind REDD is that we need to keep the forest standing and avoid deforestation which will emit carbon dioxide into the atmosphere. By avoiding this deforestation, we are therefore contributing to the slowing of climate change" Bakkegaard said. "This avoided deforestation could be achieved through payments to forest-rich countries, mainly located in the tropical belt around the world, to help them take measures so as not cut down their forests, and to compensate them for the loss of not harvesting the forest."

Her research is looking at lessons that can be learned from a Brazilian project called Bolsa Floresta (Forest Allowance), one of five projects being studied as part of CIFOR's REDD research in Brazil. The project is spread across a 10 million-hectare swath of the Amazon and works to conditionally improve the welfare of communities so they are motivated to safeguard the forest. It is being carried out exclusively in state-declared protected areas. However, unlike many other legally protected regions, these areas explicitly allow for the presence of local people, thus making it vital to develop mechanisms to achieve conservation in a collaborative way.

The project is funded by a mix of national and international private sector money -- from Brazil’s Bradesco Bank, Coca-Cola, Samsung, Marriott hotels and others -- and public sector support from the federal state of Amazonas. It works in partnership with local environmental authorities and NGOs. So far, one of the Bolsa Floresta projects, in the Juma Reserve, has also been developed as a REDD project. It is the world’s first project to receive the Gold Status under the CCB Standard for REDD+ projects in 2008.

"Bolsa Floresta is a mechanism to change an old dream, and then make it come true. The dream was to have forests be valued for the services they provide," said Virgilio Viana, who heads the project. "When we designed this program in 2007, this was an opportunity we saw to contribute both to the international debate showing that REDD is doable and is something that can happen on the ground. And also it was something to create a short-term (welfare) impact for the Amazon society."

Bolsa Floresta has four components. The first is a monthly cash payment of 50 Reais (US$ 33) to each household in exchange for a pledge to safeguard the forests and use only a limited amount of land to grow fruit and vegetables -- notably to not cut down more than a narrowly defined area. The second is alternative livelihood support, such as establishing cooperatives to market "green" produce, such as Brazil nuts, and add more value to existing production. The third works to improve health and education by running new health clinics and schools. The fourth empowers local community organizations.

"REDD has to have this holistic approach -- otherwise it will not change the course of history," Viana said. "I see these four components as being of general applicability, not only in the Amazon but throughout the world."

The challenges of making the project a success are huge. Illiteracy levels run at about 85%. Parts of the project are so remote it takes days to reach by boat. "The situation is very tough. We are constantly trying to find solutions," said Joao Tezza Neto, the project's scientific and technical director.

It is too early to know for sure if the project is working. But early indicators are positive: Community surveys show a new sense of optimism; the number of forest fires has dropped; and there has been a slight reduction in the rate of deforestation in the project area, according to satellite data, Viana said.

"Five to 10 years is a period where we will have a more concrete assessment of the results," he said.

But with the climate quickly changing, the world does not have the luxury to wait to know if REDD can work on the ground. Lessons are needed now, underscoring the urgency of the research work done by Bakkegaard and CIFOR.

Even though the research is ongoing and it is premature to draw conclusions, some important lessons appear to be emerging, said Bakkegaard, in a tiny village called Sao Felix on the Aripuana River as her team of enumerators sat with families to go through their 44-page questionnaires.

She said one of the biggest challenges is deciding the optimum amount to pay forest communities so they are motivated for preserving the forest. A person making considerable money from farming is less likely to be willing to give up land-use expansion options than a person who is growing just a few vegetables to feed his family. "One is going to feel much rewarded, the other is going to feel this is doing little good, thus making business as usual a preferable option."

One of the questions Bakkegaard’s team asks people is how much money they would need in compensation to be willing to give up cutting down more forest for the next 50 years. It is still early days in the research, but there are indications that compensations for such a change could be significant and perhaps driven by broader livelihood issues.

Enforcement is another challenge. Bolsa Floresta is spread out over such large and remote areas, so it is seemingly impossible to keep a close eye on all of the forests. Satellites are effective in monitoring from space and providing an aggregated deforestation rate, but they cannot identify individual wrongdoers on their own.

"It is a delicate balance between creating incentives and also having monitoring, enforcement and sanctions," Bakkegaard said.

Nevertheless, one emerging result from CIFOR's field research is that local people are often also benefiting from the improved protection of their natural resources, such as timber or fish, against outside intruders. And the Bolsa Floresta frequently makes local people more inclined to collaborate with the environmental agencies in monitoring and reporting these infractions.

Another tough challenge is to design a program that ensures that funding and support actually reach the forest communities, especially those that are remote. In some areas, communities even have little experience using cash. Their economies are largely based on the bartering of goods.

Women have been identified as being a key to the project’s success. The 50-reais monthly payments are made to women in each family. "This way the contract we make for no deforestation is with the entire family, not just the men," said Neto, explaining the project’s rationale for giving the money to women, rather than men.

For the research team, women play a crucial role in finding out what is really going in the forests. "The men usually say everything is OK with the forest. But the women see the change over the years, and are more willing to talk about it," said Kaline Rossi, a Brazilian member of the research team.

Despite all the challenges to making REDD work on the ground, Bakkegaard said she is hopeful for the future.

"I am optimistic. I know there are significant challenges, but pilot REDD programs like these are at least a start," she said. "This type of research that CIFOR is doing is helping to better understand if and how payments can actually achieve their objectives on the ground." 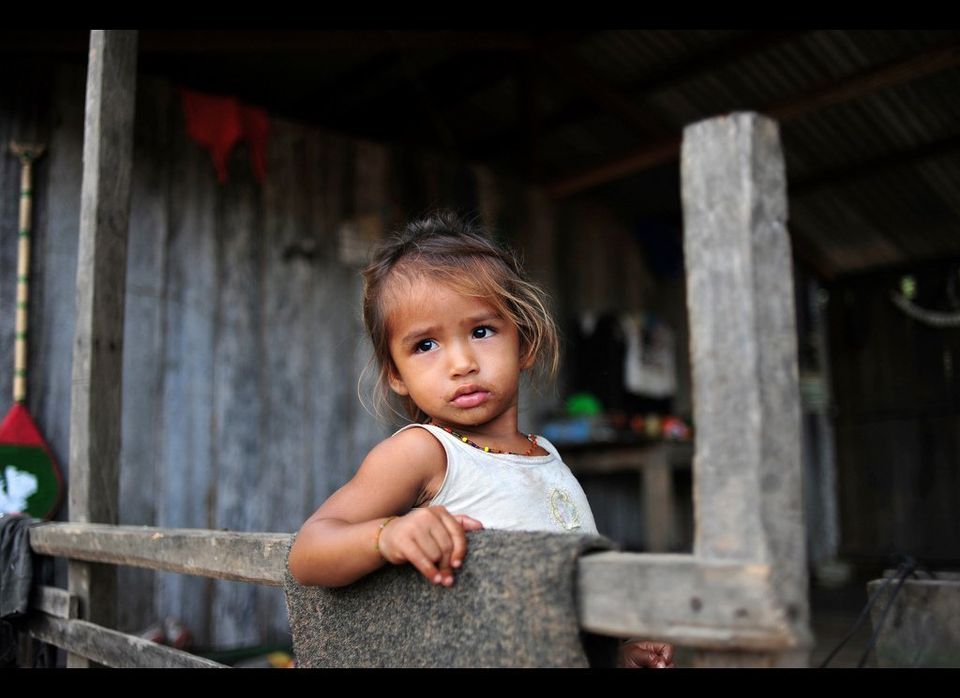