There's nothing quite like a flood to stop the good times from rolling, and the people of New Orleans know this lesson better than most. I've just returned from this amazing party town -- my first visit post-Katrina -- and, as a tourist, I wouldn't know the difference from my pre-Katrina trips. That's a good thing. Jazz, food and a party atmosphere still dominate the streets of the French Quarter, an international tourism mecca. No hurricanes are in sight in January. But the Big Easy is now well-fortified for when Katrina's relatives strike.

Behind the restored city is the newly-constructed, still-in-progress, massive, Greater New Orleans Hurricane and Storm Damage Risk Reduction System (HSDRRS). "Risk reduction" -- a euphemism for "storm protection" -- coined by the U.S. Army Corps of Engineers (ACE) defines the new understanding of a 100-year-storm. Katrina generated an unprecedented 28-foot storm surge and 55-foot waves, causing 50 major levee breaches, and damaging 34 of the city's 71 pumping stations. Heavy rainfall, 14 inches in a 24-hour period, contributed to the flooding of about 80 percent of the city, in depths of up to 15 feet. In addition to killing more than 1,800 people, Katrina was the costliest natural disaster in U.S. history, doing $159.2 billion worth of damage. This could not be allowed to happen again.

The reality is that there is no way to completely stop a storm surge from reaching the city; the best we can do is plan for "risk reduction," and resiliency in recovery. Using data from 152 previous storms, the Army Corps of Engineers (ACE) designed HSDRRS to reduce the risk of flooding from a storm surge to the one percent chance that a combination of factors will produce a 100-year storm like Katrina in any given year. The result is a gargantuan project, which included the shoring up, repairing and constructing 350 miles of levees and flood walls, construction and installation of floodgates and pump stations, construction of the largest drainage pump station in the world and the largest surge barrier in the world, at a cost of $14.431 billion. 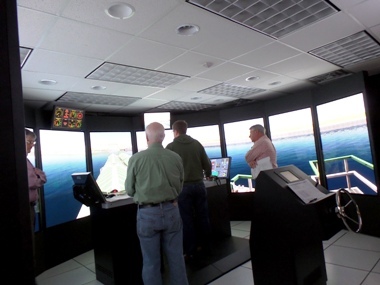 Much of the planning and testing of all innovative elements of the system took place at the U.S. Army Engineer Research and Development Center (ERDC) upriver in Vicksburg, MS. It is one of the premier engineering and scientific research organizations in the world, employing more than 2,500 federal employees and contractors with an annual research program exceeding $2 billion. Who knew? I was most impressed by their newest tool, a real-time navigational simulator that looks and feels like a boat. It is used to test how river structures that are still on the drawing board can affect navigation by modeling a variety of locations under various conditions. Real mariners drive these virtual boats through virtual waterways with a bridge that has yet to be constructed.

In another lab, hydraulic engineers make scaled-down models of structures, like a dam, so they can test how turbulence of the water coming through a dam (still in the design stage) affects the erosion of the river bed. In yet another lab, scientists study how an electric field can deter an invasive species of fish, the Asian carp, from entering the Great Lakes. And a number of scientists are working on restoring the coastal wetlands along the Gulf Coast, a natural barrier to storm surges that has been largely destroyed by development. I ran into several women scientists. Biologist Catherine E. Murphy told me:

Working for the Corps has given me a unique perspective on my field of study (fisheries biology). Studying the impacts of Corps civil works projects on aquatic habitats forces the researcher to consider both sides of an issue. On one hand, we must do everything in our power to protect the quality and quantity of our aquatic resources through conservation, mitigation and restoration. On the other hand, the Corps of Engineers is required by law to provide flood control and navigation and, in doing so, sometimes must disturb aquatic resources. As fisheries scientists, we are challenged every day with finding novel and creative solutions that balance these interests. My biggest hope is that sometime in the very near future, we are no longer called 'women in science,' only scientists.

With the public's perception that homeland security is focused primarily on terrorism, it's comforting to know that the Army Corps of Engineers is dedicated to keeping us safe from Mother Nature, which can wreak its own share of death and destruction. The ACE tackles difficult tasks that require constant vigilance and maintenance, creative solutions, mammoth and ambitious undertakings and sometimes extended personal sacrifice during emergencies.

Without exception, everyone I met at the ACE exuded a quiet sense of purpose and pride in the job they do. Meanwhile, back in New Orleans, tourists drink and dine while the bands play on; in other words, life is normal.