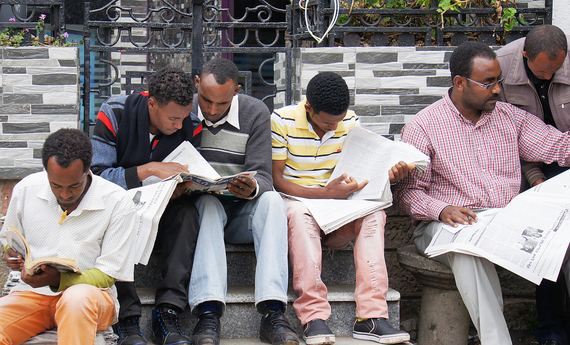 Ethiopians gather to read the news in Addis Ababa. All images by the author.

Lee C. Bollinger recently wrote about how the world can follow America's lead to protect free speech. Though I whole-heartedly agree with his assertion that the United States has the "strongest freedom-of-expression jurisprudence in the world," this is not entirely true for the freedom of the press. According to the Reporters Without Borders World Press Freedom Index for 2015, the U.S.'s rating has continued to fall to 49th place, down from 32 in 2013, when the Justice Department secretly seized 20 different personal and office phone records from Associated Press journalists to allegedly identify a source.

In most countries, broadcasting operates as a nationally owned public service through corporations. This was especially true for democratizing countries from the collapse of the Soviet Union and the Arab Spring. These countries were typically characterized by strong central control over a limited media. The U.S. media landscape, on the other hand, is almost exclusively dominated by privately owned corporations, which begs the question whether the U.S. could serve as a model of media regulation for transitional states.

While the U.S. Constitution was the first in the world to enshrine the freedom of the press, it is silent on how to regulate it. Contemporary constitutions and international conventions, however, go into far greater detail. Take Ghana, for example: its 1992 Constitution champions one of Africa's freest press landscapes. Reporters Without Borders ranks it 22nd in the world--up from 30 in 2013. What might help explain this trajectory? Chapter 12 of Ghana's Constitution not only guarantees the freedom and independence of the media, it establishes a National Media Commission to ensure it. Composed of representatives from various government and civil society groups, the commission promotes press freedoms and journalistic integrity, regulates the industry, and insulates state-owned media from government (read: political) control. Under the commission's direction, Ghana's media has liberalized. For example, when violence in Yendi threatened stability, the commission resisted directives from the government to have stories cleared through the Information Ministry. The Commission also works to ensure that elections are covered fairly.

The Washington News Council, the last such organization in the United States, closed in May of last year. Now, the closest analogy that the U.S. has to Ghana's media commission would be the Federal Communications Commission, but that is limited to broadcast media through radio, television, and now (due to the recent vote) the internet.

My suggestion here is not that the American media needs more regulation. Indeed, media commissions would regulate, but truly independent commissions can do so without government influence. The now largely overturned 2003 FCC vote that relaxed broadcast media ownership rules fell strictly along partisan lines. The vote on net neutrality was equally partisan, favoring the three Democrats on the five-member panel. Often, the FCC follows the will of whoever sits in the White House, since the president nominates its members. This certainly does not bode well for independence.

Avoiding government intrusion is crucial, especially in transitional states. Following Egypt's 2011 revolution, the media landscape initially bloomed with new sources of information, through citizen journalism, new print and online outlets, and even 16 new satellite TV channels. Yet in the moments following the 2013 popular coup that ousted elected President Mohamed Morsi, the new military regime immediately began a crackdown on the press--raiding offices, confiscating equipment, arresting journalists, and suspending the licenses of 12 satellite channels. Later that year, the popular satirist Bassem Youssef and Tawfiq Akasa's Al-Fareen channel were both driven off the air. Though both had been targets of Morsi's administration, they were finally silenced only when their criticism turned to Egypt's newest regime.

These actions are not only designed to silence dissent--they can also prevent reporting on atrocities. In the month following Morsi's ouster, hundreds of his supporters were massacred across Egypt, and the altered media landscape was largely supportive of the operation. Journalists from Al Jazeera English, on the other hand, were arrested and recently convicted of broadcasting "false news" and "siding with" the Muslim Brotherhood. 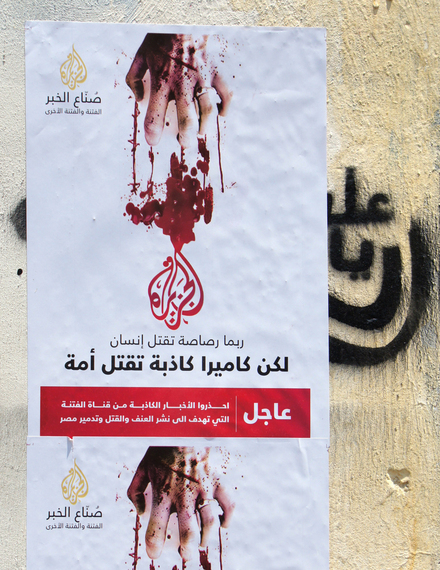 Posters widely circulated before and after Morsi's ouster, alleging Al Jazeera's support for terrorism. It reads, in part, "A bullet kills a man, a lying camera kills a nation."

We have seen the silencing of media outlets for political reasons before. For example, despite a proliferation of newspapers and independent channels after Armenia's independence from the Soviet Union, at least four television stations have been taken off the air for criticizing officials. The government of South Sudan has threatened and monitored the country's press following the outbreak of civil war in December 2013. A proposed law, which would have created a Media Authority "for the regulation, development and promotion of an independent and professional media," was immediately shelved. Just last month, South Sudan's President Salva Kiir appeared to threaten journalists: "If anybody among [journalists] does not know that this country has killed people, we will demonstrate it one day, one time. ... Freedom of the press does not mean you work against the country." This after security forces shut down three media outlets that supported a proposed peace deal.

Truly independent media commissions like Ghana's can serve to depoliticize the regulation of the media. Obviously, the form and composition of these commissions are critical to this aim. In addition, their decision-making processes must be formulated in such a way that government influence or interests in corporate gain will be diminished.

Certainly, the U.S. can and should lead the way in promoting free speech across the world. But when it comes to promoting a free press and protecting the media in transitional states, perhaps the world would be better off following the lead of countries like Ghana.