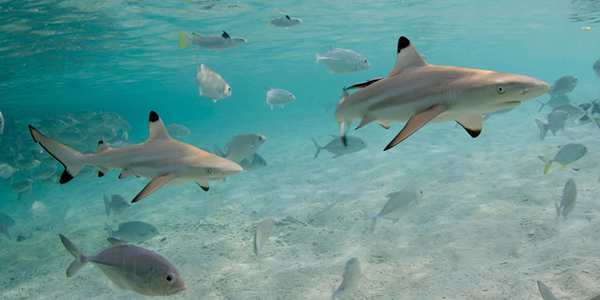 Fear and fascination have long characterized people's relationship with sharks, the oceans' great predator. You can't say the word shark to an American without invoking images from the classic movie Jaws. In one famous scene Quint, the shark hunter, sums up our primal fear:

"And, you know, the thing about a shark... he's got lifeless eyes. Black eyes. Like a doll's eyes. When he comes at ya, doesn't seem to be living... until he bites ya, and those black eyes roll over white and then... ah then you hear that terrible high-pitched screamin'. The ocean turns red, and... they all come in and they... rip you to pieces." (Jaws)

People are transfixed with these predators. Some twenty million people will tune in to watch SharkWeek this week. Vicious shark attacks grab headlines around the world. While tragic, the truth is shark attacks are still quite rare. Sharks have much more to fear from humans than we do of sharks. Each year up to 73 million sharks are threatened by shark finning, a barbaric practice where people catch sharks, slice their fins off and then toss them back in the ocean where they drown. The fins catch a high price, prized for shark fin soup, an Asian delicacy.

What's incredible is that despite this fear we're beginning to respect these great predators and recognize how important they are to keeping oceans healthy. People are taking positive steps around the world to save sharks. From California to the European Union, governments are working to end the trade of shark finning. Perhaps even more significantly Indonesia, one of the largest exporters of shark products in the world, established the country's first shark sanctuary in Raja Ampat earlier this year. While this is only one sanctuary, it represents a huge shift that will hopefully inspire other parts of the country to value live, healthy sharks more highly than their fins. Not to mention shark diving can bring in millions in ecotourism income each year. Willing tourists can't resist a chance to swim with these iconic predators.

Shark conservation and habitat protection are also gaining momentum. In Palmyra, a remote island in the Pacific, south of Hawaii, there's a living lab that helps scientists understand top predators' role in our oceans. In the Caribbean, commitments to expand shark conservation were announced at the recent Caribbean Summit of government and business leaders. Additionally, in Florida and the U.S. Virgin Islands, The Nature Conservancy and partners are growing and restoring corals, which are important habitat for sharks. By protecting the top predators we keep the whole ecosystem healthy.

"In the end, our society will be defined not only by what we create, but by what we refuse to destroy," said John C. Sawhill, former president and CEO of The Nature Conservancy. It's a pretty amazing fact that we can now include sharks in this statement. Sharks have cut gracefully through ocean waters for 400 million years. Hopefully our society will continue helping sharks thrive in years to come.