LOS ANGELES -- A group of protesters gathered in front of Los Angeles Police Department's Newton Division on Monday and marched to the neighborhood in South LA where Newton officers shot and killed 25-year-old Ezell Ford more than three months ago.

The protest was part of a broader nationwide demonstration honoring Michael Brown, the unarmed black teenager who was shot and killed by Officer Darren Wilson in Ferguson, Missouri, in August.

Protesters held signs that read, "Black lives matter," "Ferguson is everywhere -- police brutality and murder must stop" and "Jail killer cops." They also wrote the names of several people who were killed by police in 2014 in chalk on the sidewalk outside the police station, including Ford and Omar Abrego, who died after an altercation in which LAPD officers allegedly beat him. 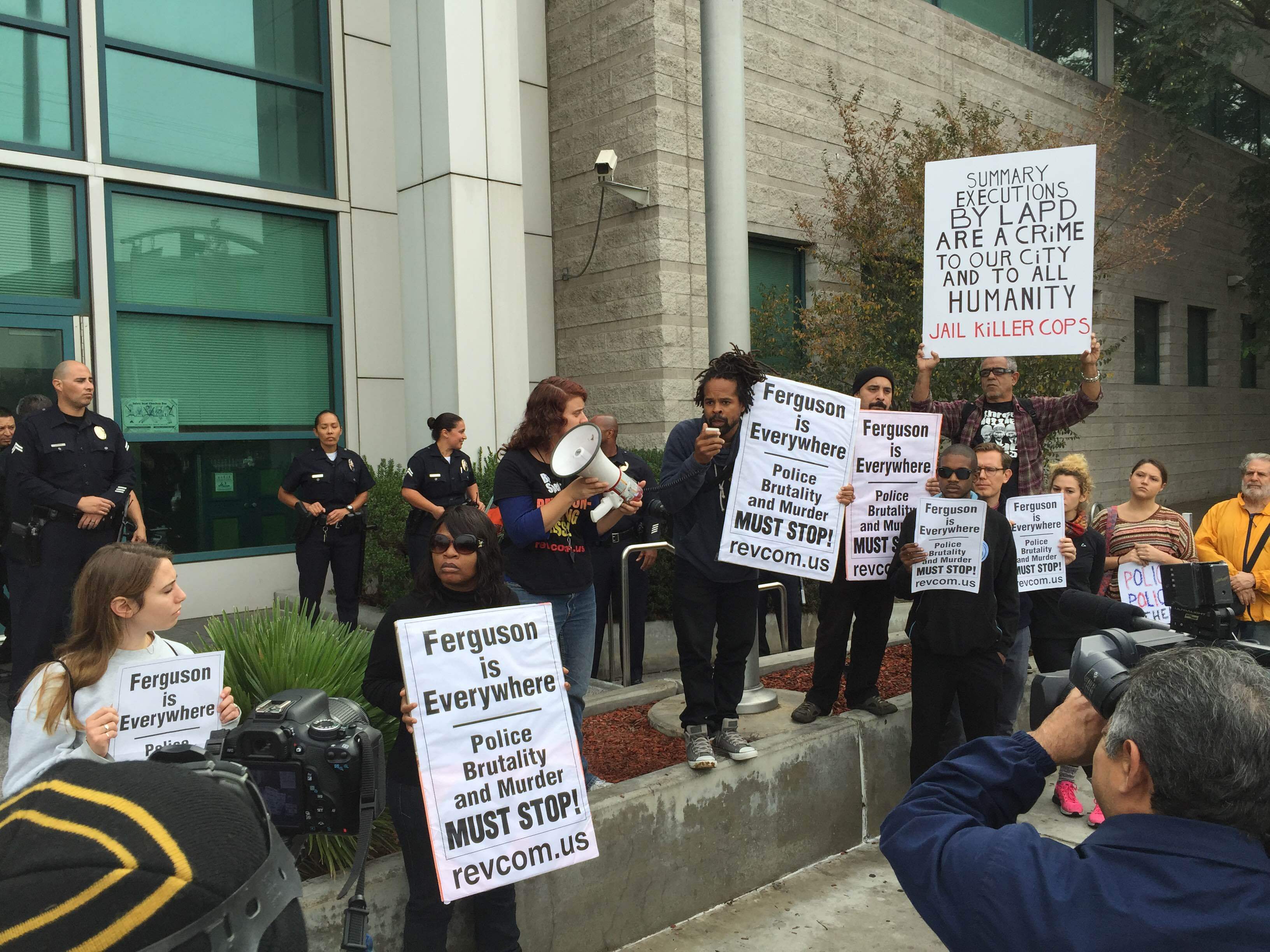 People gather to demonstrate outside of LAPD's Newton Division.

"This isn't about Ezell Ford or Ferguson, this is an epidemic across the nation," a protester said during the peaceful gathering in front of LAPD's Newton Division police station.

"I'm here because I was here in 1992 after the Rodney King verdict and not much has changed," another protester said to the group of demonstrators, holding a "black lives matter" sign.

"I can't speak on that -- all I can really say is they are here to exercise their rights, and anyone who is listening and wants to receive that message, we're happy to support and facilitate that process," Montgomery said. "The officers here are trained and instructed to help facilitate a peaceful protest as we've had this morning."

From Newton Division, the group marched more than three miles across South LA to the site where 25-year-old Ford was shot to death by LA police in August, just days after Brown was shot in Ferguson. Like the Brown case, eyewitness and police accounts of the Ford incident vary wildly. 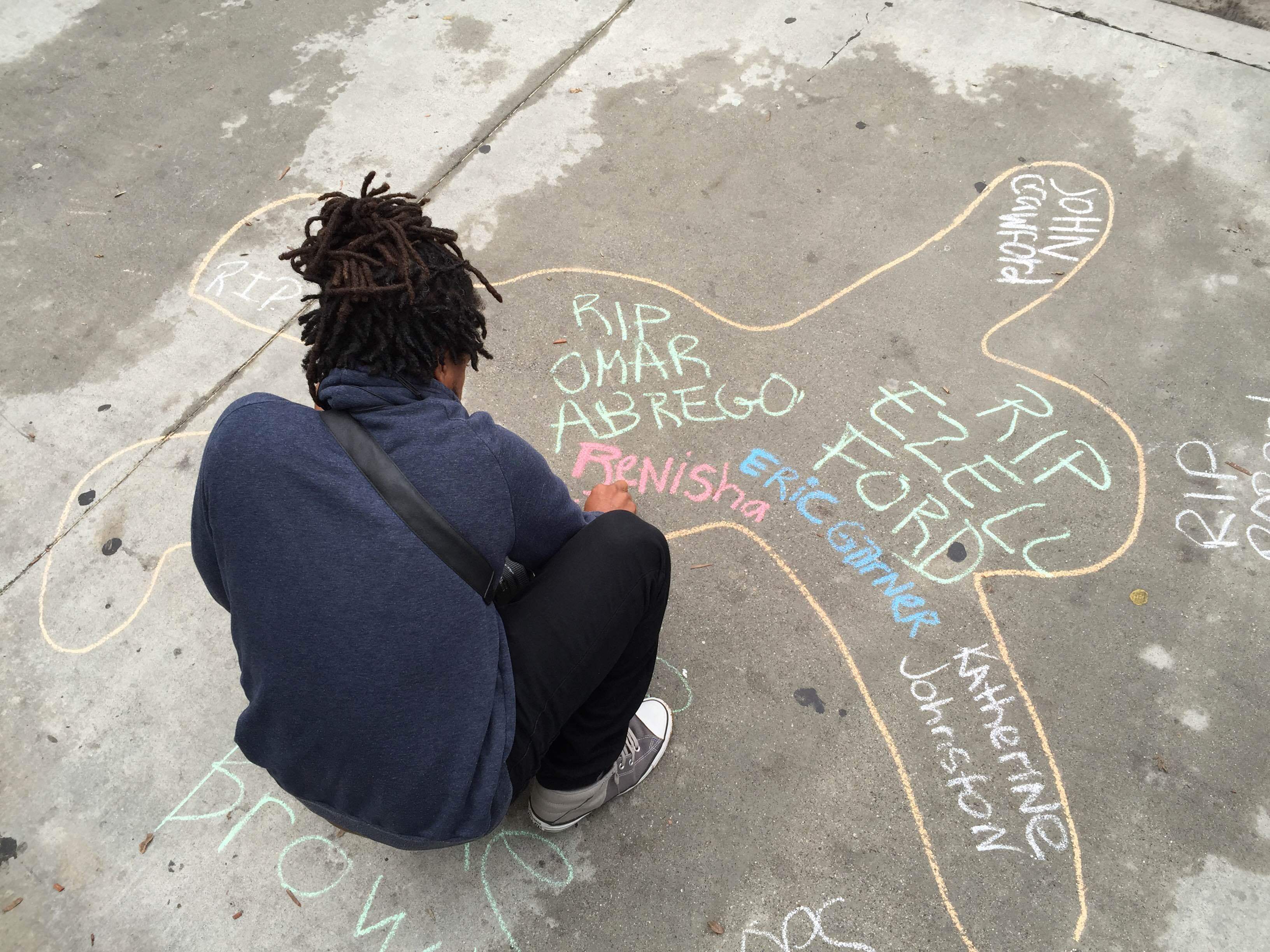 In front of the LAPD Newton Division police station, a protester draws a chalk outline of a body that includes the names of people fatally shot by police.

Police say that during an Aug. 11 "investigative stop," a struggle ensued in which Ford "turned, grabbed one of the officers." After that, "they fell to the ground," and Ford attempted to pull an officer's handgun from its holster, police said. The "partner officer then fired his handgun and the officer on the ground fired his backup weapon" at Ford, according to police. "It is unknown if the suspect has any gang affiliations," the LAPD said in a statement after the killing.

Tritobia Ford, Ezell Ford's mother, said her son showed signs of schizophrenia and bipolar disorder. Multiple neighbors and witnesses have also said that his mental state was well-known in the neighborhood.

The LAPD, which hasn't closed the investigation into Ford's death, put an indefinite "investigative hold" on the coroner's autopsy report to prevent witness testimony from being tainted.

However, in November, LA Mayor Eric Garcetti ordered the LAPD to release the autopsy report before the end of the year.

"We have been hoping to get some more witnesses to come forward before the autopsy is released," LAPD Commander Andrew Smith told HuffPost Monday regarding the report, which has still not been made public. "However, we anticipate releasing the report some time during December." 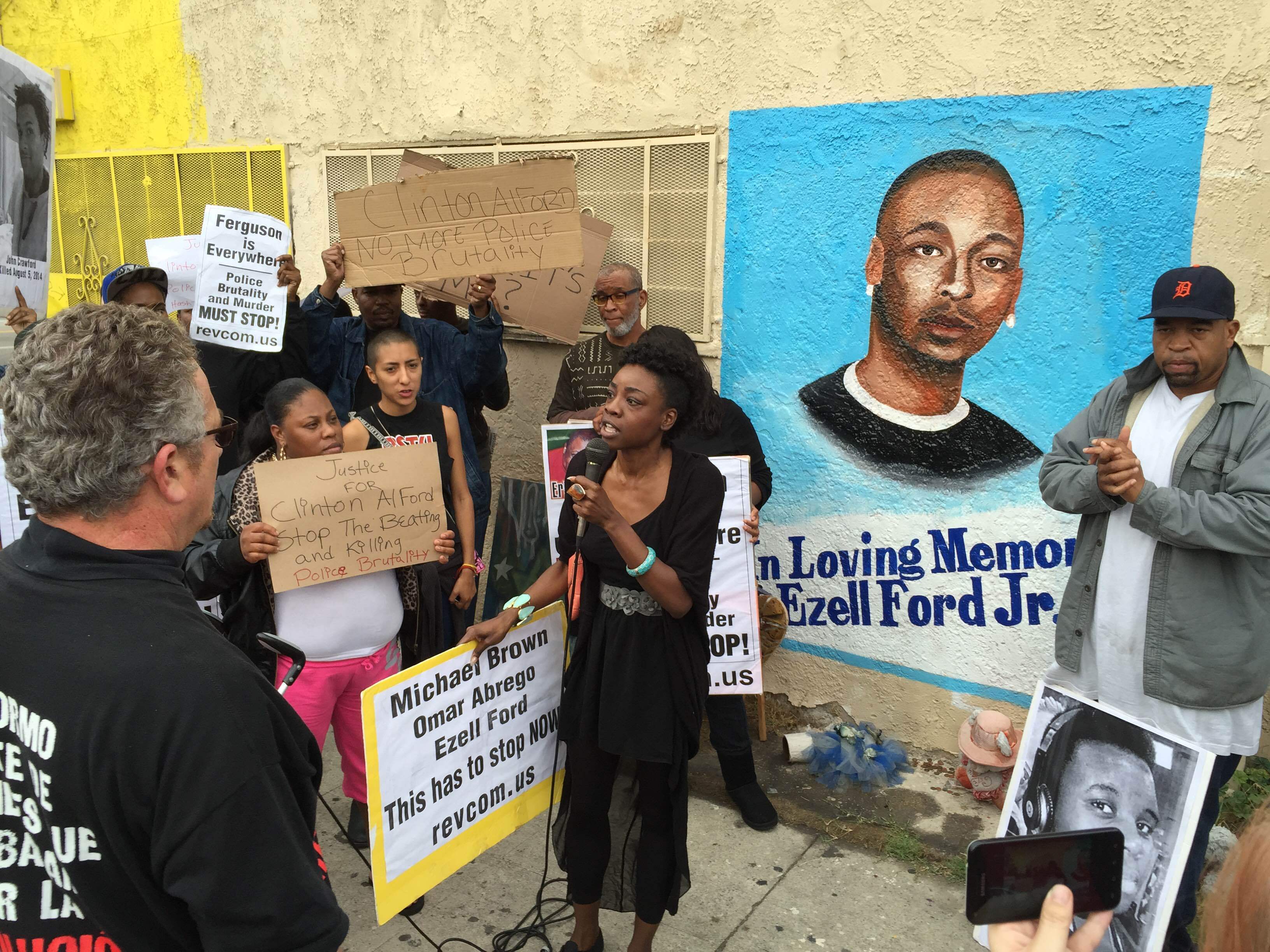 Protesters gather and speak out against police brutality in front of a Ford memorial on W. 65th Street in South LA, where Ford was fatally shot.

Steven Lerman, a lawyer for the Ford family, previously told HuffPost that he believes police withheld the autopsy report for "political reasons." Lerman called Ford's shooting "an execution" and is seeking $75 million in a wrongful death lawsuit filed by the Ford family.

Monday's protests were the latest among many that have occurred nationwide since a grand jury's decision last week not to indict Wilson in the killing of Brown. Los Angeles police arrested more than 300 people last week during protests across the city.