I am a survivor of child abuse. Starting at age four, I was repeatedly beaten and called names that no child or adult should ever be called. Then from eight through thirteen years of age, the abuse escalated to sexual victimization by a close male figure and my mother, who suffered from mental health issues. At nineteen and through my early twenties, I was re-victimized as an amateur model and again as a professional model. Now at thirty-one, I have been in strong recovery for a few years, am an author (my memoir, Washed Away: From Darkness to Light hits stores Summer 2016), speaker and mental health advocate. I understand the long-lasting effects of abuse and how it can trigger other serious mental health conditions, yet I am also a believer that full recovery is possible. On the other side of the coin, I grasp the concept that hurting people hurt people and that forgiveness is a powerful force in this world - for ourselves and others.

But when I read an article in the New York Times about John Mackey, the co-CEO of Whole Foods, and his relationship with Marc Gafni, an admitted child-sexual-abuser-turned-spiritual-leader, I couldn't turn a blind eye and continue to shop at my once-favorite store. I'll admit it, I used to love Whole Foods, and most people do. It carries an enormous variety of overly priced organic foods that are appealing to the senses; basically it's like the Saks Fifth Avenue of grocery stores. However, I refuse to support any company that openly backs a pedophile and doesn't use their platform to take a stand against something as important as child sexual abuse - an issue that affects more than 42,000,000 Americans.

So on May 25th I will be at the Whole Foods 365 launch in Los Angeles to protest co-CEO John Mackey's link to Marc Gafni; if you live in NYC, there is a planned coordinated protest underway. Mackey's ignorance as a leader to publicly evade the issues at hand enables the perpetrator, allows the stigma to continue, and brings up another question: what percentage of child sexual abuse survivors shop at Whole Foods? Bill Murray, founder and CEO of NAASCA, the National Association of Adult Survivors of Child Abuse, believes that the government-reported 1 in 3 girls and 1 in 5 boys who are sexually victimized before they turn eighteen equates to roughly 20 to 25 percent of adults who will shop at the newly launched Whole Foods 365. "365 is comparable to Trader Joes, so (Whole Foods) is most likely banking on the fact that the prices will appeal to the classes represented by child sexual abuse survivors," Murray says. However, statistically victims of child sexual abuse have a harder time in life holding down jobs, are more likely to run away from home, attempt suicide, develop fatal eating disorders, get involved in the sex industry, work as dancers, or act in pornographic films.

Matthew Sandusky, CEO and Executive Director of Peaceful Hearts Foundation, agrees about John Mackey's lack of proper handling, "(Mackey) and the Whole Foods Market Board of Directors have an opportunity to reach millions with an important message. Instead of maintaining the societal norm of silence around these issues, I would like to see them take a stand against child sexual abuse publicly...getting the message across that we can no longer remain silent."

It's no secret that survivors live in silence, and society has a responsibility to help end that. When Nancy Levine, a teenage sexual abuse survivor, survivors' advocate and activist, tried to contact a slew of journalists about the protest, she was repeatedly turned down. "I...consistently heard, 'Yes, but Gafni was never charged with a crime.' The two largest PR publishers refused to publish a press release...for much the same reason. The statutes of limitations surrounding sexual abuse create cascading obstacles to exposing predatory behavior."

Regardless of whether or not Gafni was ever charged with a crime, or in spite of the statutes of limitations, we are obligated as a society to support victims of child sexual abuse and give them a voice. If you were violated, wouldn't you want someone to help you, in any capacity? Now imagine you were a child and assaulted - it would change your life, maybe even save it, if people within the community stood up and gave you back the voice that was stolen from you.

Perhaps the biggest personal kicker about this whole ordeal goes back to a statement that Marc Gafni made concerning one of the most publicized cases about a girl he repeatedly sexually abused starting in 1980 when she was only thirteen years old, claiming that they were in love. "She was 14 going on 35, and I never forced her." His statement triggers memories of how the perpetrators of my past used and abused my body and then dismissed the situation. There were always excuses, and I felt as though I couldn't use my voice. For the victims of child abuse there is nothing to be left with but pain and silence. And the perpetrators get the justice? I don't think so.

"The whole thing smells. This is rotten. (Mackey) is oddly claiming to be 'silent' about his relationship with Marc Gafni, an admitted child sex abuser, yet continues to openly celebrate their close connection through multiple links and references on the official Whole Foods web site and its Blog. This is tantamount to institutional enabling," Murray said. "(Mackey) and the Whole Foods Board of Directors have a fiduciary responsibility to the stock holders, to disavow any and all links and tacit support to an admitted child sexual abuser. As a community we need to bring light into the shadows of the often taboo issues of child sexual abuse ... to stop the silence and change the culture." 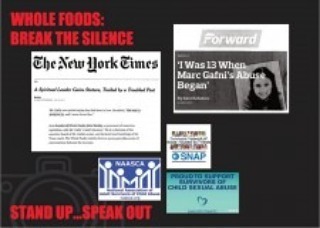 Author of Washed Away: From Darkness to Light