(RNS) Protestant clergy rarely preach about mental illness to their congregations and only one-quarter of congregations have a plan in place to assist members who have a mental health crisis, a new LifeWay Research survey found.

The findings, in a nation where one in four Americans have suffered with mental illness, demonstrate a need for greater communication, said Ed Stetzer, executive director of the evangelical research firm, a ministry of LifeWay Christian Resources, which is an agency of the Southern Baptist Convention.

When it comes to mental illness, researchers found:

“When we look at what we know statistically — the prevalence of mental illness and the lack of preaching on the subject — I think that’s a disconnect,” said Stetzer. 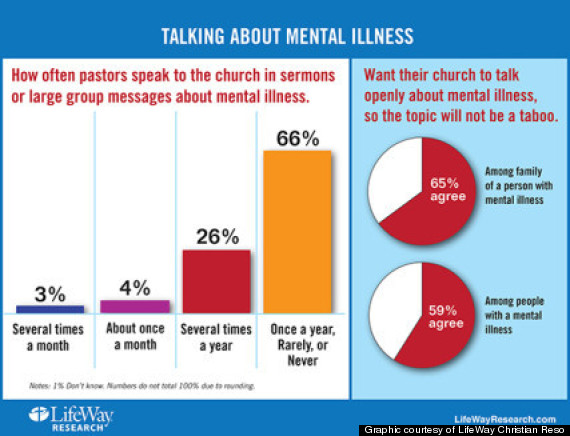 The survey taken among evangelical and mainline churches was funded by Colorado-based Focus on the Family and an anonymous donor whose family member suffered from schizophrenia. It included the perspectives of pastors, churchgoers who have suffered from mental illness — depression, bipolar disorder or schizophrenia — and family members of the mentally ill.

Author Kay Warren commended the survey’s findings and said she and her husband, megachurch pastor Rick Warren, have been vocal about the “terrible scourge.” Their 27-year-old son, Matthew, suffered from mental illness and killed himself last year.

She urged church leaders to not only preach about it but allow those struggling with mental illness to give testimonies to their congregations.

“I would encourage any pastor or church leader, yes preach a message, but put in front of your people those who are living with mental illness so they can share their stories and become human in that process,” she said in a conference call Monday (Sept. 22) about the survey.

In contrast to the findings about the relative scant attention the pastors give to the subject, almost seven in 10 mentally ill people said churches should help families discover local resources for support.

While 68 percent of pastors said their church maintains a list of local mental health resources for church members, just 28 percent of families are aware of such resources.

Jared Pingleton, director of counseling services at Focus on the Family, said pastors are often turned to for help but they may not have had any seminary or Bible school training to help them meet parishioners’ mental health needs.

The survey found that less than half of pastors — 41 percent — said they had taken seminary courses on caring for the mentally ill.

Daniel Aleshire, executive director of the Association of Theological Schools, said about 35 of his association’s 270 member schools offer master’s degrees in counseling or in marriage and family therapy. A recent study by Baylor University scholars found that of 70 seminaries with Master of Divinity programs, a majority offer elective counseling courses but few students take them.

Despite LifeWay’s finding overall reticence, almost a quarter of pastors surveyed — 23 percent — said they had personally struggled with mental illness.

“I think it helps us to understand why some pastors have a sense of empathy, not just sympathy,” said Stetzer. “It surprised me in the sense that people were very forthright about it.” 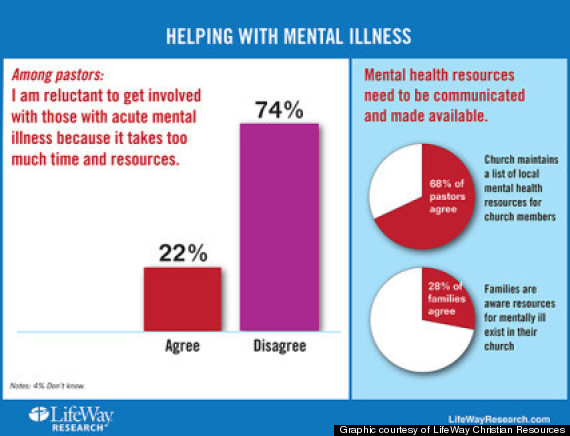 LifeWay found that slightly more than a quarter of pastors — 27 percent — said their church has a plan for supporting families with a mentally ill member.

Focus on the Family has developed resources for pastors based on the research, including “practical tools and tips about how to make a referral to a trusted Christian colleague,” said Pingleton, a minister and clinical psychologist who was on the conference call with Kay Warren.

He said shared worldviews are “vital” in the referral process “so that the pastor knows that they can refer a member of their flock, one of their sheep, to someone who will not, as it were, fleece them.”

“If I’m going to get my heart worked on, I don’t really care if the cardiac surgeon is a believer or not,” she said. “I want the best.”

The LifeWay survey did not specifically address the issue of the faith of mental health professionals.

The survey results are based on a May 7-31 survey of 1,000 Protestant pastors and has a margin of error of plus or minus 3.1 percentage points. Smaller random samples of mentally ill and family members were drawn from a pre-screened national panel.