A Saturday morning encounter with some anti-Palineers enlivened my trek up and down the Front Range in search of the Colorado election story. Sarah Palin herself was speaking at a breakfast fundraiser in a jet hangar at the old Centennial Airport, just south of Denver. Perhaps because John McCain was a Navy pilot, his campaign has always had a thing for tarmac moments. But a thousand dollars seems like a lot to shell out for a cup of coffee. The loose coalition of Colorado Women Against Palin plotting strategy at the nearby Starbucks wasn't paying that much and was just as enthused, soon driving up the road to the airport location the county had given them for their protest. Of course, the location along the grassy verge outside the airport was nowhere near the Palin event. For the next three hours, only humble pick-up trucks passed that way, honking appreciatively though they were. The guests' cars and SUVs--and there had to have been a passel of SUVs, since this is Colorado--took a different route.

By now the Palin cadres have formed ranks. At least, those women fervent enough to stand for hours either for or against her have fixed set positions. Therefore, the Colorado Women against Palin are what you would expect: an educated motley crew of all ages for whom the Republican vice-presidential nominee calls forth wit and outrage in equal measure. While they are gathering along the median strip (eventually, the sheriff's officers guarding the airport's side gate will make them move to the far sidewalk), a different band of politicos piles out of a large van; several unfold a table and set out thermoses of coffee and doughnuts. "For our friends here," says the lady in charge, pointing to the Palin protesters. One of her helpers, a young man in baggy shorts, begins to carry cups across to the median strip. However, it's hard to wave a sign while sipping coffee; he doesn't have many takers. A woman rolls her wheelchair across the road to the guardians of the gate. Whatever the conversation, it's clear from the gestures that she's not getting what she's asking for. She rolls her chair back into the street and halts. The traffic is just frequent enough to impede progress, and she seems uncertain whether or not it will stop for her. The Palin protesters wave harder, cheering when the passing drivers beep their horns. Eventually, the young man in baggy shorts lopes across the road to help her back in fits and starts.

The intrepid woman is Dawn Russell. She and her group of friends have come out to the airport for ADAPT, a national grass-roots disability rights group. Dawn had been hoping to present Governor Palin with the same letter that, after repeated assiduous efforts over time, she had finally placed in the hands of Michelle Obama. It's clear that for today, at least, Sarah Palin will not have an opportunity to read about legislation (S 799 and HR 1621) that would end the institutional bias in Medicaid that shunts people with disabilities into nursing homes and similar institutions. Dawn does not seem discouraged. "At last, I'm getting involved, doing something about it," she says. "Nursing homes are a prison--I don't want ever to go back." Knowing that I'm a journalist, she asks, "How can you manage to stay nonpartisan?" Since this is the most thoughtful question anybody, including other journalists, has asked me in a year on the campaign trail, I pull up a folding chair for a chat.

Prompting Dawn's question is her struggle with feelings about both presidential tickets. "What was so upsetting to our community," she says, "was Palin's use of the words special needs." Dawn's point is that at heart she and her friends are just like everybody else; they don't want to be special. But she's trying to withhold judgment on Palin until she can present her case and get a response. Even more difficult are her mixed emotions about the Obama-Biden ticket. Doubt has begun to niggle at her largely charitable view of humanity. "In 2003, we [ADAPT] walked from the Liberty Bell to the Halls of Congress. A hundred forty-four miles in fourteen days. When we crossed into Delaware, Joe Biden was waiting and met every single protester. Then a year later in Denver, he remembers us! He gets excited. Genuinely excited. 'ADAPT is here!'" I can imagine no greater tribute to Joe Biden and wonder where Dawn is going with her troubled thoughts. "When," she asks me, as if I might have the answer, "will they [Biden and Obama] quit talking about the middle class! What about us poor people?"

Dawn returns to her contemplation of Sarah Palin. "There's this conflict she doesn't even realize she's in," Dawn says, speaking from the perspective of experience about disability. Across the road from us, a local TV videographer is moving in a crouch along the row of protesters. "KYGO! Oh yeah!" a ten year-old girl crows as he approaches her. Mothers Against Sarah Palin wave signs hand-lettered "Incontinence and Incompetence," "Unstable and Unable," "Abort Palin." A veteran carrying a heavy flagstaff walks the long row of women and children. His large American flag ripples in the stiff morning breeze. Colorado is an exceptionally windy state, as I've found during my sojourn here. Such a small discovery is one of the pleasures of the trail. Even more satisfying is heading out to get one story and finding in its place another. 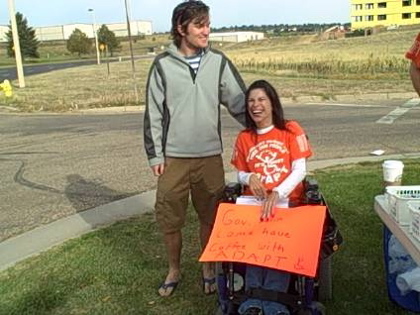 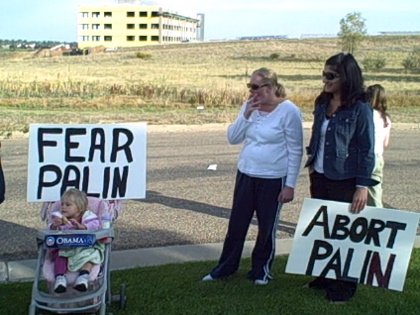 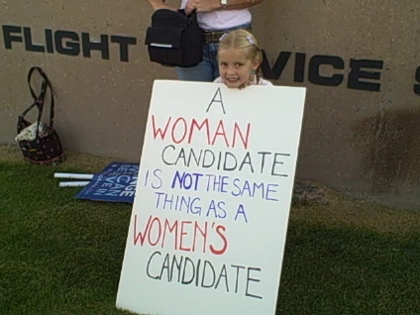 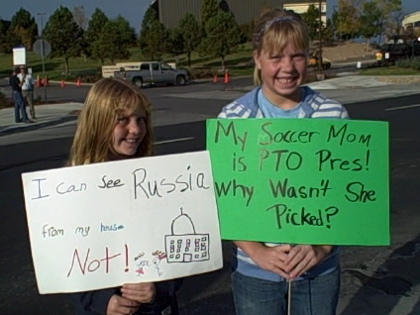 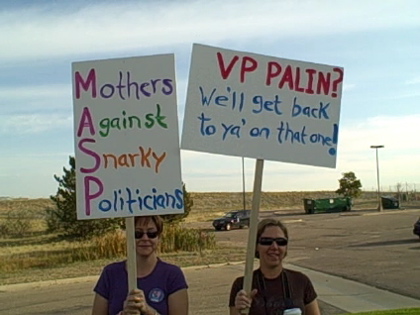 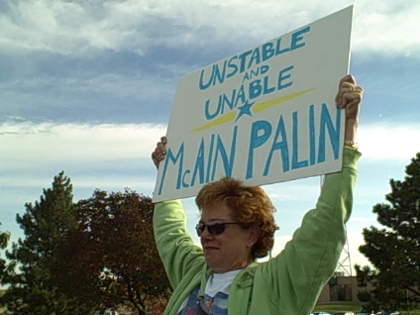 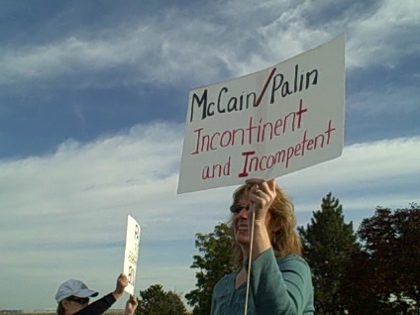