Hundreds of people rallied in New York City on Thursday evening to call for justice for Saheed Vassell, an unarmed black man who was shot by police the day before.

Activists gathered in Crown Heights, Brooklyn, where New York City police shot at the 34-year-old father 10 times and killed him on Wednesday.

Police were responding to reports of a man wielding a gun, but later determined that the object Vassell had allegedly pointed at them was “a pipe with some sort of knob on the end of it.”

Standing on the corner where her son, who had bipolar disorder, had been killed the day before, Vassell’s mother, Lorna, gave an emotional address to the crowd.

“He did not deserve [for] a piece of iron in his hand for a cop to kill him,” she said, adding that her son came from a good family and was well loved by all who knew him. “It’s unjustified, and I want justice. They murdered my son, and I want justice for him.”

She also questioned why police didn’t simply shoot her son in his leg ― echoing the grandmother of Stephon Clark, another unarmed black man shot by police last month in Sacramento, California. Protests over Clark’s death have not stopped.

At the rally for Vassell, Women’s March leader and activist Linda Sarsour, who is from Brooklyn, called for the officers who shot Vassell to go to jail.

Another unidentified speaker at the rally demanded an investigation into the killing.

“They’re shooting us like birds, and it needs to stop,” he said. “People have to be held responsible for this. We need to check these police officers and lock them up.”

On Thursday, the office of New York Attorney General Eric Schneiderman said it was opening an investigation into Vassell’s death.

Mourners at the rally in Brooklyn chanted the now-familiar slogans against the repeated police killings of black people.

“No justice, no peace,” activists cried out. “Say his name!”

“Saheed!” the crowd yelled back.

A growing crowd of protesters then took to the streets of Brooklyn, marching to the 71st Police Precinct blocks away.

A massive crowd is now in the streets of #Brooklyn marching for #SaheedVassell #BLM #StolenDreams pic.twitter.com/38scB5lIHE 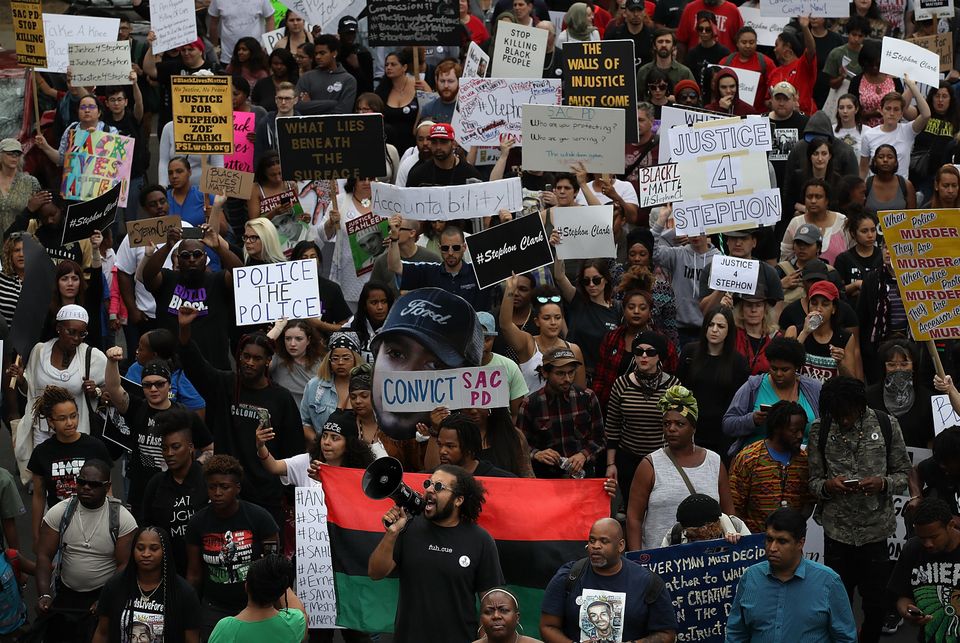 1 / 11
Black Lives Matter protesters take to the streets of Sacramento during a march and demonstration on the 50th anniversary of Martin Luther King Jr.'s assassination.
Justin Sullivan via Getty Images