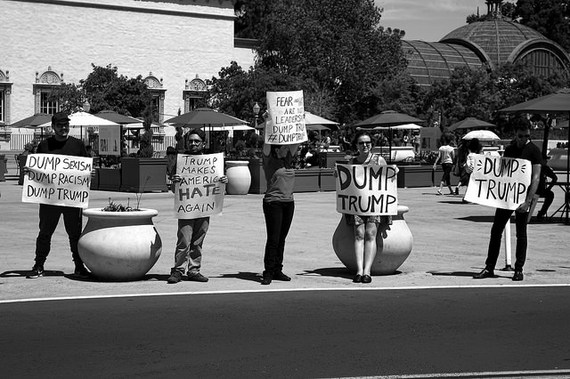 My 16-year-old daughter asked to attend a Trump protest at her high school. I thought it was a great idea, but her mother said no. To hear my daughter tell it, her mother is a right wing, conspiracy theorist. But she, and I, missed her mother's point altogether at first. She didn't believe the protest was a waste of time, or even that our daughter wasn't allowed to attend. She wanted to know what happens after all the protesting. If our daughter felt so emphatically that Donald Trump's presidency isn't only a mistake, but a blight on our country, what would she do to make a difference?

The fact is, we white people are used to getting our way without much effort. Let's be honest. Dr. Robin DiAngelo, came up with the term "white fragility," which she describes as, "a state in which even a minimum amount of racial stress becomes intolerable, triggering a range of defensive moves. These moves include outward display of emotions such as anger, fear and guilt, and behaviors such as argumentation, silence and leaving the stress-inducing situation." So I'm going to go out on a limb and say most of us aren't used to doing more than signing our names to a Change.org email, posting a meme on social media, or timidly stating our displeasure to a spouse, or a friend.

This is a time for action. It's a time to stand against the evil that is about to take the helm of our country, moving it back three or four decades when only the privileged rich, white, and mostly male thought the country was great in the first place. What can we do?

Politifact, a fact checking organization, shows that 26% of what CNN says is Mostly false, false, or outright lying. The same can be said for FOX News at 59%, 35% for ABC, 45% for CBS, and 41% for NBC. These numbers don't include the half-truths these stations share, or the incitement of fear mongering they create among their viewers.

I started getting my news from the BBC, UK version, to get a more balanced, less agenda-ized view. I listen to PBS, NPR and other online news organizations, which tend to reference where their information comes from. Also, The Conversation, and more academic online and print sources back up their journalism with evidence-based stories.

Check your facts
Lately, much as been written about the influence of false news. Someone recently shared with me how Donald Trump said if he ran for president he would do so as a Republican because Republicans are stupid and gullible. That was a popular meme on social media that ended up not being true. Yet, people looking to validate their perspective that all Republicans are stupid are still sharing it.

The truth is, we all want to be right. Research shows that when we're confronted with contradictory information than what we believe, "we adhere to our original belief even more strongly." Educated people, it appears, are the worst at this.

Stop being defensive
Let's avoid talking about those people. That's part of what got us into this mess. Whenever we see people as others, they become less human. This is the way Donald Trump, Mike Pence and many of their supporters see LGBT people, immigrants, and African Americans. The signs "Love Trumps Hate" were prevalent during the election, but have slowly disappeared as disillusionment has set in. If our ideals are about inclusivity, they shouldn't change because they didn't get elected into an office.

Get involved in politics
Beyond the emailed form letters you send to congress, which come from other organizations, write some of your own. Send emails and call with your opinion. On a tour of California's State Capital last year I was shocked to learn that any given bill has less - much less - than 1,000 inquiries or comments. California is the sixth largest economy in the world and yet the citizens have very little involvement with how it runs.

Find out who your senators and congress people are for your state. Sign up for their newsletters, from legislators you support and those you don't, to learn what's going on. Share your voice and opinions. This is how government is supposed to work in the first place!

Our government officials are sneaky and pass legislation when no one is looking. For example, the North Carolina bathroom bill, HB2, which obliterated LGBT and low income protections, created a bill that gave legislators five minutes to read before it was approved and fast-tracked into law. Do a web search to find out who your legislators are for your state and what is going on.

Create Change
If you support human rights, feminism, LGBT causes, environmentalism, and oppose poverty, and big business infringement, say so! Send money to organizations you believe in, even if you don't get a tax credit for doing so. $5 a month to protect human life and preserve our planet is worth giving up a cup of coffee a week. And if you can't find an organization you support, then make one. Reach out to the people in your neighborhood, community, or city.

It's important our voices are heard, but more important that we're making an actual difference in people's lives, while working toward the unity, inclusiveness and education we want for our country. It's time to get to work.