Three years ago I beat back prostate cancer, and I owe it all to the Bragg Peak.

Bragg Peak is not the name of a mountain, but of a remarkable physical principle, named for William Bragg, a British physicist who discovered it in 1903. It makes it possible for doctors to cure cancer using proton beam radiation therapy.

They do so on a large scale at the James M. Slater, M.D. Proton Treatment and Research Center of the Loma Linda University Medical Center in California, 60 miles east of Los Angeles City Hall. Since 1990 the center has treated more than 14,000 cancer patients with protons in a 200-foot long facility built for the purpose. Nearly 9,000 of them were prostate cancer patients, most of whom returned home with their cancers cured, and with few if any side effects. The treatment is painless, non-invasive, and covered by Medicare and most insurance providers.

Radiation, whether employing protons or conventional x-rays, destroys cancer cells by damaging their DNA so the cells cannot reproduce.

When x-rays pass through the human body, they destroy tissue from the moment they enter it until they pass out the other side, attacking healthy cells as well as cancerous ones. But the sub-atomic particles called protons can be directed to focus only on cancerous tumors, leaving healthy tissue virtually untouched. The proton beam enters the body at a low energy level, then is controlled to increase dramatically just at the site of the cancerous tumor before it dissipates entirely. The point where it reaches its maximum strength is called the Bragg Peak. On a graph it looks like a ski jump.

Fig. 1 shows the path of a single proton. Fig. 2 shows how conventional radiation (red) delivers radiation throughout the body while proton radiation (blue) can be controlled to concentrate its energy on the target tumor alone. (University of Florida Proton Therapy Institute)

Tens of thousands of cancer victims have benefited from this discovery since it was first used to treat cancer patients more than fifty years ago, yet until recently proton beam therapy was described in most medical literature (if at all) as new and experimental. Not at all; it's a proven, mature technology that has been hiding in plain sight for years.

Furthermore, many radiation oncologists and urologists are unfamiliar with the technology, often dismiss it as "experimental" or "new-agey." One patient was told that if he wanted to go to Loma Linda for proton therapy he should find a new urologist. Another doctor suggested that the many proton patients who express their satisfaction with the treatment are nothing but a "cult." This ignorance will wane as more and more hospitals begin operating proton radiation facilities and curing an impressive number of patients.

Physicians who work with proton radiation therapy and patients who have been treated by it strongly disagree with the skeptics. The advantages of a treatment that destroys the cancer while sparing healthy tissues are obvious and compelling. In the foreword to a new medical textbook on proton therapy, Dr. Herman Suit of the Massachusetts General Hospital says: "any ... treatment that achieves a higher radiation dose...to the tumor [than it does to] normal tissues is by definition a superior treatment."

Dr. Jerry Slater, Chief of Radiation Medicine at Loma Linda, says that x-rays can't tell good cells from bad ones, but "with protons, I can always put the beam where I want it."

As for cost, Loma Linda radiation oncologist Dr. Carl Rossi told me that it soon will be possible "to reduce the length of treatment from 9 weeks to 4 without any increase in complications or decrease in efficacy. That alone drops the price by over 50%, since radiation therapy cost is based largely on the number of treatments."

Rossi points as well to new technologies in patient positioning and imaging that will further cut treatment time. And a new low-cost proton delivery system is now under development that, if tests prove successful, will cut hospital facilities costs from $120 million to $20 million.

One factor that keeps controversy alive is the lack of clinical trials comparing proton radiation to other forms of treatment. It is understandably difficult to find volunteer test subjects willing to participate in trials where one cohort would be exposed to significantly more radiation and consequent side-effects than another. But long term studies of patient experience following treatment are possible, and they are showing marked advantages for proton radiation therapy.

In an earlier Huffington Post article I described how I had reached the decision to have my prostate cancer treated by proton radiation at Loma Linda. We were so convinced it was the right course to take that my wife Joy joked: "If you don't want to go there, I'm going to go alone and take your prostate with me!"

Joy and I flew to California in late September 2007. We rented an apartment steps from the hospital, and had our car driven out by an auto delivery company (cheaper than renting one). I met my doctor the next day, had a few tests, and began treatment a week later.

There were 45 days of treatment, five days a week for nine weeks. Each day's treatment took only a few minutes, only seconds of it involving actual radiation. All of it was covered by Medicare and my Medicare supplementary insurance. We returned home in early December. In the 2-1/2 years since then, I have had only minimal and temporary side effects of any kind. I have a follow-up examination with my urologist every six months. The PSA has dropped to a barely detectable level. 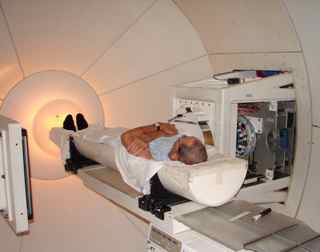 About to receive my daily dose of protons

Loma Linda University Medical Center was the first hospital in the United States to use protons to treat prostate cancer patients. Six more are in operation today, with five other proton treatment centers planned or under construction in the United States and nearly fifty more abroad in 15 countries (26 in operation; 19 more planned or under construction). Worldwide, more than 60,000 cancer patients have been treated with protons.

With the number of proton treatment facilities expanding each year, the cost of treatment steadily dropping, and the high success rate proton beam therapy is achieving, it will soon replace surgery as the "gold standard" for treating prostate cancer, and for many other common forms of cancer as well. In 1903 William Bragg didn't even know what a proton was, but the particle behavior he discovered more than a century ago has led to a bright and better future for tens of thousands of cancer victims.

Operating Proton Centers in the United States, as of April 2010: