There has been a lot of stuff going around the Internet about "fake geek girls," very attractive women who only pretend to like nerdy pastimes in order to prey upon the better natures of hapless men. As a father of 8- and 6-year-old girls who have picked up my love of comic books and video games, I have some opinions on that.

There is a segment of the geek community that is actively hostile towards women. Lonely men who -- because of their own socialization issues -- have an emotionally regressed idea of who women are as people. While they believe in dragons and superheroes, a woman who is also into comics or games with her own point of view and interests is unimaginable to them -- so they believe such women must be frauds. 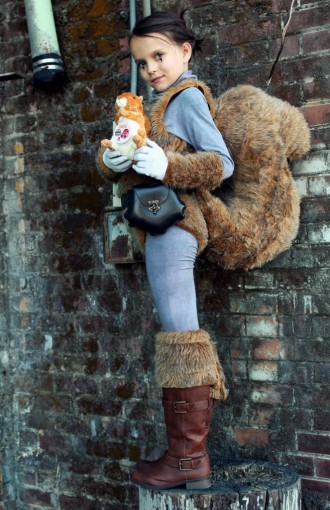 I can only speak from experience. My daughters want to be like Diana, warrior princess of the Amazons. They spend hours creating avatars to represent themselves as they explore lands they've created in the video game Little Big Planet. They argue over who gets to be Amy Pond and who has to play as The Doctor. Their love of these things comes from a place far more pure and honest than any fanboy I have met.

And yet I know, that as they get older and attend a con or two, there will be men there who will treat them rudely. Men who see them as less than people because of their gender. They don't even need to go to the cons for that. It's started already.

In first grade, Anya came home crying because some boys at school made fun of her for wearing a Spider-Man t-shirt. Superheroes were for boys. If the boys had listened, she could have told them that the Spider-Man on her shirt was actually drawn by original artist Steve Ditko from an issue written by his creator Stan Lee-- but she was never given that chance. She got over it, but she never wore that shirt to school again. That made me sad.

As she has gotten older, Anya has become more confident in her geekdom. We've talked about how heroes are not just for boys and she proudly wears her superhero t-shirts to school. She dressed as The Huntress last Halloween. Her sister was Power Girl. They hold strong opinions on whether Wonder Woman could beat Captain Marvel in a fight. 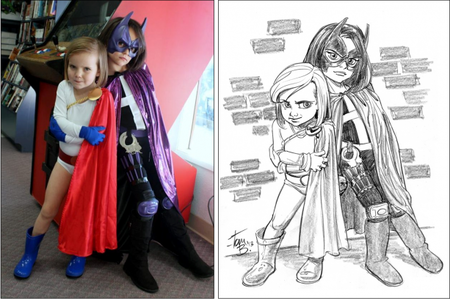 Tom Bancroft, the lead animator from Pocohantas and Mulan, saw Anya and Stella's Huntress/Power Girl photo online and thought they were cute. He drew them as Disney girls and sent them his original drawing.

At this point, Anya is far more knowledgeable about comic book heroes than any of the boys in her class, and I like it that way. It beats the crap out of that toxic blend of Barbie dolls and Disney Princesses that mainstream society has determined are what she is supposed to like.

It's not that I care if the girls like Disney Princesses, but I think it is important for them to be able to articulate why they like them.

Belle is smart and loves books. Merida is brave and daring. Tiana is building a business through hard work and determination. Those are qualities I admire and I want my girls to admire and emulate those traits.

But once the movie is done, Disney sells girls a concept of a "princess" that is little more than a tiara and pretty clothes. All of the wonderful characteristics that made the princesses into characters worth emulating -- that made them into heroes for young girls -- are purged in favor of generic beauty and a blandly passive persona.

Flattening the wonderful character of Merida from Brave so that all that matters is that she looks pretty and wears a tiara is like reducing a conversation about Hillary Clinton to her hairstyle and pantsuits. It's insulting to the woman being discussed.

My girls have tiaras and gowns in their dress-up box right next to their capes and masks. They have a drawer full of Barbie dolls that live in peaceful coexistence with their action figures. But I think it is important for them to know that looking pretty is not the only option they have in life, nor is it the only metric by which they should judge themselves or other girls.

Too often, the concept of a princess is not used as a way to empower girls, but instead to limit their choices, to enforce upon them a very narrow definition of femininity and to keep them in their place -- a gilded pink cage made from rhinestone tiaras and plastic high heels.

My girl is no princess. She doesn't need to be rescued. She is the hero of her story. And no one better forget it. 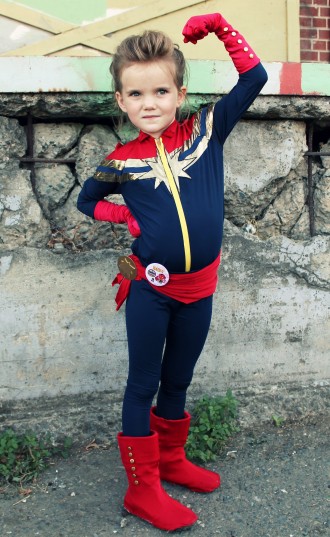 This post originally appeared on Women You Should Know.

Our very special thanks to Patti Marcotte, John's wife, who took these amazing photos of her superheroic family -- in full costume, no less -- to share with us.

YOU SHOULD KNOW... The girls' costumes are always MADE BY HAND. This year's Squirrel Girl and Captain Marvel get-ups were a collective effort by the fab Marcotte foursome and their dear friend, Adrienne Hebb, who is one badass seamstress... guess you'd need to be to get through all that fur. 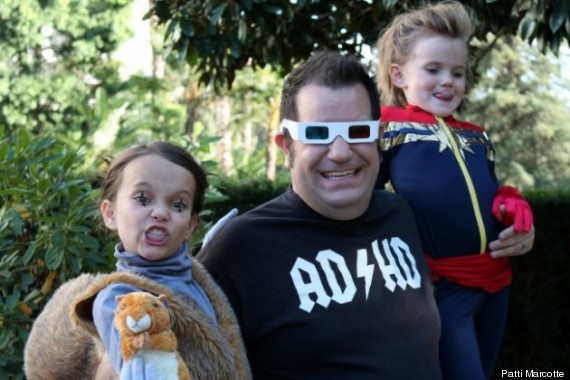 John Marcotte is the founder of <a href="http://www.heroicgirls.com/" target="_hplink">Heroic Girls</a>, an organization dedicated to empowering girls by advocating for strong role models in alternative media — particularly comics.