All day long the couples come, one after another in endless procession, in turns nervous and delighted, terrified and numb, clumsy and ecstatic, most resplendent in rumpled tuxedoes and extravagant lace, entourages in tow and usually a photographer too, all anxiously bunching together in the small, dimly lit hallway in front of the SF county clerk's office, waiting to be waived in so they can get their IDs checked, their paperwork stamped, their hearts authenticated.

Do you still want to go through with this? Yes. Yes, we most certainly do. Are you who you say you are? Yes, probably. Are you sure you're ready for this? Oh my God, I hope so.

Very well then. Let's do this thing.

They're all getting married, of course, at SF's magnificently, matrimonially perfect City Hall, an endless pageant lighting up the building from 9:30-3:30 every day of the week (reserve your slot right here), year in and year out. It's a splendid and deeply gratifying sight, really, heartwarming in all sorts of unexpected ways, a kind of surreal gift to able to bear witness like this, to visit City Hall for whatever reason and be suddenly drenched in myriad shapes and enthusiasm levels of this surreal, mystifying, electric thing called love.

Don't cringe like that. I hereby defy anyone, no matter your opinion on matrimony or public institutions, to hang out at SF's most iconic civic landmark for a single afternoon and not feel at least moderately blasted anew in the heart, in the blood, down to your skeptical and wary soul. It's mesmerizing. 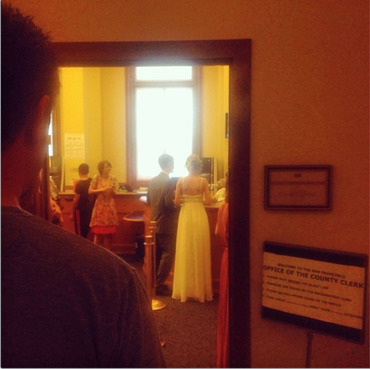 My iPhone buzzes. I'm standing there in line at the clerk's office, amongst the scattershot wedding parties, here on matters of simple civic business, really, something about renewing my S Corp's DBA and of course it's taking much, much longer than expected because, well, doesn't it always? My 20-minute errand to pay a simple fee has somehow turned into an amusing two-hour ordeal, bouncing between the clerk and the tax assessor, a pile of mysterious paperwork growing like a divine comedy in my hands.

Somehow, I don't mind so much. Love is positively swarming all over the joint on this particular sunny Friday, pulsing and alive; as if to prove my thought, just as I make it to the counter to sign another drab form, a woman three feet to my left is signing what I assume is her marriage license (permission slip? Letter of intent? Mission statement?) in front of the Justice of the Peace. Her hand is shaking and her grin's a mile wide. "Oh my God, here we go!" she says to her nearby friend. "No turning back now!" her friend replies, and they burst out laughing.

Smilingly, I look down at my phone. It's a text from a dear friend, asking what I'm doing later and if I might be free for drink, because she's having sort of a rough day. I tell here where I am and what I just witnessed and, as if cueing some perfect cosmic irony, she tells me she's on her way downtown. To meet with her mediator.

To finalize her divorce.

My phone nearly bursts. Just a moment prior, that same phone had been snapping casual shots of the hectic bridal spectacle around me, and I suddenly recall that cynical comment about how they should put the County Clerk's office right next to the Federal Office of Soul-Crushing Divorce so the lines coming into and out of each could stare nervously at one another, perspectives entangled and hearts confounded. Fun!

What to make of it all? Love's churn and variety, fireworks and cruelties? I look around City Hall and think of all my friends now hovering around their early 30s, many of whom - like most in our culture - we raised with relatively established, specific ideas of love and marriage, nearly all of whom are now hitting that point in life when all those ideas get exploded, imploded, torn asunder by the great Trickster called reality.

One by one, the beliefs crumple and concede....