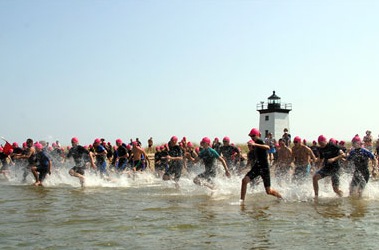 I talked with activist and artist Jay Critchley about the Silver Anniversary of the Provincetown Harbor Swim for Life and Paddler Flotilla (A Benefit for AIDS, Women's Health & the Community), which happens Saturday, Sept. 8, 2012. Since 1987 thousands of swimmers, kayakers, volunteers, and spectators have been participating in this fabulous Provincetown fundraising tradition, presented by the Provincetown Community Compact. Swimmers from across the country will swim 1.4 miles across Provincetown Harbor to benefit Helping Our Women, AIDS Support Group of Cape Cod, Outer Cape Health Services, Provincetown Rescue Squad, Lower Cape Ambulance, Academy at Provincetown Schools, Soup Kitchen of Provincetown, and the Compact Community Fund. Last year swimmers raised $200,000.

I talked with Jay about the event and issues facing our LGBT community. When asked what his personal commitment is to LGBT civil rights, Critchley stated:

We'll I'm an artist who's always been very out, and I'm also a father with a son and two grandchildren. That has been an experience. I'm very open and out as an artist. One of my major projects was the Old Glory Condom Corporation, which was a patriotic condom company in the '80s and '90s which made it patriotic to practice safer sex. I wanted to get a trademark for it, and the government denied it, so I had a three-year legal battle with them. They said it was immoral and scandalous to associate the flag with sex, but eventually we won. I did get a trademark. The slogan of the company was "Worn With Pride Countrywide." Basically the American flag was printed on the condom. I created the first AIDS healing performance on the beach here in Provincetown in 1983 called "Immunity Mandela." So a lot of my work has been intertwined with civil rights for people with AIDS, for the LGBT community, and the community. I bring people together. It's all about different facets of the community coming together, which is what Provincetown is all about.