When religious leaders ask millennials to make black-or-white moral judgments about sexuality, these young Americans will likely point out the gray.

Being unaffiliated with any religious tradition is the most common religious identity among this rising generation. And when it comes to sex, millennials don't always adhere to the rules of religious denominations, showing overwhelming support for the use of contraceptives, while being unwilling as a group to be labeled “pro-life” or “pro-choice.”

“Majorities of both women and men in the millennial generation believe access to contraception is critical, not just for reproductive health, but also for the financial well-being of women,” said Robert P. Jones, CEO of Public Religion Research Institute. 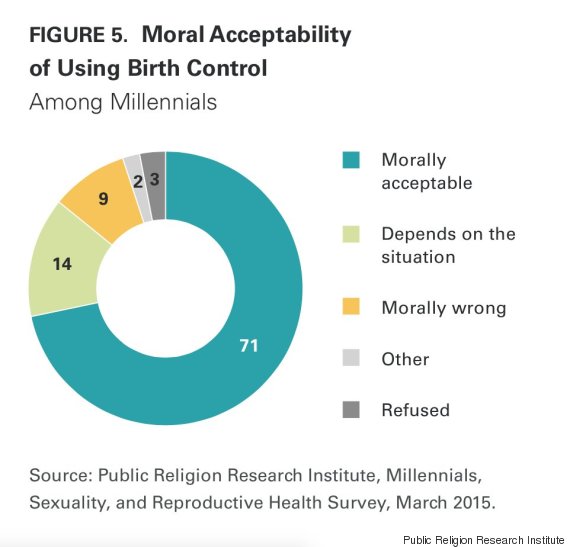 Catholic millennials’ attitudes toward the matter are particularly telling. Official church doctrine warns that artificial birth control, including everything from condoms to Depo-Provera, is “objectively immoral.” Instead of using methods that “work against the natural gift of fertility,” Catholics are instructed to practice natural family planning and “refrain from sexual union during the woman’s fertile time.”

The support for contraception makes sense. Young people are hitting puberty much earlier than in the past and getting married much later . That means most millennials will be sexually mature for more than a decade before settling down with a partner -- and religious leaders will spend much of that time asking them to quell their natural desires. 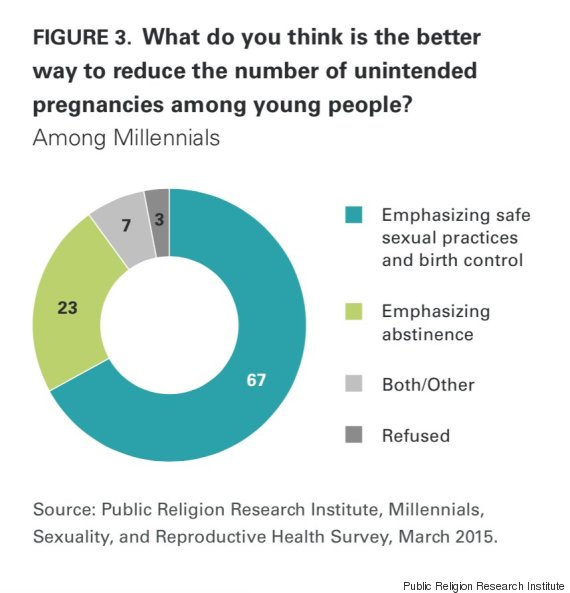 The dynamic isn't sustainable, according to Brandan Robertson, a 22-year-old Christian blogger at Revangelical.

“We need to be real about this,” Robertson told HuffPost. “We need to be taught not about prohibitions about sex, but how to be a healthy and holy person who engages in sex as a positive thing, not as a dirty thing. Because sex is a gift from God.”

In fact, about 80 percent of young evangelicals say they've had premarital sex, according to a 2012 survey from the National Association of Evangelicals. And nearly one third of this group's unplanned pregnancies end in abortion, RNS reports.

Another trend became clear in the PRRI survey: Not only are millennials having sex, they want to be smarter about it. Three-quarters want comprehensive sex education to be taught in public schools, while only 21 percent are against it. Support for sex ed cut across all racial, ethnic, and religious groups, according to the survey.

Nearly one-quarter didn't have sex ed growing up. About 67 percent said emphasizing safe sexual practices and birth control is a much better way of preventing unintended pregnancy than emphasizing abstinence.

On abortion, millennials’ attitudes tended to align closely with the attitudes of the general public. About 79 percent of the growing group of religiously unaffiliated millennials said abortion should be legal in all or most cases. Black Protestant and white mainline Protestant millennials also showed support for abortion (61 percent and 63 percent, respectively). On the other hand, the majority of Hispanic Catholics (55 percent), Hispanic Protestants (61 percent) and white evangelical Protestants (80 percent), thought abortion should be illegal in all or most cases.

At the same time, millennials appeared unwilling to categorize themselves with labels like “pro-life” or “pro-choice.” When asked whether it was morally acceptable to have an abortion, 39 percent said it depends on the particular situation. 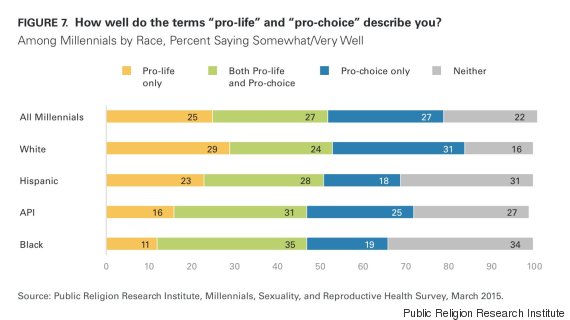 The Rev. Debra Haffner, president of the Religious Institute, a nonprofit that advocates sexual justice in religious congregations, said churches need to be more open and honest about discussing sex. Church leaders, she added, need to realize that pre-marital chastity is an unrealistic option.

“We know that many millennials stop coming to religious institutions, and for many of them it’s because of these intolerant attitudes, particularly around LGBT people, but also about being single and making healthy moral sexual decisions as a whole,” Haffner told HuffPost. “I think the church in particular needs to be more helpful to people about how to make moral ethical decisions about sex that aren’t based on the criteria of a wedding band.”

Interviews for the poll were conducted from Feb. 12 to Feb. 25. The margin of error is 2.7 percentage points.