Yeah, I'm talking about everybody's favorite Christian nationalist history revisionist David Barton. It seems this paragon of lies and propaganda has been invited to speak at the Annual National Prayer Breakfast at Fort Leonard Wood, Missouri, to be held on Thursday, May 2. The topic of Mr. Barton's presentation is to be "Our American Heritage: Why History Matters." Well, as anyone familiar with Barton's work knows, the reason that history matters to him is that it can be distorted to fit his far-right political agenda.

But, besides Mr. Barton's Christian nationalist version of American history being so inaccurate that his latest book was pulled from the shelves by Christian publisher Thomas Nelson, there are two other reasons that he is an outrageously inappropriate choice to speak at any military event. One is his very public contempt for the President of the United States. This is a man who recently posted an image on his Facebook page grouping President Obama with ... you guessed it ... Hitler! 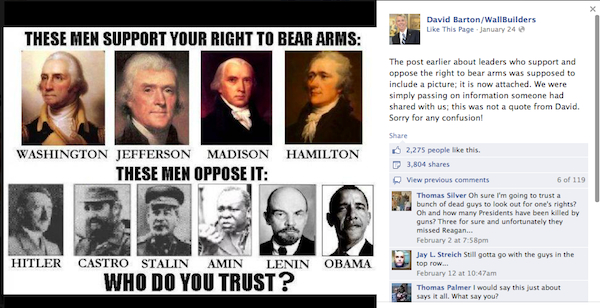 Then there's his constant denigration of faiths other than his own -- not just non-Christian faiths, but also those wishy-washy mainline and liberal Christians who are destroying the church.

The Military Religious Freedom Foundation (MRFF) has sent a letter to Secretary of Defense Chuck Hagel (full letter at end of post) demanding that Fort Leonard Wood rescind its invitation to Mr. Barton and that a more appropriate speaker be chosen for the prayer breakfast.

Mr. Barton, along with far-right Christian groups like the American Family Association, the Family Research Council, and FOX News, will no doubt be crying Christian persecution over MRFF's demand, and claiming that MRFF and its big, bad "anti-Christian extremist" leader Mikey Weinstein is out to rid the U.S. military of all religion. But nothing could be farther from the truth. These people know damn well that MRFF is not an anti-religious organization, and that 96% of our clients are actually Christians; they just need to keep lying about us to keep up the persecution stories.

Now, those of you who follow the right-wing media may have noticed an uptick lately in the number and far-fetchedness of "news" stories claiming that the U.S. military has become hostile towards Christians.

Rep. Randy Forbes (R-VA) actually told FOX News: "We are getting a lot of calls from soldiers saying 'we're afraid of going to church, we're afraid to be seen praying, we're afraid that would hurt our careers, our promotions.'" Really, Mr. Forbes? It's the Christian soldiers who are afraid to express their faith and go to church? Then, please tell us, Mr. Forbes, why the Army is having to build all those mega-churches on Army posts, like that new $30 million dollar one at Fort Hood, to accommodate so many church-going Christians? If they're afraid to go to church, as you claim, then why on earth did the taxpayers have to pay for these great big churches for them to go to?

So, have at us, oh ye persecuted Christians. Here's our letter to Secretary Hagel:

It has been brought to the attention of the Military Religious Freedom Foundation (MRFF) that the guest speaker for this year's annual Fort Leonard Wood, Missouri, National Prayer Breakfast, to be held on the National Day of Prayer, May 2, 2013, is Mr. David Barton.

For the following three reasons, Mr. Barton is an egregiously inappropriate speaker for this or any other military event:

1) his open contempt for and denigration of the President and other government officials;

2) his denigration of faith groups other than his own; and,

3) his revisionism of American history.

Article 88 of the Uniform Code of Military Justice (UCMJ) states that:

Although Mr. Barton is not himself in the military, the invitation for him to speak at this military event can be considered nothing less than the condoning and endorsement of statements that if made by the officer(s) who invited him to speak would be punishable by their court-martial.

Mr. Barton, who is above all else a political activist, is well known for his open, vocal, and constant use of contemptuous words against the President. Mr. Barton's statements are not merely political opinions, but the promoting of a number of conspiracy theories and lies about President Obama, and even equating him with Adolf Hitler.

• In an article on his WallBuilders.com website titled "America's Most Biblically-Hostile U. S. President," Mr. Barton accuses President Obama of "Acts of hostility toward people of Biblical faith" and "Acts of preferentialism for Islam." This article is updated periodically with additional unfounded accusations, with the latest accusation being added on April 17, 2013.

• He has accused the Obama administration of deliberately allowing the attack on the consulate in Benghazi, claiming that Obama allowed the attack as "the perfect set-up for the anti-blasphemy [United Nations] resolution that we joined on to and said we're going to be a part of."

• He has accused President Obama of exploiting the Sandy Hook tragedy for political purposes, saying he'd "never let a crisis go to waste."

• He has posted an image on his Facebook page grouping President Obama with Hitler, Stalin, and Castro (see Appendix A):

• As a frequent guest on Glenn Beck's former FOX News TV show, radio show, and web-based TV show, Mr. Barton has been an active part of, or complicit in, numerous lies and conspiracy theories about President Obama, such as his being a socialist, Marxist, or communist, and his being affiliated with groups such as the "Muslim Brotherhood."

Dozens, if not hundreds, of other examples could be given of Mr. Barton's past and ongoing contemptuous words against the President.

Denigration of Faith Groups Other Than His Own

Mr. Barton is also well known for his attacks against faiths other than his own, including Christians who do not subscribe to his narrow, fundamentalist interpretation of Christianity. This is the second reason that Mr. Barton is an altogether inappropriate speaker for the upcoming Prayer Breakfast at Fort Leonard Wood -- an event that is supposed to be inclusive of members of all faiths.

• Mr. Barton has regularly attacked mainline Christian denominations for their stances on both theological and political issues.

• He has regularly promoted the conspiracy theory that Muslims seek to place the United States under Sharia law.

• He has hosted virulently anti-Muslim guests on his radio show, WallBuilders LIVE!, to include guests who have been disinvited from speaking at other military events due to their attacks on the religion of Islam. For example, one recent guest on his show was anti-Muslim activist Brigitte Gabriel, who was disinvited from speaking at the Air Force Academy after statements she made at a prior appearance at the Joint Forces Staff College (i.e., saying that Americans of the Muslim faith should not be allowed to serve in the U.S. military or hold political office) were revealed.

And last, but certainly not least, Mr. Barton is best known for his revisionism of American history.

• The politically motivated and deliberate historical falsehoods presented by Mr. Barton in his books and presentations have been well documented by both liberal and conservative historians.

• His latest book, The Jefferson Lies, was pulled by Christian publisher Thomas Nelson due to its historical inaccuracy.

The title of the presentation that Mr. Barton is scheduled to deliver on May 2 at Fort Leonard Wood's prayer breakfast is "Our American Heritage: Why History Matters," indicating that his presentation will be one of his propagandist Christian nationalist history lectures.

Given that Mr. Barton has a standard history presentation that has remained virtually unchanged for many years, the content of the presentation he intends to deliver at Fort Leonard Wood can be anticipated. It will undoubtedly contain numerous misquotes and lies about America's founding, all of which have been proven to be untrue, and a grossly distorted view of the Constitution that our men and women in uniform who will be attending this prayer breakfast have sworn an oath to support and defend.

For the three reasons listed and detailed above, the Military Religious Freedom Foundation demands that the invitation to Mr. Barton to speak at the Fort Leonard Wood prayer breakfast on May 2, 2013 be immediately rescinded and a more appropriate and inclusive speaker be chosen for this event.

John McHugh, Secretary of the Army

General Raymond T. Odierno, Chief of Staff of the Army