On one level, foursquare is a service on your phone that allows you to notify your friends where you are -- especially useful if you're on a night out in the city and you're looking for where the next party is. On another level it is also city guide and a social game and on another it could even be considered a loyalty store card with discounts and offers.

When we met with co-founder Dennis Crowley in the office space he shares with a couple of other New York start ups, he admitted that even though thousands of people were already using the service they had only built 20% of what the team thinks foursquare will grow up to be.

"After we announced the service at SXSW and then at the PSFK Conference in New York we started to concentrate our work on the API rather than trying to make the service perfect. We wanted to let other developers use the service as a platform to develop their own services." 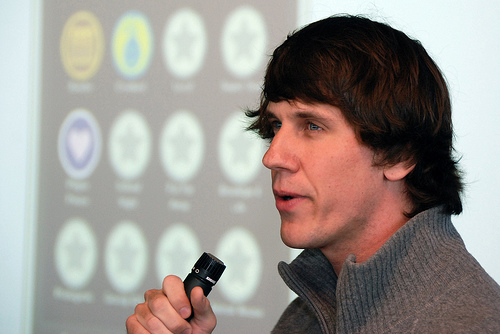 At first a community of outside developers used the API to actually help the company -- they built a version of the application that works on the iPhone to work on phones powered by Google Android operating system. We asked Crowley why people would help them develop their for-profit company. Crowley argued that it was the transparency they offered that helped: three guys who needed help with some of their development to keep it up to speed with user expectation.

The API has already been used for some other services. SocialGreat uses opt-in data from users of foursquare to offer a real time barometer of what was hot in terms of bars and restaurants in cities.

Crowley is looking forward to seeing what other people do with the service. Referencing a theory put forward by Clay Shirky, Crowley says that at some point the users will take over and build something that he hadn't set out to create. Crowley is already bemused by how often people are checking in to locations.

"I understand why someone wants to check in at a bar on a Friday night to notify their friends of their location -- but what motivates someone to check-in at a Home Depot or a Target?"

Could this be some some evolution in identity creation? Crowley said that was possible but he was keen to devote his time to the service they offered.

"Our job is to make every check in rewarding. We want to help you find user generated recommendations to help you know what to order, what the specials are and where to go next," Crowley added. The service currently let's users tag locations with information so that others can find out what their friends think of it. The service is full of users' suggestions of what item of a menu to get in a certain restaurant or what cocktail to get at a certain bar.

A popular aspect of the service is the personal statistics report and table where you can compare your score with others. Crowley says that foursquare is trying to offer pieces of data-candy that make the user play and interact with each other and their surroundings like they never did before.

"We want to encourage people to do new things. We want to give them the mechanics like Nike + did for running," he says. "Our internal tag line when we started as that foursquare was to make cities easier to use."

Being easier to use is not just about position -- it is also about time. Crowley argues that a location based service needs to evolve to understand a user contextually -- to tap into your calendar, for example, and understand if you have a hole in your schedule, what time of day it is on what day of the week and what your habits are.

To read more, go to PSFK