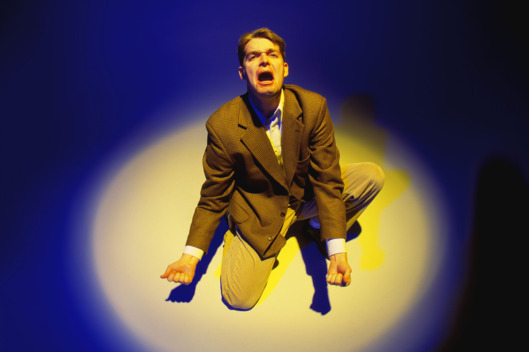 Years ago, in a left-behind version of his professional life, psychologist Scott Frankowski worked in an office. Seated next to him in this office was a particularly memorable colleague, who was perfectly nice, but who each day seemed to have some new, huge personal problem to share. "She was really cool, and fun to chat with, but I was like, How is your life just this cycle of crisis?" recalls Frankowski, now a researcher at the University of Texas at El Paso. "It was minor stuff, but it was just taken to a whole other level. 'Oh my gosh, my kid is sick.' Or 'I'm leaving work early.' I was just like, 'Really?' How is this always happening?'"

Related: So Apparently There Are 4 Kinds of Introversion

More recently, he remembered his former co-worker while musing over the "It's complicated" relationship status on Facebook. "Who would post that? It just says so much," he said. "To be in a complicated relationship is one thing. But then to go in and make that public -- again, it just takes it to a whole new level." Who are these people, he wondered, who seem to sincerely believe that their lives are laden with gigantic problems, no matter how small the problems actually are? He had a hunch, he told Science of Us, that there must be "some underlying trait to this -- something that is driving people to have lives filled with chaos."

Introducing Frankowski's attempt to pin down this trait: the "need for drama" scale, which he and his University of Texas at El Paso colleagues recently developed, publishing their findings earlier this year in the journal Personality and Individual Differences. In psychology, a scale is essentially a high-brow BuzzFeed quiz; it's an evidence-based survey intended to measure, for example, a particular personality trait. Frankowski and his team argue that their drama scale fills a gap in the existing scientific literature by identifying a trait that is not quite pathological -- it's not so serious, for instance, as histrionic personality disorder or borderline personality disorder. And yet it is still definitely A Thing. "I think, probably, most people know someone like this in their life," he said.

Interestingly, the researchers' analysis -- which in total included answers from nearly 500 study volunteers -- showed a correlation between a high score on the drama scale and a high score on a compilation of traits that indicate impulsiveness. And so you might say a highly dramatic person lacks a filter; he or she is not shy about sharing opinions, and tends to blurt out thoughts. This is the person, for example, who regularly updates their social-media feeds with the cringe-worthy details of their ongoing breakup, or who says whatever is on their mind regardless of the audience. So this suggests that their natural tendency to speak (and act) without thinking could be one characteristic that leads dramatic people to dive headfirst into dramatic situations: Their impulsivity helps to create the drama they crave.

Related: Here Is a Really Easy Way to Identify a Narcissist

Additionally, highly dramatic people tend to have an external, rather than an internal, "locus of control"; in other words, though their own behavior may be responsible for creating much of the dramatic happenings in their lives, they don't see it this way. "High NFD individuals seem to see the world as happening to them," Frankowski and his colleagues write, "which likely makes them reactive to perceived slights." Put another way, those with a naturally dramatic flair tend to perceive themselves as the victim of their circumstances. All of this drama feels out of their control -- what else is there to do, then, but complain about it, to anyone who will listen?

The researchers see their work as being potentially helpful for organizational psychologists, specifically those who study interpersonal relationships in the workplace. It could also be useful for scientists (and the rest of us) who are trying to understand what makes people post their every problem on Facebook, Twitter, and the like. As the psychologist Scott Barry Kaufman recently noted, the researchers differentiated the need-for-drama trait from existing personality disorders, including borderline personality disorder and histrionic personality disorder. In a way, this newly defined trait is like a dialed-down, non-clinical version of those disorders -- for example, people with both BPD and HPD tend to be at risk for self-harming, but people with a high need for drama do not.

As it's often colloquially used, "being dramatic" is something of a gendered term; consider a 2009 study, for example, in which people told researchers that men who were experiencing anger or sadness were just "having a bad day" -- their emotions were situational, in other words. Women who were sad or angry, on the other hand, were considered "emotional." But if there is one takeaway message Frankowski would like to leave the reader with, it's this: Their analysis identified no gender differences here. In other words, men and women were equally likely to exhibit an apparent need for drama. "Clinicians have always labeled women with these traits but my thought was I know a lot of men who are also exhibit these very dramatic personality traits," he said. There can be drama queens, sure, but there are, in all likelihood, an equal number of drama kings.

This Is the Best Advice on Motivation I Have Ever Read This Video Game Could One Day Be Used to Treat Social Anxiety Do You Suffer From Impostor Syndrome? Take This Test to Find Out If You Can't Have the Job You Love, Love the Job You Have The Psychological Cost of Boring Buildings

More:
science of usdramanymag.comhealthy livingpersonality
Newsletter Sign Up
The essential guide to taking care of your mind and body
Subscribe to HuffPost’s wellness email
Successfully Subscribed!
Wellness delivered to your inbox