It's estimated that we spend nearly 50 percent of our waking lives in a state of daydreaming.

For something we do so often, mind-wandering sure has a bad reputation. It's often described as a mindless activity -- one that makes us more lazy, unproductive and dissatisfied with our lives. A Harvard study even concluded, "A wandering mind is an unhappy mind."

But why would we so readily spend half of our lives engaged in a fundamentally purposeless activity? The answer is that we don't -- a wealth of new research in psychology and neuroscience suggests that daydreaming is anything but purposeless.

In fact, these self-generated thoughts might make us more creative and productive, and may even bring meaning to our lives.

"We (and others) have been arguing that daydreaming serves a function -- evolution would have not let so much metabolic energy go to waste," Dr. Moshe Bar, cognitive neuroscientist and author of a new, surprising study on the subject, told The Huffington Post. "It helps us prepare for the future, plan, think about self and others, and generally engage in mental simulations that facilitate our interaction with the environment."

But in addition to staving off boredom and giving us the opportunity to reflect, Bar's research suggests that daydreaming might make us more productive at the task at hand -- even as it offers us an opportunity to allow our minds to run wild.

Bar and his colleagues were able, for the first time, to induce mind-wandering in study participants. They used low-level electrical currents to stimulate one of two brain regions: the frontal lobe, which deals with executive control, and the occipital cortex, which is associated with visual processing. While hooked up to the stimulation tool, participants performed a purposefully boring computer exercise. Periodically, the participants were interrupted and asked to describe to what extent they were experiencing wandering thoughts (known in psychology as "task-unrelated thoughts," or TUTs). 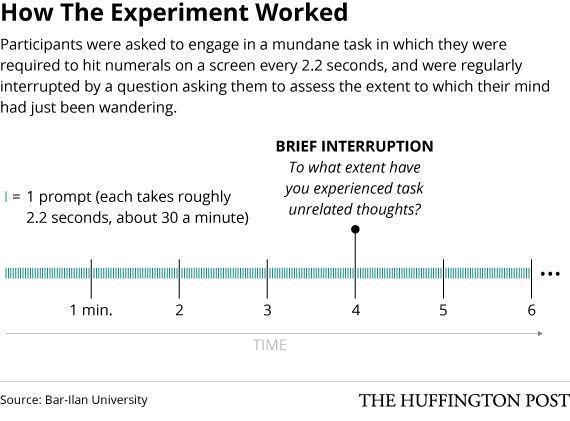 Participants reported daydreaming most when stimulation was focused on the frontal lobe of the brain. While daydreaming and control might seem antithetical -- mind-wandering seems to involve a lack of attention, while executive function plays a role in regulating attention -- the researchers hypothesized that there might be a connection between the two. Both brain regions are involved in organizing and planning for the future, for example.

"Our results... demonstrate that the frontal lobes play a causal role in the production of mind-wandering behavior," Bar said in a statement.

Bar suggested that this improvement is due to the fact that mind-wandering combines the thought-controlling activity of the executive network, and the thought-freeing activity of spontaneous daydreaming, which occurs across the brain's broad default mode network. The activation of multiple brain regions during mind-wandering, Bar says, "may... contribute to the ability to stay successfully on-task while the mind goes off on its merry mental way."

"Attention and mind-wandering need not be at odds with each other."

"What I think is cool about this study is that it’s possible that the stimulation simultaneously increased activation of working memory (allowing for greater focused attention) and increased mind-wandering," psychologist Scott Barry Kaufman, who specializes in daydreaming and creativity but was not involved in this study, told The Huffington Post. "If true, this would suggest that attention and mind-wandering need not be at odds with each other and can even facilitate each other."

As Kaufman suggested, the study points to a harmony between mind-wandering and mindful mental states, which we tend to think of as being at odds with each other. In fact, mind-wandering may not be defined by the inability to pay attention so much as the ability to draw attention inward --- to our own thoughts, reflections and dreams.

Want to know more about what happens when the mind wanders? For a succinct explanation of what's happening in your brain when you're daydreaming, and how engaging in a little mind-wandering can lead to enhanced creativity and a positive mood, check out this great video from AOL Originals:

The findings were published in the Proceedings of the National Academy of Sciences.