CHARLOTTE, N.C. — It's a bird … It's a plane … It's a plane-size bird! If humans had lived 67 million years ago in what is now Texas, they would've had a hard time missing the giant flying pterosaur called Quetzalcoatlus, which was the size of an F-16 fighter jet. The biggest animal ever to fly in the history of the world, this pterosaur dominated the sky with its 34-foot (10 meters) wingspan.

Fossils of the creature have been found in Big Bend National Park, in an area that was heavily forested in the late Cretaceous. But this presents a puzzle: How did it fly? The region lacked the cliffs that make flight for such large birds easy to conceive.

A new computer simulation has the answer: These beasts used downward-sloping areas, at the edges of lakes and river valleys, as prehistoric runways to gather enough speed and power to take off, according to a study presented Wednesday (Nov. 7) here at the annual meeting of the Geological Society of America.

First the animal would start running on all fours, Texas Tech University scientist Sankar Chatterjee, a co-author of the study, told LiveScience. Then it would shift to its back legs, unfurl its wings and begin flapping. Once it generated enough power and speed, it finally would hop and take to the air, said Chatterjee, who along with his colleagues created a video simulation of this pterosaur taking flight. 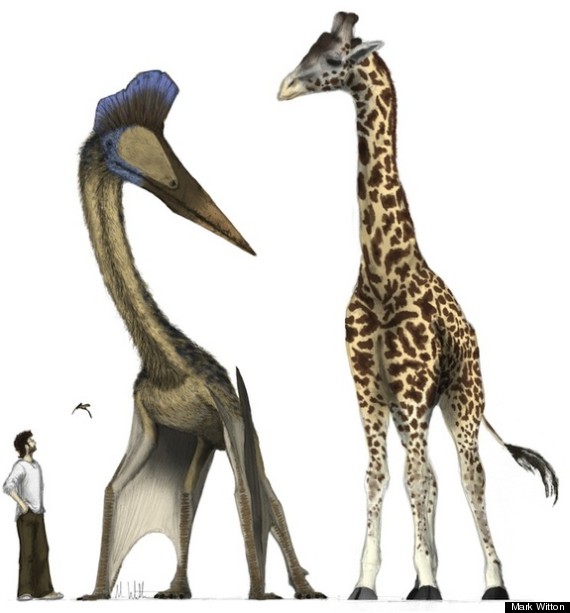 Pterosaurs ranged in size from Quetzalcoatlus, which was as tall as a giraffe, to Anurognathus, an insect-eater the size of a small bird seen to the left of Quetzalcoatlus.

"This would be very awkward-looking," he said. "They'd have to run but also need a downslope, a technique used today by hang gliders. Once in the air, though, they were magnificent gliders."

Chatterjee's past research revealed the likely flight trick of another hefty prehistoric aviator, Argentavis magnificens: It relied on updrafts to help lift it into the air.

Chatterjee said the flight and landing of Quetzalcoatlus probably looked like that of an albatross or the Kori bustard, the heaviest modern-day bird capable of flight.[Avian Ancestors: Dinosaurs That Learned to Fly]

The pterosaur likely weighed about 155 pounds (70 kilograms), which is near the maximum that an animal could weigh and still fly, he said. Other scientists have estimated it weighed more, but from a biophysical perspective, that would be simply impossible, he said.

Landing was an ordeal for this creature, involving a lot of flapping, followed by a touchdown with the hind legs, leading to a four-legged run.

Quetzalcoatlus had very light, air-filled bones — which were strong for their weight — but its wings were relatively fragile. "It was a marvel of engineering," he said.

These pterosaurs likely fed on fish or scavenged dead animals, like modern-day buzzards. When standing, they were about as tall as modern-day giraffes, Chatterjee said. They were named after Quetzalcoatl, the Mesoamerican feathered serpent god.