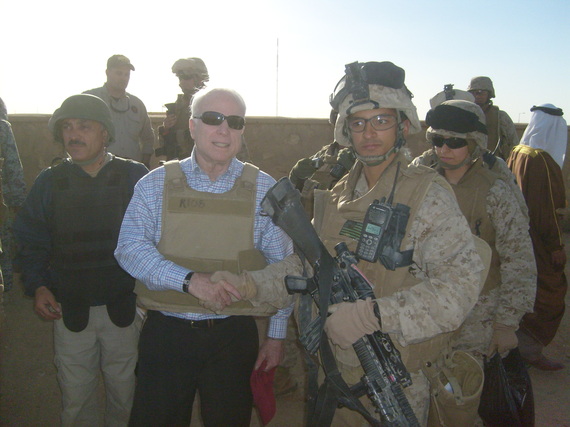 "We are on the cusp of a wave of PTSD," says Dr. Sandro Galea after presenting a 300-page Congress-sanctioned report earlier this year suggesting the Pentagon and VA are unprepared for the impending wave of post traumatic stress disorder among troops.

Indeed, nobody is immune to trauma -- roughly half of the U.S. population will experience at least one significant traumatic experience in life. Whether it's physical or sexual assault, witnessing death, or natural disasters, that pain can develop into post-traumatic stress disorder (PTSD).

As Galea noted, the frequent and rising cases among those serving the nation is alarming. In a revealing conversation, Akshay Nanavati, a marine corps veteran who served six years and was deployed to Haditha, Iraq from 2007-2008, opens up and shares his struggles with PTSD and how he worked to overcome them.

The Guilt of Not Dying

For anyone going to war, death in the midst of battle is the ultimate sacrifice and the ultimate mark of respect. Many returning from war carry the guilt and shame of being alive -- as baffling as that sounds. Death carries an inadvertent honor that subconsciously plagues the lives of survivors.

Having struggled for years, Akshay eventually overcame the guilt through embracing it. The sense of not having done enough was used as fuel for creating a future that would cease to beg the question.

Poignantly reflecting on the death of a close comrade, he says, "If I am still alive today and Corporal Jacob Neal is not, then I will earn this life by doing something worthwhile."

Using cognitive reappraisal to reframe negativity -- rather than seeing guilt in a disempowering way, Akshay chose to see it in an empowering way.

The Absence of Structure and Meaning

Military life is extremely regimented, disciplined, and structured. It provides not only the physical routines for daily life, but also deeper existential structures that many search for -- purpose, meaning, and identity. Engaging in war meant taking a stance against the violation of values, you represented a nation, it's people, and their philosophy of freedom. Returning from war and back to the "normal" world was beyond a culture shock, it was an existential soul-shaking shock.

The National Council on Alcoholism and Drug Dependance (NCADD) notes alcohol and drug abuse among veterans as a significant health issue -- the unhealthy response to the shock. Absent of daily structure, Akshay plunged into alcoholism but later sought after ways to recreate regiments for his daily life and also breaking down monthly goals. Discipline and habit formation is monumental in military service, as it is foundational in a healthy human experience.

In the military, you inherit a meaning, identity, and purpose -- but what is inherited can also be recreated. Akshay filled that emptiness of a grand meaning and purpose for life through putting together a non-profit organization, the Fearavana Foundation, helping others with post-traumatic recovery and growth. His fundraising efforts include attempting to run across every country on the planet.

Our fight/flight mechanisms were never meant to run continuously; war is an overstimulating experience for the senses, and those caught in the fog are exposed to stress at consistent and unhealthy levels.

The constant high alert creates challenges when returning to "normal" life -- the environment may have changed, but the physiology hasn't. Akshay would jump at noises many of us simply ignore, and struggled around large crowds.

Ingrained neural pathways from a previous experience need to be weakened in order to properly readjust to a new. Along with cultivating a mental awareness that one is no longer in a war zone, breathing practices and meditation alleviate the body's false stress response. Visualization techniques leverages the brain's struggle to tell the difference between imagination and reality; along with meditation, Akshay would imagine being surrounded and protected by a ball of white light whenever the environment would trigger off his anxiety.

Learning to reconnect with people

Being literally confronted with death is an experience not many go through. The crippling angst of Monday-itis could not be more fickle in comparison to being caught in the midst of gunfire.

The canyon between "war life" and "civilian life" creates problems for reconnecting with family and friends. Akshay found himself dismissing his wife's legitimate struggles, constantly comparing them to those suffering in war or genocide. He found himself highly judgmental, unable to empathize, and treating other's concerns as trite.

He realized we all have our own context for understanding pain, and that nobody's experiences should be ridiculed or patronized. While "war life" and "civilian life" could not be farther apart on the spectrum, our internal emotional and psychological compasses are the same. Realizing that, allowed Akshay to open up the door for compassion and empathy.

Have a story about PTSD or other mental illness that you'd like to share? Email strongertogether@huffingtonpost.com, or give us a call at (860) 348-3376, and you can record your story in your own words. Please be sure to include your name and phone number.