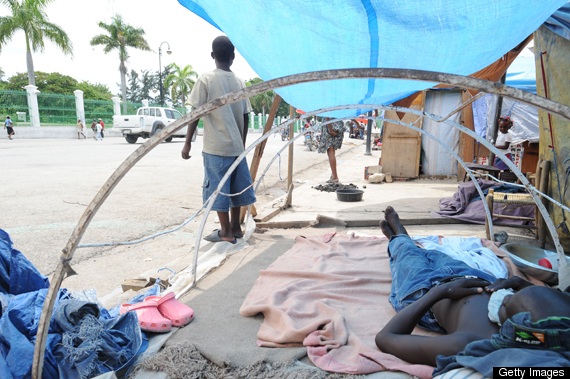 In the four months since the Haitian earthquake, psychologists from around the world have been traveling to the island, hoping to help a population in shock and at risk for post-traumatic stress disorder. Many are veterans of crises such as Hurricane Katrina, and have extensive experience responding to disasters.

But Dr. Guerda Nicolas, a Haitian-born researcher who has conducted landmark studies examining how Haitians experience depression and cope with disasters, has a simple message for U.S. mental health workers thinking of making a relief trip: "Please stay away - unless you've really, really done the homework."

As a leading authority on Haitian mental health, Nicolas fields about 6 to 8 calls weekly from relief organizations, missionary groups, and others with disaster counseling skills - and has to inform those who call that psychological conditions often present differently in Haitians. Her research has established that the usual North American approaches to treating and diagnosing depression and PTSD simply won't work for many Haitian patients - and could actually be harmful.

"Psychological issues don't transcend around the globe," she said recently as she sat in her office at the University of Miami, where she is chair of education and psychological studies at the School of Education. "People fail to recognize that it's not going to work the way you think it's going to work, it's not just an issue of being trained as a psychologist."

Standard PTSD treatment in the U.S. often involves therapies in which people recreate the memory of a traumatic event in steps or reorganize how they think about a past event, in order to help them learn ways to relax and cope. Nicolas has found that for many Haitians, singing, dancing, and receiving comfort from their minister is far more effective than these methods. "Things like dancing and praying are not a part of my psychological training, but are necessary to have the outcome you want to have," she said. "The kind of treatment model developed for PTSD doesn't integrate folk medicine, it doesn't take into account cultural aspects, and it makes the assumption that people have the wherewithal to avoid traumatic events."

Additionally, many western psychological concepts don't translate into Haitian Creole, and standard psychiatric assessments have not been tested among Haitian patients. In her past work, Nicolas has documented numerous cases of Haitian immigrant women who were experiencing severe depression but did not meet the standard U.S. criteria for the condition, which requires a person demonstrate significant distress or impaired functioning and includes symptoms such as weight changes, sleeping problems, and problems concentrating. "You can have a Haitian who is very, very depressed and they get up in the morning, they take care of their kids, they still get dressed, they go to work," she said. "But they still have this sense of emptiness that they cannot describe."

"It's not that we don't appreciate all the help we can get," she said recently, after returning from a trip to Port-au-Prince. "But this roll-over every week doesn't work, never mind the cultural barriers and the language. Therapy is a very difficult thing to do through an interpreter, especially if it's not an accepted thing in the culture to begin with."

Nicolas described the case of a Haitian woman whose child had died and who had lost her home in the earthquake, but who was most upset about losing her leg in the rubble. A visiting American psychologist believed that the woman was avoiding discussing what was bothering her most, and persistently tried to get her to talk instead about her child's death - making the job of the Haitian psychologists following up with her more difficult.

"For that woman, losing her leg was more traumatic, there's a sense of fragmentation which is hard for a person from another culture to understand," she said. "What that sets up for (the Haitian psychologist) now is, how do I rebuild this relationship again so that this woman can see that we're not all the same."

Nicolas is now working with Haitian psychologists to train aid workers to recognize signs of depression and PTSD in Haitians so that they can discern which earthquake survivors need immediate therapy and which can wait. She is also working with teachers and adoptive parents to understand the mental health needs of Haitian orphans, many of whom may mask their trauma behind a smiling, seemingly happy appearance.

"People may be interpreting these kids as doing well, when in fact they're not," she said. "We're trying to create programs that are sustainable, so it's not like we go in, do our thing for four weeks, feel good about ourselves and then leave. It's about creating an infrastructure above and beyond that."