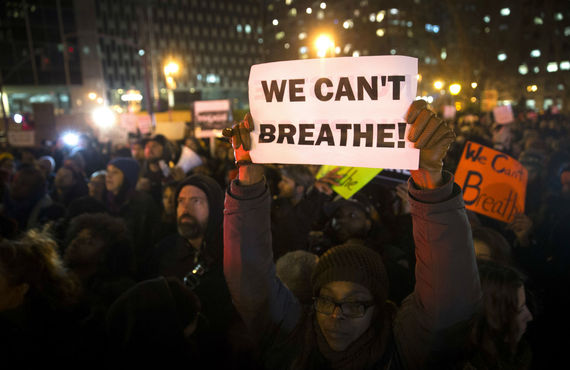 PTSD. If you're like most people, the four-letter acronym--meaning Post-Traumatic Stress Disorder--conjures up images of military vets home from war always on edge, jumping at sudden noises, awakening in darkness in cold sweat. Or maybe even "the American Sniper," back home, unable to sleep or focus, longing to return to war, or the former marine who kills him at a Texas shooting range.

I have never served in the Army or Air Force or Marines, but I suffer from PTSD.

Heart races, sense of terror, impending doom takes hold. Sometimes I feel a loss of control, sweat secretes on cue, flashbacks of exchanges with police like disparate clips. Sirens like gunshots. Whites of eyes holding a nation's white imagination. Now, it's usually this one evening with the LAPD in the spring of 2015. I'm pulled over by a racist cop for driving under the influence (while sober), bullied by three or four cars of police officers, searched over and over, handcuffed, and arrested.

And yet. It's more than my own memories. More than Sandra Bland, who's still alive then, not yet aware she'll soon be hanged in a Texas prison, her face the new Kendra James, Rekia Boyd, poster child for post-race strange fruit, Black women's dispensability. They used to put us on postcards. More than the metal nooses cuffed around my wrists, sirens and snide comments playing in my ear on heavy rotation. More than never feeling free. It's the daily stories of unarmed Black girls and boys, women and men gunned down by white cops like wild game, unlawfully arrested, found dead behind bars. It's the videos that go viral of young Black men being choked to death on cement, shot with hands in the air. It's the little Black girls being thrown and body-slammed in their classrooms, tackled and dragged by their hair while outside in bikinis.

I once read that nearly a fifth of all active duty cops suffer from PTSD, the leading cause of police death. I also read that one-third of children living in urban neighborhoods throughout the U.S. have PTSD--nearly twice the rate reported for troops returning from war zones in Iraq. According to more recent research and the country's top child trauma experts, most of these children are exposed to recurrent trauma: community violence, murder, assault, a separate and unequal way of life that leaves them prone to structural violence, living in chronically unsafe or hostile environments. And like the forming of a sedimentary rock, layer after layer gradually building up over time, the trauma accumulates in the mind and develops into PTSD--sadly nicknamed "Hood Disease." America's urban youth are not considered children but "survivors of urban warfare."

PTSD, according to Dr. Monnica T. Williams, a clinical psychologist and associate director of the University of Louisville's Center for Mental Health Disparities, impacts more than 9 percent of all African-Americans. In a 2013 Psychology Today article, Williams writes: "One major factor in understanding PTSD in ethnoracial minorities is the impact of racism on emotional and psychological well-being. Racism continues to be a daily part of American culture, and racial barriers have an overwhelming impact on the oppressed." Not only does racism result in unwarranted arrests, death, and discrimination, it perpetuates our anxieties, leads us to be constantly vigilant--exhibiting "cultural paranoia"--puts us at an elevated risk for chronic illnesses like diabetes, obesity, high blood pressure, and cardiovascular heart disease, our babies more likely to succumb to infant mortality because of the daily stresses of Black mothers, leaves us always sick, always tired, always sick of being sick and tired.

We are living--and slowly dying--in the words of Claudia Rankine, "because white men can't/police their imagination." We are fighting daily what has come to be known as "racial battle fatigue." Like army vets without combat gear or benefits, constant trauma causes our body's fight-or-flight system to turn on and never shut off since, according to PsychCentral, "exposure to racial discrimination is analogous to the constant pressure soldiers face on the battlefield." In other words, it doesn't take going to Iran or Afghanistan to experience severe trauma or life-threatening events. Our own streets and sidewalks are battlegrounds, but unlike war vets, many of us never get to leave.