The heart of California's Coastal Act is its requirement that development not interfere with the public's right to access the beach. Yet, this right is increasing at risk as private landowners seek to shore up their own properties by building seawalls, revetments, and other structures on top of publicly owned beaches. The result is a loss of beach access statewide that will only get worse as sea levels are predicted to rise. A case in point is Broad Beach in Malibu.

The development at Broad Beach has been in a precarious situation since it was built in the late 1970s. The beach has been eroding significantly over the past 40 years, and properties face an entirely predictable risk from being built too close to the sea. Area property owners seeking to protect their investment have armored the beach in an effort to slow or prevent natural erosion. The consequence has been consistent with the science of beach armoring; any time hard structures are placed on a beach, erosion in front of the structure worsens. Or as Coastal Commissioner Shallenburger recently said, "seawalls kill beaches." 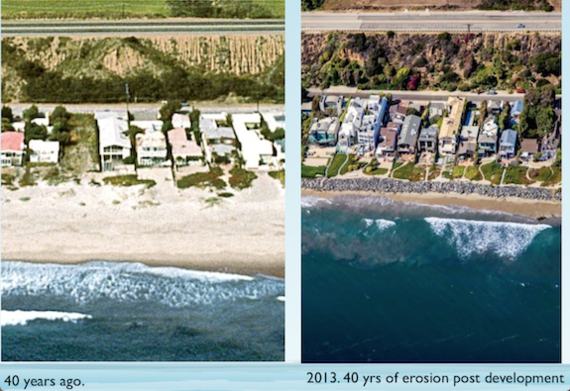 The Broad Beach development has a long history of impacting public beach access. In 2003, homeowners hired security guards to wrongfully shoo the public off the beach. In 2005 homeowners illegally bulldozed public sand toward their properties believing it would help with erosion, when in fact, it accelerated erosion. A few years later, area property owners placed unpermitted sandbags directly on public trust lands once again impeding beach access. After a large storm in 2010, Broad Beach homeowners constructed a 4,000 linear foot rock revetment to "protect" development from surging seas.

The revetment is three acres in area, and two of those acres were constructed on public trust lands (i.e. the public beach). Placement of the revetment has since exacerbated erosion to the point where much of the time there is literally no beach left for the public to access. As Coastal Commission Staff reported: "The existing revetment has been blocking lateral public access in front of the revetment for almost five years at high and even mid-range tides."

At the October 2015 Coastal Commission hearing, Commissioners approved a new project designed to address continued erosion risks to the Broad Beach development. The approved project is far better than originally proposed in key respects. First, it safeguards an adjacent Marine Protected Area by decreasing the amount of sand to be placed on the beach and sensitive habitat (cutting it from 600,000 cubic yards to 300,000 cubic yards). Second, homeowners also agreed to move its septic systems to a combined waste treatment plant which should prevent sewage from polluting the shore. Unfortunately, the approved project does nothing to ensure continued public access as the beach continues to erode over time.

Coastal Commission Staff had recommended that if, in the future, the beach eroded within 10 feet of the revetment (on the seaward side), a pedestrian path on the landward side of the revetment should be automatically opened for the public to ensured continued access to the beach. This recommendation reflected a reasonable compromise that would have protected both private property and public beach access. However, the Broad Beach property owners refused to cooperate and the Commission ultimately backed down, approving the project with no binding guarantee of future public access to the beach.

Because we have no idea how well the rock revetment and the sand replenishment project will work, it is challenging to guarantee public access in light of large storms and rising sea levels. Commission Staff also doubts the efficacy of the revetment saying: "There is substantial uncertainty about how the Revetment will perform."

As sea levels continue to rise and storms bludgeon the coast with increasing force, the conflict between public access and protecting public property will only worsen in California. The Broad Beach community is well placed to be a leader on this issue; unfortunately they have yet to demonstrate leadership. It's time for homeowners to do what is right and codify public access by entering into a legal agreement.

The public deserves to be compensated for using public lands to protect private property.