Jesse and Dirk met two years ago in San Francisco. It was instant connection; an elective affinity. After dating for about 18 months, Dirk moved in. They now live in Boston. Their union is founded on love, respect, safety, and great passion. Their relationship mirrors many others, if it wasn't for the fact that Jesse Jackman and Dirk Caber are successful adult film actors for TitanMen. Their romance is public and largely followed by numerous fans -- and a few critics -- on social networks.

Jesse shares intimate accounts of their love life in his blog. His narratives, in the contest of sensual and sexual experiences, underline the importance of commitment, protection and authenticity.

Their relationship was recently under heavy attack by ugly beasts: bullyism and alleged censorship. 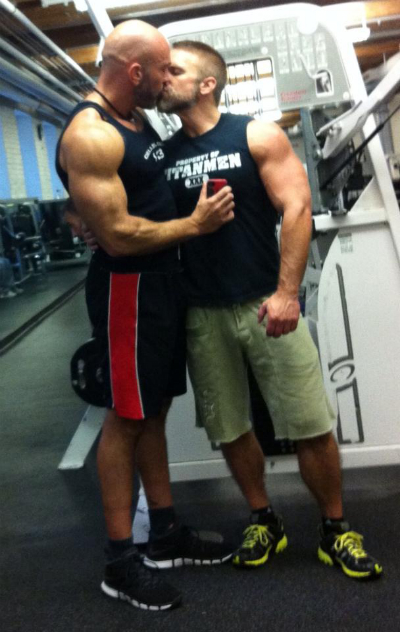 On October 7, 2013, Jesse posted on his Facebook page a sweet picture of him and Dirk. They are romantically kissing in gym clothes. The post received thousands of "likes." Hundreds of users shared the picture.

Sadly, amongst the appreciative comments, there were messages inciting violence and including name calling and death threats. According to these users Jesse and Dirk "should be shot," their "heads should be ripped off," and -- in general -- "faggots must die."

Courageously, Jesse decided to counterattack by posting another picture of him and Dirk. The caption was:

I give you this: another pic of me kissing my amazing husband. In fact, I'm making it my new profile pic. [...] Love conquers all.

The photo portrays the couple kissing on the set of a movie produced by TitanMen last year. The picture is not pornographic. The post received increasingly hate-filled reactions.

What kind of message are you trying to send? That it's OK to be gay? Sorry but it's not and it will never be so go kill yourself and stop breathing heterosexual air.

As the couple debated if and how to respond to the bullies and their emotional terrorism, Facebook-Big-Brother stepped in. Jesse received notice that their picture was removed because it violated Facebook's Community Standards. The page was blocked for 12 hours without additional explanations.

Not only did Facebook's content analysts fail to detect the harassment, they removed a picture that does not violate Community Standards. It is not the first time that the social network struggles with gay kisses.

I received multiple public death threats after posting this photo, endured countless homophobic slurs, and received dozens upon dozens of hate-filled messages, and yet Facebook did nothing about those disgusting comments, choosing to censor love instead of hate.

A Facebook spokesman reached for comments released the following statement.

As our team processes more than one million reports each week, we occasionally make a mistake. In this case, we mistakenly removed content and worked to rectify the mistake as soon as we were notified. We apologize for the inconvenience caused due to the removal of this content.

While Dirk has no reason to believe Facebook isn't acting in good faith, he remembers how it's not the first time he was subjected to censorship:

What was wrong with the picture of me and my brother at my brother's wedding?It was the two of us, fully and well dressed, both of us holding beers and smiling, his arm over my shoulder. Removed for "violating community standards".

To this day his brother purposely uses the image as his profile's cover.

Facebook restated Jesse's profile and the banned picture, yet failed to contact the couple and offer them an explanation or an apology.

For the moment, Jesse and Dirk are focusing on their personal project against cyber-bullying. Dirk said:

Resorting to name calling, argumentum ad hominem, and violence, real or threatened, are the resorts of cowards when they know they've lost the argument. We as gay men have no need to make anyone feel small just so we can feel big. We are big. We are capable of committed love, of being part of our families and creating new ones, of relating to a spiritual higher power, and of being true friends. And we are proud to show the world all of this on Facebook.

While relationships' dynamics and boundaries aren't always easy to comprehend, all unions based on genuine feelings and values need to be defended from hate and ignorant discrimination.

Jesse and Dirk stood up not only for themselves, but for all gay people, especially those who don't have resources and strength to fight back.

We should stand with them.