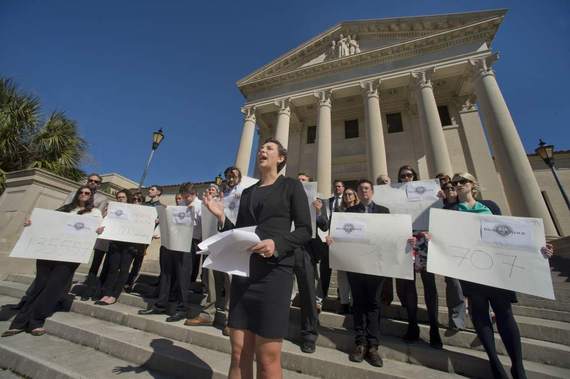 Louisiana, which has the highest incarceration rate in the country, no longer provides public defenders to all its people accused of crimes; within months over half its public defender offices are expected to become insolvent.

"It's a nightmare," according to James Dixon, the chief Louisiana Public Defender. "You have people in jail that don't have lawyers. It's that basic." In Louisiana, public defenders are appointed to represent nearly 250,000 people each year. Dixon has been warning of a constitutional crisis for years due to inadequate funding. His office has recently been sued in a federal class action by the ACLU.

The state public defender indicated that 24 of the 42 local public defender offices will become insolvent and restrict services in the next few months. Many already have broken down. Public defenders in 13 of Louisiana's 42 judicial districts are already restricting services.

For example, the Lafayette Parish public defender has laid off 35 of its 52 attorneys, and imposed salary cuts of 20 percent on those who remain. The constitutional guarantee of speedy trial is gone and death penalty cases are grinding to a halt. The remaining public defenders face caseloads of 1000 felonies a year, a rate more than five times as high as recent Texas legislature mandated caseload study which concluded that public defenders should represent no more than 175 felonies a year.

New Orleans public defenders have been refusing to represent the most serious cases since January. The highly respected Marshall Project reports their budget has been cut from $9.5 million to $6 million in the past four years. That office, which represents 85 percent of those charged in criminal court, has already laid off lawyers, and cannot replace the many lawyers who have resigned because of a hiring freeze. The office handles 10,000 misdemeanors and 8,000 felonies a year. One public defender wrote in the Washington Post that brand new lawyers have to handle cases with life sentences, carry double the number of cases that the American Bar Association recommends, do not have the time to even see their clients and are forced to plead people out to felony convictions on the day they meet them.

In an oped in the New York Times, the head of the Orleans Public Defender explained that Louisiana funds two-thirds of its public defender system with fines and fees from people convicted of traffic offenses and crimes.

Cardozo Law Professor Ellen Yaroshefsky told a New Orleans court that the New Orleans public defender's office was being run in an unethical manner. "I'm very troubled by the situation this public defender's office is in," Yaroshefsky testified. "To call this a 'justice system' is really a misnomer. ... I believe this entire office is operating as a conflict of interest. The lawyers here are compromising some clients in other to represent others. They make a decision to triage, and triage is a conflict of interest. This is a problem now that is a judicial problem, and I believe needs to be dealt with on that level."

Meanwhile, Louisiana is facing a huge overall budget deficit of nearly a billion this year and double that next year due to fiscal problems left by departing Governor Bobby Jindal.

The meltdown of the Louisiana public defender system makes it criminal to call it a justice system.