Music is an entertainment slash art form that doesn't suffer B.S. well. Sure you can sing songs about benign subjects like having a crush or wanting a Benz but try and sing a song about how the Koch Brothers need more tax breaks or how teacher's unions are overpaid and it's going to sound really, really F'd up. But other than Green Day we haven't had a lot of protest music over the past few decades. Sure Rage Against the Machine was amazing and Neil Young had his say about Bush, but I'm always amazed how even small local bands stay away from the fact that our country is being ripped off, polarized and lied to by huge corporations that don't pay taxes and weirdo billionaires who inherited all their money.

I can't exactly say why there's not much protest music to speak off. And I know there are acts out there still putting a message in their music. Maybe it's Clear Channel's ownership of so many radio stations. Or maybe it's iTunes and Apple being a company that makes most of their stuff in China. Or maybe it's because the outrage is just starting to really spark in the Midwest with all those insane Governors attacking the middle and lower classes.

I asked this question enough that finally some musician friends of mine in Austin, Texas (the home of music as far as I'm concerned) called my bluff and said, "If you write the lyrics we'll record the songs." So we did. The band is called English Teeth (Kevin Hoetger, Kevin McKinney, and Kyle Crusham). They smoke live if you haven't seen them. We recorded for four days in Austin and it was a blast. And just like that we were ready to release our EP of protest music.

This is the site which launches today.

The songs are completely free. No strings attached. But more importantly we want your songs and raps. We also want you to take one of our songs on this site and re-record it, re-write it, mash it up, hack it to bits, tear it apart, then put it back together again. Click the button to submit and we'll post them. The songs can be about anything: local issues, national, international, whatever. We don't care. We just want music about what's going on. If you're in a band and you cover one of our songs, send it to us. If you play a cover of "Which Side Are you On Boy?" we'll post that too.

We want to support the songs that will be played at rallies, punk or folk shows, rap concerts and on iPods for the next ten years. We want the God Save the Queen or the Maggie's Farm of our times. We know it's out there. 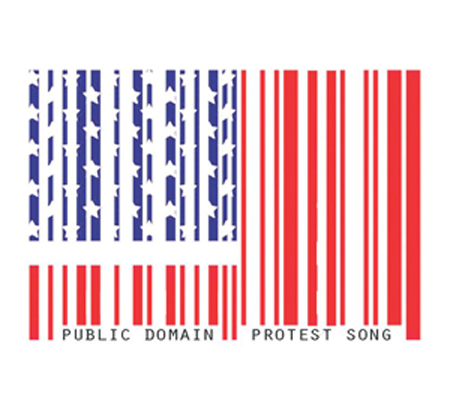 And once again: it's all free. Anyone posting music is posting it cause they believe it needs to be heard. Not to make residuals. And we mean no offense to those recording music for money. We get it. You gotta pay the bills. This is different. We want to create a scene outside the corporate radio stations and corporate music outlets.

So please forward this site and play this music. And Public Domain Protest Song will be scheduling shows in Los Angeles and Austin with guest musicians that will hopefully lead to more shows. We'll also be releasing videos and of course more music from English Teeth and myself as well as from some other bigger name artists who are already interested.