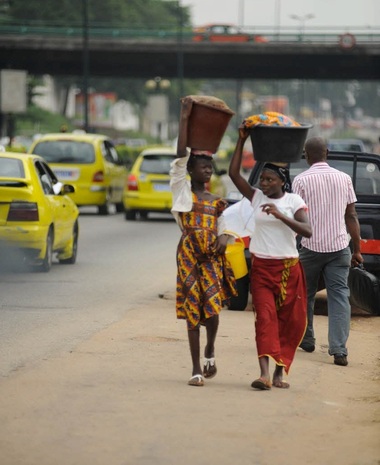 Healthy workers are generally more productive than unhealthy ones, so it follows that healthy populations are more likely to support economic growth.

The evidence for this is strong. In 2001, the Commission on Macroeconomics and Health showed that not only is higher income associated with better health but also that improved health and nutrition are linked to economic growth. A 10% increase in life expectancy is associated with economic growth increases of 0.3-0.4% per year. Between 2000 and 2011, almost one quarter of full income growth in low- and middle-income countries resulted from improved health outcomes overall.

Not such a thing as a free-ride in climate change

These economic findings are an important counter to the classic "free-rider" dilemma in the climate change debate -- that while the costs of reducing emissions are borne by just a few countries the benefits are global, so there is little incentive for some countries to act. They can effectively take a free ride, or so the argument goes. However, this is turned on its head, and local action against climate change made much more attractive, when health gains from measures to address climate change are factored in, because the benefits for countries are local, immediate, large and valuable -- both economically and politically.

Health as an economic asset was a central concept in a recent study by climate change researchers at the International Monetary Fund. They examined what is generally considered to be the most economically effective mechanism for reducing greenhouse gas emissions -- setting a price on carbon emissions, thereby giving a financial incentive to reduce them, and letting innovation and the free market decide how to do this most efficiently.

They asked the question "what level of a carbon price is in countries' best interests?". In other words, what would bring the greatest overall benefit to their populations now -- irrespective of the contribution to protecting the global climate.

Estimating the value of health

Critically, they included in their calculations an estimate of the value of the "health cobenefits" that would be expected from a transition to cleaner fuels, and thereby reduced deaths from outdoor air pollution.

They concluded that fossil fuel combustion receives approximately US$ 5.3 trillion a year in "subsidies" -- mainly through avoiding the costs of the damages caused by their use. They further concluded that placing a "nationally appropriate price on carbon" would cut outdoor air pollution deaths by approximately one third, and reduce greenhouse gas emissions by over 20%. This would raise approximately 3% of GDP, or US$ 3 trillion dollars per year, in revenues that could be reinvested in growth-enhancing public spending, for example in health, education and the green economy. It would also save hundreds of thousands of lives.

Health is key to this arithmetic -- approximately half of the overall value of the gains from a nationally appropriate carbon price are from health; mainly the reductions in deaths and disability from the products of coal combustion.

In reality, the IMF's estimates of the health gains are probably on the conservative side. In addition to reductions in outdoor air pollution (which kills approximately 3.7 million people per year), there is strong evidence of the enormous health gains that could be made, for example, through cleaner and more efficient household energy reducing indoor air pollution (4.3 million deaths per year), and more sustainable urban transport systems that facilitate walking and cycling, reducing deaths from physical inactivity (3.2 million deaths per year).

Low- and middle-income countries are well aware of the health and economic benefits from local action against climate change. They have policy tools and international support at their disposal, and only require sustained political will and investment to get started. Numerous examples of this proactive approach are provided in recent climate and health country studies conducted by the World Health Organization.

The first challenge for any country is in overcoming the inertia that results from the large investments of financial resources, technological development, and now engrained attitudes, that have given us polluting and inefficient systems. For this reason, the greatest opportunities are in the developing economies. They still have the opportunity to select the best options and leapfrog inferior or polluting choices, in the same way they have bypassed landlines and gone directly to mobile phones.

The second is in avoiding the narrow view that measures "costs" and "benefits" only as financial transactions. While there is sound economic data for productivity gained or lost due to a person's health, the health community is understandably wary about putting a value on a human life, and takes a rights-based approach that recognizes the intrinsic value of every individual.

However, whether you consider health as a basic human right, or as a valuable resource that we should invest in efficiently, the answer is the same. The health benefits from action to cut carbon emissions are potentially huge -- giving countries a tremendous added incentive to bring health into the equation at COP21 and as they redouble efforts to fight climate change.

Learn more about Climate change and health on the WHO website