An idea sparked in the aftermath of the worst offshore oil spill in U.S. history gave way to a community dedicated to democratizing environmental activism worldwide.

Shortly after BP's Deepwater Horizon oil rig exploded in April 2010, environmental activists working on the Louisiana coastline were concerned that news on the disastrous spill would not be widely broadcast. Furthermore, they questioned whether information that did come out would be accurate or trustworthy.

To combat the problem, a group of activists and researchers partnered with the environmental justice group Louisiana Bucket Brigade. Together, they used a crowd-sourced crisis mapping tool that would allow individuals living near the Gulf to report what they were observing.

Some 150 people participated in gathering hundreds of thousands of images using this method and provided compelling visual evidence of the spill’s impact on the local landscape.

“It was not just about getting the images,” Dosemagen explained to The Huffington Post, “but it was also about step process of getting people involved in an event that was blacked out.” 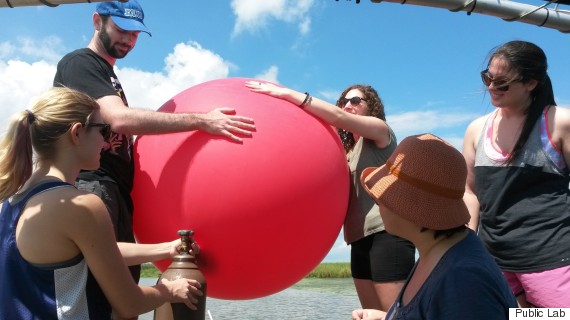 Activists gather around a red balloon used for aerial imagery.

And with that, an idea was born. Later that same year, Dosemagen co-founded Public Lab, an organization that develops affordable, open-source tools for environmental investigations and explorations. It provides a platform where those tools can be applied to monitor conditions in local communities and, ideally, help effect change. Public Lab is funded through a number of grants from groups like the Knight Foundation and the Schmidt Family Foundation’s 11th Hour Project.

“Monitoring tools are normally created at a price point that is not accessible to the general public who are most directly affected,” Dosemagen added. “We wanted to create a platform and community to allow for organizers in whatever community they might be in and scientists to come together and work on this."

Since then, Public Lab’s tools have been used by activists throughout the world -- and not just on environmental issues.

On the southeast side of Chicago, activists have used balloon mapping techniques and an open-source software program they discovered through Public Lab to monitor piles of black, dusty petroleum coke (or “petcoke”) that roiled residents when it began blowing from the Calumet River-adjacent facilities into nearby backyards. Those operating the petcoke storage sites have been forced to adhere to new regulations, and one company shut down its facility following activists’ complaints. 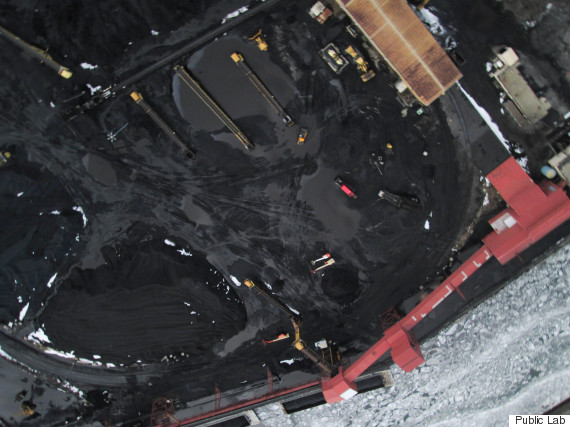 An aerial image of the petcoke piles attained using the balloon mapping technique.

In Kampala, Uganda, where a group of women was being threatened with eviction from an area where they were selling crafts, aerial imagery was used to show how busy the popular the area was in an effort to help the woman remain. Ultimately, this push was unsuccessful, though they were able to stall their displacement, allowing for more time to make alternative plans.

And on the Gowanus Canal in Brooklyn, New York, activists monitoring attempts to clean up the heavily polluted EPA Superfund site are using aerial imagery to map the waterway and track conditions. They then share their findings with the city’s water management agency.

Urban planner Eymund Diegel, who lives near the canal and also sits on Public Lab’s board of directors, is one of the individuals keeping a close eye on Gowanus, monitoring any sewer outflow as well as vegetation being grown along the formerly busy transportation hub. His and other area residents’ mapping efforts have been credited with helping to provide evidence of a suspected mass grave where 200 Revolutionary War soldiers were buried. The site, after attracting the attention of the New York Times, could become a commemorative park.

Beyond these achievements, Diegel argues that one of the most significant things accomplished by these initiatives is simply bringing together people who ordinarily would have little to do with one another.

“These tools allow you to build bridges,” Diegel told HuffPost. “Having big red balloons ties the observer to the observed. Suddenly someone is watching a camera floating over their backyard and they say, ‘Hey, what are you doing?’ And they’re not pissed off, but they’ll ask if their kid can hold the balloon.” 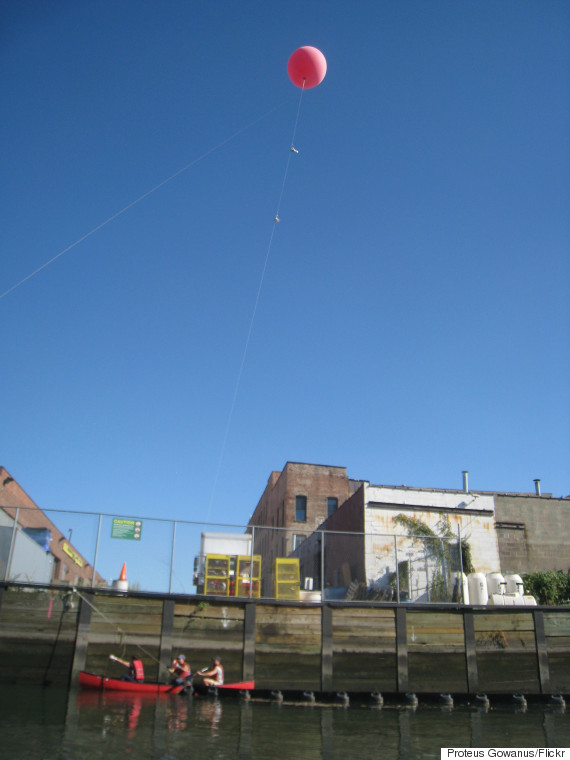 Organizers take to the Gowanus Canal, red balloon connected to a camera in hand, to create aerial imagery of the notorious waterway.

“Without this sort of community-driven and community-conducted science, people are having to rely on academic or government groups to do this, and they have to wait for them,” she said. “The idea to democratizing this is that people are empowered to make these discoveries about their own environment, discoveries about the environmental conditions impacting them and their children.”

Further, Diegel noted, there’s a recreational aspect to Public Lab’s work that might be just as important -- particularly when it comes to getting younger generations interested in the environment.

“We have to make science and inquiry more interesting and dynamic,” Diegel said. “That’s one of the things they’ve managed to do, bringing back an element of fun to finding out what you want to know.”