Time for your daily dose of depressing journalism news: For every $1 that a public relations specialist made in 2013, a journalist made 65 cents.

A new study by Pew Research Center shows that the pay gap between PR specialists and journalists has gotten significantly larger in the last ten years, with PR staffers now making nearly $20,000 more a year than reporters. In 2013, PR specialists earned a median annual income of $54,940, compared to the $35,600 earned by reporters, according to the US Bureau of Labor Statistics.

That means that journalists are making a sad 65 percent of what PR employees are making.

See the chart below: 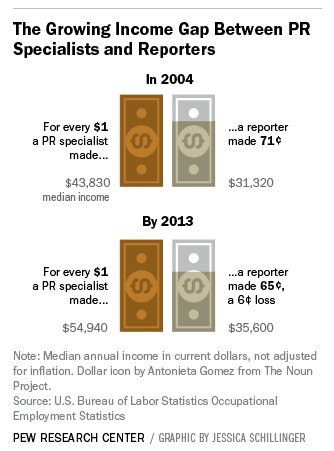 The gap is even larger than it was ten years ago in 2004, when journalists made 71 cents for every dollar PR specialists made. The American Journalism Review reported in May that journalists now actually make less than the average wage in the US.

As the pay gap continues to grow, journalists are also becoming increasingly outnumbered by those in public relations. In 2013, there were 4.6 public relations specialists for every one reporter in the US. And to keep the grim news coming, the number of working journalists in America today is much less than it was ten years ago, dropping by nearly 20,000 reporters in only six years.

Check out the full study by Pew here.