The recession shifted the former balance in education funding, according to a report released yesterday by the U.S. Census Bureau.

For the first time in 16 years, local governments paid a higher share toward public education than states. The Public Education Finances report shows that public school systems received $593.7 billion in funding in 2010, an increase of 0.5 percent from the previous year. Local governments contributed 44.0 percent of that amount, almost equal to state sources at 43.5 percent, and followed by federal sources that provided the remaining 12.5 percent.

Revenue from state sources decreased by $18.0 billion, which represented a 6.5 percent decrease from 2009. This marks the largest decrease in state funding from the prior year since the Census Bureau began annually publishing school system finance reports in 1977. 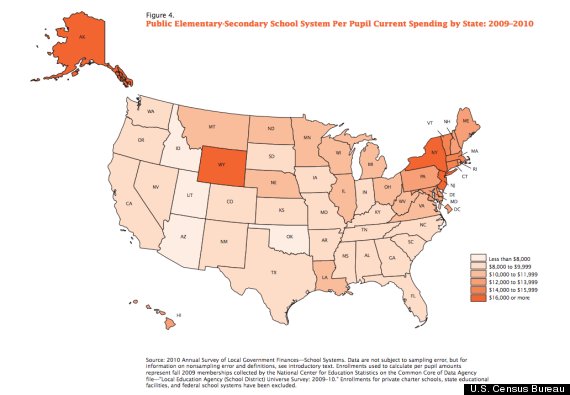 The richest school districts in America, as ranked by 24/7 Wall Street:

PHOTO GALLERY
The Richest School Districts in America
Download
Calling all HuffPost superfans!
Sign up for membership to become a founding member and help shape HuffPost's next chapter
Join HuffPost