This is a very rigorous and useful bit of analysis on our jobs situation from a couple of my former EPI colleagues, Heidi Shierholz and Josh Bivens.

One of their key points is that what's uniquely tough about the current job market is not so much the private sector pace of job creation -- it's too slow, but it's actually pretty close to the pace of the early 90s recovery, and well above that of the 2000s (see EPI's figure 2). Not that those early expansions were great shakes either, but, at least in unemployment terms, they were better than this one.

No, the big difference this time, as shown below, is the public sector job losses. This is very much a policy variable -- i.e., something we could do something about -- but conservatives continue to block the policies that could help offset these losses. 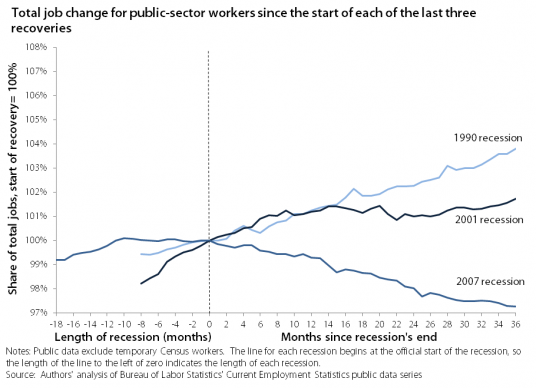 These raw numbers of public sector losses get a lot of attention, but the part I wanted to highlight is the private-sector jobs multiplier from public sector jobs. I quote at length here because Heidi and Josh provide an excellent explanation of this overlooked point.

Second, the economic "multiplier" of state and local spending (not including transfer payments) is large - around 1.24. This means that for every dollar cut in salary and supplies of public-sector workers, another $0.24 is lost in purchasing power throughout the rest of the economy. Teachers and firefighters stop going to restaurants and buying cars if they're laid off, which reduces demand for waitstaff and autoworkers and so on. Add these two influences together (supplier jobs and jobs supported by this multiplier impact) and roughly 0.67 private sector jobs are lost for every public sector job cut. This means that the public sector being down 1.1 million jobs has likely cost the private sector 751,000 jobs (1.1 million*0.67). [my bold]

Further, it should be noted that this 0.67 figure only accounts for private-sector job loss that is due to direct public-sector job loss. But state and local austerity has components besides cutting direct jobs; when these governments cut back, they often don't just cut jobs, they also cut transfer payments (generally safety-net programs like Medicaid and unemployment insurance which are not associated with much direct public-sector employment, but instead transfer money straight to distressed households).

They incorporate a few other impacts that you should read about, but here's their bottom line:

Putting our four components together--the jobs lost in the public sector, the jobs the public sector should have gained just to keep up with population growth, the jobs lost in the private sector due to direct public-sector job declines, and the jobs likely lost when state spending cutbacks on transfer programs were made--we find that if it weren't for state and local austerity, the labor market would have 2.3 million more jobs today; half of these jobs would be in the private sector.

It's obviously nuts to maintain, as some do, that the government doesn't create jobs. It creates millions of them, and we very much need them if we're going to educate kids, drink water, put out fires, have public safety, etc. But public sector jobs also create private sector jobs upstream and downstream.

It's all connected, man.