When Peter Hart Associates asked registered voters recently who they felt was benefiting from the government's economic policies, the resounding answer was that the hundreds of billions poured into the economy have done far more to help those at the top of the economic food chain than those on the bottom.

A paltry 13 percent of those interviewed for the September 2009 survey said that the average Joe and Jill have been "helped a lot or a fair amount" -- compared to 65 percent who think regular folks have gotten little or no assistance from the government. Fully 54 percent of respondents said Wall Street investment companies have been helped - and nearly two-thirds said the large banks have been taken care of. 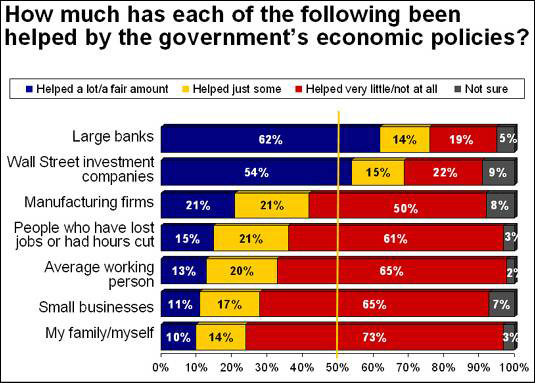 The voters seem to have gotten it about right.

"In relative terms, the perceptions are dead-on: the big winners so far are the bailed-out bankers. Meanwhile on the jobs and housing front, things get worse," says University of Texas economist James Galbraith. "You can make an argument that everyone has been helped by the fact that the economy hasn't collapsed even more completely," Galbraith added, but that does not "cut any ice with the population at the moment. What they see is that a top-down bailout works on the top and doesn't go very far down. And they are right."

The stimulus has not kept the unemployment rate at or under 8 percent, as Obama officials originally claimed it would. Instead, last month it reached 9.8 percent, and would have broken 10 percent except for the fact that hundreds of thousands of unemployed workers -- 571,000 in September alone -- have given up looking for jobs altogether. Applications for Social Security were 23 percent higher last month than a year ago, suggesting growing numbers of workers are taking early retirement. Disability claims have risen by roughly 20 percent.

And there are reports that some key programs to help struggling working and middle class Americans are not working out as well as expected. The Washington Post on October 24 reported that the federal program to help homeowners whose property is substantially "underwater" - worth less than the mortgage - refinance under more favorable terms "has so far reached fewer than 3 percent of those targeted, with many struggling borrowers deciding that the benefits of a new loan aren't worth the closing costs."

The Detroit Free Press on October 8 reported that a near riot broke out at Cobo Center in the downtown section of the city when an estimated 35,000 people showed up "desperate for help with mortgage and utility bills...threats were made, fights broke out and people were nearly trampled. The huge crowd that day was part of over 65,000 people seeking a portion of the area's $15.2 million in federal stimulus money intended for individuals to avoid foreclosure or for the homeless to get shelter. About 3,500 men and women, or just over 5 percent of those applying, will get any help."

Nationwide, ProPublica, the investigative news website, found that stimulus money has been distributed with little or no regard for unemployment and poverty concentrations. "Stimulus spending is literally all over the map," the authors of the study wrote. "Some battered counties are hauling in large amounts, while others that are just as hard hit have received little."

While the benefits flowing to the average worker, including those down and out of work, have been haphazard, the same cannot be said about aid to the nation's large banks and other "too big to fail" institutions, along with many smaller banks. (See list of bailout recipients.)

Without billions and billions of dollars in backing from the Treasury and the Federal Reserve, many of these institutions were headed toward bankruptcies that would have wiped out the value of their stock and severely reduced, if not eliminated altogether, the value of company debt, including bonds.

Most notably, insurance giant AIG has been on the receiving end of $134.4 billion in federal cash, according to ProPublica.

More important, the all-important bonus pool for Goldman employees had climbed to $16.7 billion by the end of the third quarter, on its way to $20 billion for the year - enough to give each of its 31,700 employees a bonus of roughly $630,000 each, although bonuses are given out in the multi-millions for those at the top of the corporate pyramid and in markedly smaller amounts to those in the middle and bottom ranks.

"For Goldman employees," the New York Times noted, "it is almost as if the financial crisis never happened."

President Obama and his aides are acutely aware of the hostile public assessment of the recovery efforts. The administration has recently begun efforts to publicize the benefits for the general public and to criticize the actions of some of the large investment banks.

"We acted boldly and we acted swiftly to pass a Recovery Act that's made a difference in the lives of families across America," Obama told supporters at an October 21 DNC fundraiser in New York. Stressing government programs targeted at those struggling to make ends meet, the President declared, "We extended unemployment insurance, increased unemployment insurance for 12 million Americans to help them get through tough times -- that's helped millions of New Yorkers. We made COBRA 65 percent cheaper to make sure that if you were looking for a job, your family wouldn't go without health care. ...We gave relief to states including New York to help prevent more teachers and firefighters and police officers from being laid off. According to initial reports, 250,000 jobs in our schools were saved as a consequence of the Recovery Act -- a quarter of a million teachers and educational specialists. We've supported more than 30,000 loans to small businesses."

In a bid to deflect populist anger at the administration over the gains of the major banks, Obama is declaring that "now it's time for our banks to stand by creditworthy small businesses and make the loans they need to open their doors, grow their operations and create new jobs....It's time for those banks to fulfill their responsibility to help ensure a wider recovery, a more secure system and more broadly shared prosperity."

Meanwhile, some economists say that the benefits of the federal programs far outstrip the costs and balance apparent inequities. Berkeley economics professor Brad DeLong, who was deputy assistant Treasury Secretary during the Clinton administration, argues: "The economy fell off a cliff in 2008 and landed with a crash in the quarter of Obama's inauguration. Without the [government bailout] policies, we would have kept rolling down the hill, and right now would have a recession not twice, but about 1.7 times, as deep as the one we have."

The benefits of federal actions taken so far, DeLong contends, include the following: total: income is $750 billion a year higher than it would have been without such action; three out of every 100 workers has a job because of the policies, and "when the dust settles, the U.S. government will have transferred [only] $200 billion to high finance...that it is not going to get back." In sum, DeLong says, "the voters' perceptions are simply flat-out wrong."

Whatever populist anger there is should rightfully be directed at the Bush administration and former Treasury Secretary Henry Paulson, DeLong says. "Had we wanted policies that transferred less taxpayer money to Wall Street, we should have had people other than George W. Bush and Henry Paulson sitting in the hot seats in the fall of 2008.... For Paulson, the game was to stop depressions without risking 'socialism' -- and minimizing the transfer from the federal Treasury to high finance was a second or a third-order concern for him."

But when it comes to the big picture, the voters in the Hart Research survey quite accurately saw the way the world works: When everyone from bankers to laid-off assembly line workers line up for a hand from the feds, the bankers go to the head of the line. The laid-off worker is lucky to get a partial COBRA subsidy and avoid getting crushed outside the Cobo Center.