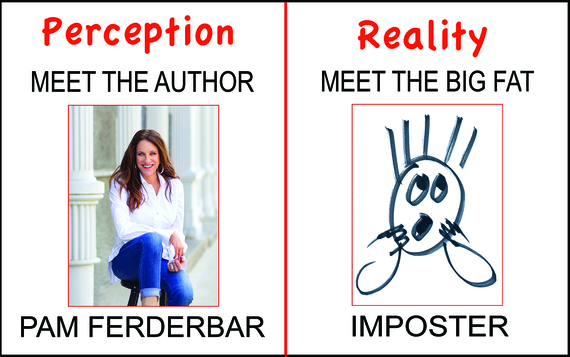 According to a Chapman University survey on American fears, our top phobias are public speaking, heights, and bugs. (Fear of clowns rolled in fourth on the Chapman list, but is number one on my personal scared-sh*tless-o-meter.)

Most people panic the instant they realize they must, at some later date, speak in public. Personally, I don't freak out until I step out of the car at the venue and walk the green mile to the podium. Since my novel was released in June, I have been on a "book tour" -- a loosely organized schedule of speaking engagements designed to give me just the right amount of time between events to forget any validating feelings of adequacy and success that I may have had after a good talk, and focus instead on all that could go wrong at the next one.

The pithy tips I've been given, like "imagine the audience in their underwear," "drink plenty of fluids," "wear a favorite article of clothing," and my personal favorite, "snap a rubber band across your wrist to distract yourself from anxiety," have been more problematic than useful.

The first time your former brother-in-law walks in and you spit a mouthful of hydrating Evian across your notes while your rubber band zings the lady in the first row across the eyeball, you realize that people are staring at you, and not because they admire your lucky blouse.

If our number one fear is public speaking, then, ipso facto, nearly everyone must be afraid to do so. So when you stand on the dais and stare blankly into the audience like a cow at dusk, people are thinking, "Holy crap, I could never do that." Boom. You are a hero. No one needs to know that you begged your boss to send someone else, faked your own death, or downed an entire bottle of Imodium and still have the runs.

Here are a few tips that have helped me overcome my anxiety, and actually enjoy the public speaking experience:

Memorize three key points about your subject that you could spout in your sleep. No matter what happens, or what someone might ask if there's a Q&A involved, you can always expand on your three main points even if you have forgotten everything else.

I once heard a CNN newsman ask George W. Bush about similarities between the war in Iraq and Vietnam, to which Dubya replied, "I'm so glad you asked that. I thought you were going to ask me about the Medicare drug benefit program we just signed into law. The Medicare drug benefit program I just signed into law is the greatest expansion of..." Bush went on to speak for five minutes about that without ever addressing the reporter's question.

Write and rewrite your notes until they are perfectly organized on index cards or papers that are numbered and impossible to mix up.

Create a checklist: glasses if you need them, two sets of notes -- in two places on your person in case your purse or satchel is snatched (or you encounter a clown and drop everything into the sewer), Imodium (for obvious reasons), Chapstick or Vaseline so your lips don't stick to your teeth, business cards, and any props or visual aids you use in your presentation.

Be 100 percent clear on the location of your event and how to get there. Mapquest or GPS the route days prior to the event, then print the directions in case an electromagnetic disturbance on Mars wipes out our satellites, rendering GPS useless. Figure out how long it will take to get there, at that time of day or night, and allow an extra 30 minutes in the event of traffic, lack of parking, or another trip to the restroom.

Gas up the car earlier in the day. You don't want to risk being late or smelling like gasoline at your event.

Stand and rehearse aloud. Over and over. This will usually create the need to modify your notes. If there are words you trip on, now is the time to highlight the words or write them out phonetically.

Rewrite your notes in "breaths" or paragraphs of "dialog" that mimic your speaking style. If you take a breath after two sentences, or after you've made a particularly strong point, place spaces in your notes accordingly.

Highlight or "bold" words you want to emphasize. Seriously, do it over and over, aloud, rewriting the notes until you can deliver what's on the page effortlessly and with the emphasis you want.

The most powerful people on earth rely on silence rather than words to make their most dramatic points. Whether you are speaking about widgets or financial planning, begin with a rhetorical question such as "what is a widget?" Then pause dramatically for a few seconds while you glance from person to person.

Watch the body language. People will sit up straighter. You will almost be able to see the cogs turn in their brains. The silence will have given you power. Anything you say thereafter will seem more important. It's a cool little trick. It also buys you a little time for a couple of deep breaths, which will lower your blood pressure and give you the further appearance of not being nervous.

If you have lost your place, or your mind has suddenly gone blank, again, pretend it was part of your plan. Stop fully. Take a sip of water. Regroup mentally. People will think you're "saying something" with the silence. Let 'em!

Everyone likes a compliment. When it's all said and done, take one last deep breath and tell the audience that you were a little nervous about your presentation, but this audience, these wonderful, receptive folks made you feel completely comfortable. Give them a little applause, and they'll applaud you doubly, because 99 percent of them are thinking, "I could never do that."

One thing I'm not terribly nervous about is writing, and this week I received the best review of my novel ever -- from Windy City Reviews! Read it here.
Visit Pam's website.