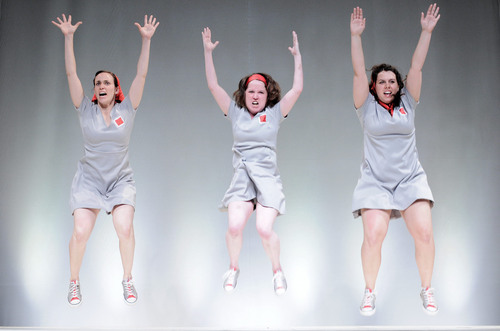 A scene from Life and Times: Episodes 1-4, running January 16-20 at The Public Theater at Astor Place as part of the Under the Radar Festival 2013. (Photo Credit: Nature Theater of Oklahoma)

There is a week-and-a-half in the New York downtown theater scene each January at The Public Theater filled with rare magic. The best, the strange and the relevant from all over the world gather at this world's fair of experimental theater known as the Under the Radar Festival. For newcomers to this event, here is the Public Theater's description of what you can expect:

Under the Radar (UTR) is an annual theater festival that spotlights international artists ranging from emerging talents to masters in the field. The festival is a wild mix of works by ensembles, solo artists, writers, and creators. The ultimate goal of UTR is to offer a crash course in theater that is exciting, independent, and experimental, created by some of the most dynamic artists working today. In its eight year history, there have been 104 productions from over 17 countries and the U.S., including Australia, Belarus, Bolivia, Brazil, France, Ireland, Mali, Mexico, the Netherlands, Russia and the UK. Some artists who have collaborated with UTR include SITI Company, Elevator Repair Service, Nature Theater of Oklahoma, Superamas, Abbey Theatre, Mike Daisey, Reggie Watts, Teatro De Los Andes, and many more.

Meiyin Wang, Associate Artistic Producer of the Under the Radar Festival, gives us some of the highlights of this year's festival.

Jody Christopherson: In your article for Howlround, The Theater of the Future, you basically suggest taking a hammer to the way that American theater is currently made in order to ignite its evolution. What reflections of this sentiment do you see in the upcoming Under the Radar Festival lineup?

Meiyin Wang: For context, that article came from a text of a "manifesto" that I gave at a convening about a new play in development, so I was tasked to be provocative. The response to that article has always been surprising to me because when I was asked to describe "the theater of the future," I was actually just talking about the current trends and developments in theater/ performance, both international and American, that were really exciting to me. Some are old concepts that are undergoing a resurgence, some are new breakthroughs due to technology and some are happening out of necessity. These include the changing relationship between performer and spectator, the mutation of the notion of sole authorship, the re-distribution of cultural production, etc.

Nature Theater of Oklahoma has essentially upended the way we think about how one can make theater as an American company. They think on an epic, revolutionary scale, and are one of the most important theater companies working today. They've taken the idea of found text and documentary theater (among other things), [creating] 16 hours of recordings of a person telling the story of their life over the phone, and attempting nothing less than creating a masterpiece for the 21st century with their piece Life and Times. Episodes 1- 4 performed as a marathon, which will be 11 hours long and an amazing celebration of an ordinary life. Natural Theater of Oklahoma create and tour work on their own terms, and they've been able to operate outside the non-profit system, and get major support from institutions in and outside of the U.S. I think they have successfully "hacked" the system to work for them.

The way that Debate Society creates their work is an example of the changing nature of authorship. With Blood Play, their seventh collaboration, Hannah Bos and Paul Thureen are the writer/performers and Oliver Butler is the director, but the meticulous research and development process they go through to create the detailed world of the play and characters, and the elaborate physical universe that they create with their designers, really makes those distinctions obsolete. 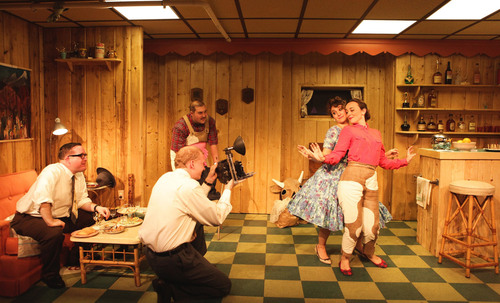 A scene from Blood Play, running January 9-20 at The Public Theater at Astor Place as part of the Under the Radar Festival 2013. (Photo Credit: Sue Kessler)

One of the things I talked about was the idea of cultural centers, and we are going full tilt with that during Under the Radar. Everything is under one roof, and in addition to the shows, we are truly inhabiting the new Public Theater. From underground tours to occupying the airwaves (OK Radio), from round-table discussions (Culturebot) to our festival lounge with incredible musicians and guest DJs, we want you to live, breathe and drink Under the Radar during January.

Under the Radar is a "festival tracking theater from around the world." Can you tell us about some of the companies and shows visiting from overseas? Also do you find that their work is unique even for the areas of the world they represent?

Australia's Back to Back is returning to UTR with Ganesh Versus the Third Reich. The piece begins with the god Ganesh going back in time to reclaim the symbol of the swastika from Nazi Germany, and a play within a play structure emerges. Back to Back is a devising ensemble under the direction of the brilliant Bruce Gladwin, and they create work with a distinct outsider perspective. This is a truly unique company, both in Australia and internationally. The acting company is composed of members with perceived disabilities, and the work that Back to Back creates is devised from their thoughts, fascinations and research. Their work is delicate, funny, brave and visually stunning, and the piece asks some profound questions about dominant narratives and the right to tell stories. 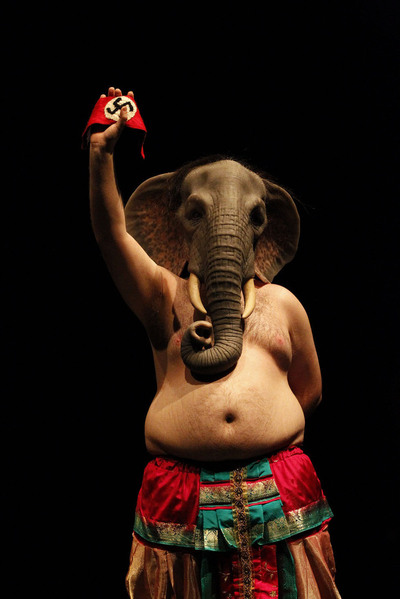 A scene from Ganesh Versus the Third Reich, running January 9-14 at The Public Theater at Astor Place as part of the Under the Radar Festival 2013. (Photo Credit: Jeff Busby)

C'est du Chinois is a work with a French title by Netherlands-based Hungarian director Edit Kaldor about Chinese people. Edit's work dances on the edge of documentary and fiction. Taking the structure of a Mandarin lesson, the five performers in C'est du Chinois teach the audience basic Mandarin in various categories: China, family, love, etc. With a vocabulary of perhaps 40 words (father, mother, daughter, work, happy, sad, money, china, europe, good, bad), they build a compelling, strangely intimate portrait of an immigrant family in a foreign city trying to survive. I believe Edit started learning Mandarin and came up against the impossibility of it all, and started to build this piece instead. Many words are repeated, and build in relation to each other. In a sense, her use of iterations of language is similar to the mathematics of dance choreography. The cumulative effect of the language, I imagine is both disorienting and satisfying for the non-speaker. It points to the difficulty/task of communication in a very direct way, and perhaps allows one to begin imagining the inner lives of immigrants in a city. 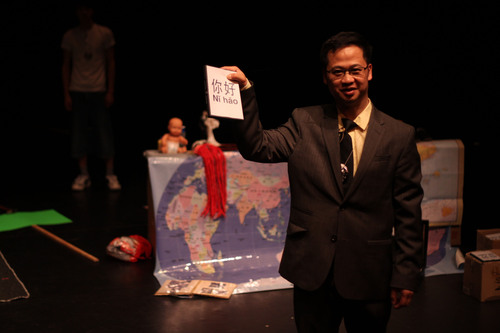 A scene from C'est du Chinois, running January 9-16 at The Public Theater at Astor Place as part of the Under the Radar Festival 2013. (Photo Credit: Raquel Belli)

Belarus Free Theatre's new piece Minsk 2011: A Reply to Kathy Acker is raw, urgent and heartbreaking. The company, even with some members in exile from Belarus, is making necessary work. They come from an Eastern European theater lineage of strong, phsyical ensembles and auteur directors, and their work is a formidable example of that tradition. BFT is exceptional in that they are a company that has been able to tell their stories and tour outside of Belarus, as well as collaborate with artists from all over the world. Art and activism play equal part in their work, and I think it is very special. 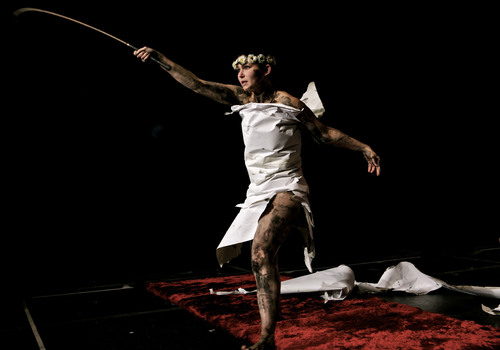 A scene from Minsk 2011: A Reply to Kathy Acker, running January 15-20 at The Public Theater at Astor Place as part of the Under the Radar Festival 2013. (Photo Credit: Nicolai Khalezin)

Hamlet, Prince of Grief is a real bullet of a play, directed by Mohammad Aghebati from Iran. It's a beautiful, poetic adaptation of the Hamlet story in an astonishing performance by Iranian actor Afshin Hashemi. Fleur Elise Noble's work with 2-Dimensional Life of Her is a seamless integration of animation, technology, old fashion drawing and puppetry. Both of these pieces have taken the essence of an idea and executed with great imagination and rigor. 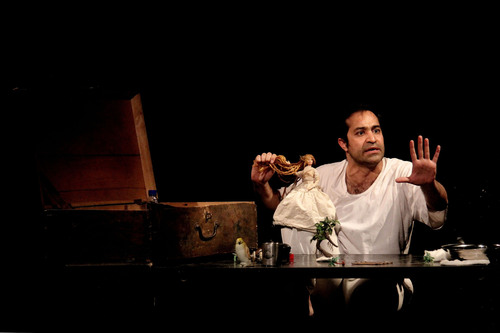 A scene from Hamlet, Prince of Grief, running January 10-20 at The Public Theater at Astor Place as part of the Under the Radar Festival 2013. (Photo Credit: Medhi Shaban)

How did you begin working with UTR's Festival Artistic Director, Mark Russell, and can you describe your creative partnership?

I had just graduated from the Columbia MFA directing program and was trying to make my way in New York. I had a part-time internship at The Public in the producing office. I remember sharing an elevator with Mark once and being too intimidated even to say hi. About a month later, he was looking for an assistant -- I believe he only interviewed two people, and he picked the one who already knew where the copy machine was. I was at the right place at the right time.

I've been with the festival and The Public since the 2007 edition. My role has evolved from assistant, to line producer, to -- as Mark often says -- "riding shotgun." Mark makes the final call and I execute the vision (with the help of so many) -- but through the years we have become true partners in the curating and decision-making. Our shared office looks cramped cockpit of a plane. The close proximity means we hear almost every telephone conversation, sit in on artist meetings together, get to bat around the far-out idea of the day, watch the same DVDs, and get to demand reasoning for particular choices. We don't have the comfort of distance (or a door), it keeps both of us honest. There's a lot of trust and humor in the relationship, and Mark has been an incredible mentor to me.

The Under the Radar Festival runs from Jan 9-20. For tickets and a complete schedule, please visit the website.