Summer Dreams of Puccini: From Lucca to Cooperstown

I love Giacomo Puccini's operas; it is as simple as that. I close my eyes and soar. So much have I come to love Puccini's music, at times it feels that I might have been Puccini in a former life. Oh welcome fantasies--I even love to toss my silk scarf jauntily around my neck when I head to the opera as he must have done. This summer, particularly, I cannot get enough. I was lucky to commune with Puccini both in his birthplace in Italy, Lucca, where every night of the year Puccini music is being performed somewhere in the city; and at one of his spiritual homes, Cooperstown's Glimmerglass Festival, where Puccini operas receive world-class staging and performance and where this summer's La Boheme is surely one of the most emotional, beautiful and youthful ever to be staged.

Some opera lovers with steel-edged musical appetites dismiss Puccini as merely melodic, but that is exaggerated high-brow critique. Puccini is timeless, a quality bound to raise envy. Not only are his melodies perfectly, essentially and inexpressibly exquisite, they entwine passionate stories of love and politics that no matter when set, speak to audiences today. The young lovers of La Boheme have existed in every culture and every time, living on creative juices, trying to dodge poverty and indifference while they invent each day anew, bucking convention. Or in Tosca, the unctuous Scarpia could as easily be Saddam Hussein or Bashir Assad, or post 9/11 US water boarders for that matter. Torturers cloaked in the so-called greater cause. And almost all Puccini's leading women are modern-day feminists without ever having heard the word--strong, focused and determined. Puccini empowered his women well beyond the social dictates of their time. Puccini's leading women control and bend the plots, owning the outcomes, whether it is saloon-keeper Minnie daringly cheating in a poker game to win the life of her lover in The Girl of the Golden West, or Tosca herself, diffusing Scarpia's lecherous advances with the poetry of her song, and then, killing him neatly with one clean stab of the dinner knife she might have otherwise used to peel fruit.

But, if we want to opt out of seeing issues of our world in Puccini, we can just take the music and stories for the pure romance they offer.

This year I was fortunate to hear a fascinating talk by conductor and music scholar, Joseph Colaneri, who is also Music Director of the Glimmerglass Festival and conductor of this season's La Boheme. On opening night, the music seemed to flow from his fingertips, but I suspect he's been as one with the piece ever since he conducted it for his Metropolitan Opera debut in 2000. Colaneri knows Boheme as if he wrote it himself, I feel, and his talk focused on just the last twenty minutes of the opera. In this visually and dramatically poignant scene, the sickly young Mimi, sung at Glimmerglass this year with pure grace by Raquel Gonzalez, gradually dies, breaking the heart of her lover, Rodolfo, and to the torment too of their disconsolate friends. Puccini is a master of narrative themes, and he has been criticized for repeating some themes from one act to another in his operas. But a genius like Puccini can do what he likes, and in his talk on Boheme, Colaneri took us through each theme Puccini introduced to signal a thought or frame a scene, and then how those themes are seamlessly drawn together again later, so that through the culminating musical mosaic we enter Mimi's memories of all that has come before her life began to slip away. As Colaneri writes in an essay for Glimmerglass ".... The audience may not be aware of this at an intellectual level, but it is the recall of the moments earlier in the piece that make Mimi's death so moving."

In Lucca, homage to Puccini is everywhere, down to the buttery raisin-studded "Pain Puccini" baked exclusively by the pastry purveyor, Taddeucci, a shop so elegantly appointed tourists gape at it from the streets. But for Puccini lovers, the real magnet is the Puccini Museum, the restored birthplace of Puccini and an archivist's center. Inside are many trappings of Puccini's early life, as well as letters, photographs, smart clothes he owned and sumptuous costumes made for his operas. But the high points are the music manuscripts in Puccini's hand, including a working copy of a final "Tosca" score, complete with Puccini's revisions cut and pasted into place. I was so excited to see that compositional map, I nearly missed seeing one of Puccini's actual silk scarves draped over a chair, indeed a scarf just like mine.

Puccini's aura even spills out into the piazza, whose focal point is a much beloved statue of Puccini by the Italian artist, Vito Tongiani. The bronze statue seems as alive as Puccini's music. In fact, the statue did come alive once. Tongiani used a bit of grapevine to form the cigarette he put into Puccini's hand, and not only did the vine re-root itself in the wet clay, leaves sprouted, according to a fascinating and beautiful photographic and literary anthology on the sculpture, Puccini Portrait, forthcoming from Cinquesensi, an innovative publisher based in Lucca dedicated to culture and at the forefront of dynamic book design.

At any time of year, visitors are snapping shots of the sculpture to cap their Puccini pilgrimage and children scramble up to sit on Puccini's lap.

I stopped short of this, of course, but I understood their joy. We cannot ask more from life than the interlocking dreams of summer that loving music can bring. 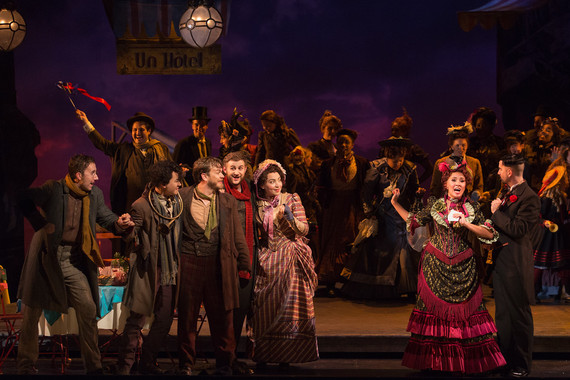 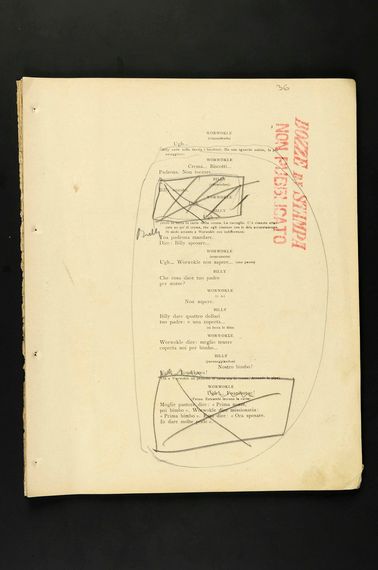 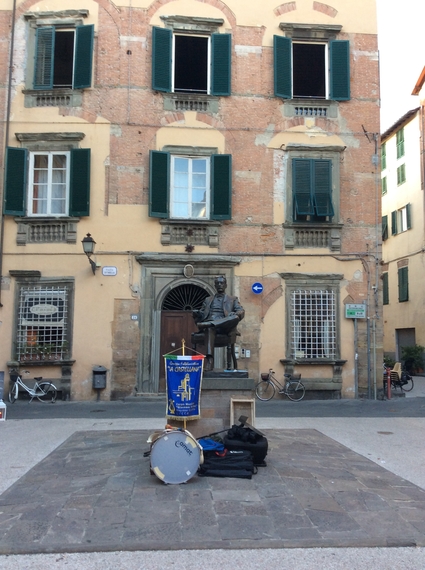