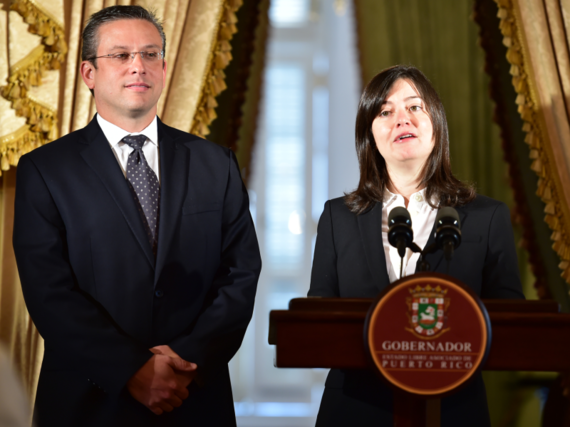 Oronoz, who serves as Chief Legal Counsel to the City of San Juan, would join a Court composed of 9 justices as its third female member and fifth ever female judge, should the Senate of Puerto Rico confirm her appointment.

"Attorney Oronoz Rodríguez is an example of what this generation has to offer Puerto Rico," García Padilla said during a press conference at La Fortaleza. "This is a brilliant young woman who will contribute from the Supreme Court in defining the guidelines for our society in this new century."

Oronoz earned her Law Degree from the University of Puerto Rico and a Master's in Law from Columbia University. She completed her Bachelor's Degree in History at Villanova University.

As an attorney, Oronoz has a varied resume in the private and public sector. She was a partner at the Sepulvado & Maldonado law firm (2009-2013), acting Solicitor General of Puerto Rico (2008) and Deputy Solicitor General (2005-2008). She also clerked for former Chief Justice Federico Hernández Denton from 2002-2004, who recently retired after serving for close to 30 years in the Supreme Court.

Aside from her impressive academic resume and professional career, Oronoz has also been committed to multiple social causes. As an example of her commitment to civil rights, in 2001 she participated in multiple meetings in Washington, DC as part of a grassroots initiative dubbed "Cabilderos del Pueblo" (Spanish for "People's Lobbyists") which grouped hundreds of professionals who actively supported the exit of the U.S. Navy from Vieques.

However, although Oronoz professional merit and academic standing is unquestionable, conservative voices from the New Progressive Party have already started to express their rejection.

Fundamentalist evangelical groups, mainly aligned with the New Progressive Party, have also expressed their rejection for an openly gay Associate Justice. A vociferous Cesar Vazquez, the leader of Puerto Rico's anti-gay conservative establishment said that "it was a lack of respect for the people of Puerto Rico and their values". He was seconded by Wanda Rolon, another conservative pastor, who went as far as saying that "the fact that Oronoz thanked her partner [at the appointment conference] already tarnished any professional merit she may have".

During the announcement, Oronoz very candidly thanked Gina Mendez, her life partner: "To my partner Gina, thank you for your unconditional support in the most extraordinary moments of my life. Without you, I wouldn't be here today." Oronoz then proceeded to hug and kiss her partner in front of all the cameras.

Oronoz appointment comes at a high time for much needed progressive and liberal reforms in Puerto Rico. During Governor Garcia Padilla's administration, a bill was passed to ban employment discrimination based on sexual orientation and another to allow for gay couples to file complaints against their partners for domestic violence.

Conservative voices have been losing key battles, the most recent of such being the New Progressive Party's Primary for the City Hall of San Juan. Kimmy Rashkee, the pro-statehood candidate backed by the anti-gay establishment only managed to obtain 11.7% of the vote. Although Puerto Rico has been a latecomer to equal rights, recent electoral mishaps by extreme conservatives and this appointment are a solid step in the right direction.