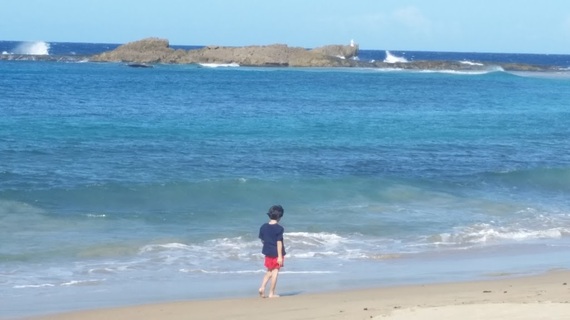 Every day as I look over the deep blue waters of the Condado Lagoon I tell myself: what a privilege it is to live in Puerto Rico. But then, reality sinks in. I open the newspaper at 6 a.m. and read the headlines: "No money." "No payment for bondholders." "Congress owns Puerto Rico." Where am I? Am I in a U.S. colony? No. It can't be. Colonies don't exist anymore, right? Aren't Puerto Ricans Americans?

I read the newspaper again, just to double check. Yes, the people of Puerto Rico have been shortchanged not only in funding but also in civil rights by the US Congress, the US Supreme Court, and soon the U.S. Senate (expected to take up the bill before July 1st) when the PROMESA Act is finally approved and signed by President Obama.

PROMESA aims to establish an oversight board, a process for restructuring debt, and expedited procedures for approving critical infrastructure projects in order to combat the Puerto Rican government debt crisis. The same day PROMESA was approved in the House, the U.S. Supreme Court confirmed that "Congress is the original source of power for Puerto Rico" and therefore, Puerto Rico belongs to Congress. The Emperor has no clothes now. We are a colony.

As I viewed the U.S. House vote on PROMESA -- I could not help but think about my son Salvador who will be 18 in 10 years and may have to face the hard decision whether to stay in Puerto Rico or leave. In 15 years he may have to build his family in the U.S. mainland - not in Puerto Rico - to secure an appropriate standard of living for his children. That is the decision that is currently made by many Puerto Ricans (who are U.S. Citizens) every day these days. Families broken, dreams shattered, and a beloved Island nation state left behind.

I have worked very hard in my life, studied hard, and in many ways my life is the American Dream. I came from very humble origins and thanks to the resilience of my family and our focus on working hard and getting an education (MIT MBA) -- together we achieved unimaginable heights. Yet, when I decided to return to my community to give back, what I found was a web of complicated colonial interests canceling each other out mostly because underlying the relationships was the crude truth that none of us, really, owned our destiny.

Life in Puerto Rico these days is not as easy as it seems from the eyes of our fellow Americans who come to vacation here. Many of the things Americans take for granted in their cities and states are not true here. The current colonial arrangement means, among many other examples, that doctors get reimbursed less money, so nurses get less money, and patients of course get a service that is not at the level it should be as US Citizens.

But what does this colonial relationship mean for people who are just trying to make a living in our community? Well, what it really means is that we are constantly in a daily struggle to prove our worth as human beings, equal to our fellow citizens living in the US Mainland. We also have to struggle each day with a system imposed upon us where sometimes a law or regulation has been brewing for years suddenly is approved. Because we have no real representation and vote, we often know nothing about the law or regulation until it is legally binding.

That's why representation exists in a democracy -- so that citizens can delegate the responsibility of analyzing information, debating issues, making decisions, and having the people's voice taken into account, without having to pay anyone (i.e., a lobbyist) to represent them.

There is intrinsic value in the democratic process, where not only do citizens vote, make amendments, and provide their input, but where there is also a true collective learning process. We don't have this in Puerto Rico, and as a result, our people are constantly trying to catch up, constantly trying to figure out what laws were approved, who supported them, for what reason and how they impact us only after they have been approved not before or during, or when it is too late to influence the process.

The only Puerto Ricans who get a chance to influence the process are those with the resources to drive through the labyrinths of Congress or the White House. Not only do we not have representation in Congress, but we don't have the right to vote for the U.S. President whose policies affect our daily lives.

So what to do about this? Certainly a change in the Puerto Rico-United States relationship is in order. For many years, our politicians, particularly those from the Popular Democratic Party resisted this because Puerto Rico was in a "comfortable" enough position to avoid making a final decision on our destiny. Now, our collective credit cards have been maxed out -- and a lot of money was not well spent, and we are broke. We have lost our negotiating power and are faced with the difficult decision to accept a fiscal control board imposed to oversee our affairs.

Yet, the larger question remains unanswered: how can we take this opportunity that history has given us to take our society to a higher level of democracy, as an Independent nation, a state of the Union or both (similar to Ireland where the Republic of Ireland and Northern Ireland coexist)?

For Americans, a Republic of Puerto Rico means the U.S. would have an important ally in the Caribbean while a 51st state of Puerto Rico means a more diverse U.S. society and government. Either way, to address the Puerto Rican debt and economic crisis, the U.S. needs to work with Puerto Ricans to solve the democracy crisis either as a future Independent nation or 51st State of the Union. The time is now.