Reaffirm the values of the "traditional" family and fight against gay rights, that was the mission of a group of more than 200,000 faithful Christians who met in "Puerto Rico Stands Up", one of the largest pro-family demonstrations ever held in the U.S. commonwealth.

According to Puerto Rican daily El Vocero, from the early hours of Monday morning, members of different Christian denominations from all parts of the island began to gather in front of the Capitol building in the city capital of San Juan, paralyzing traffic in and out of the area.

With gospel music and banners alluding to the defense of exclusive marriage between men and women, participants also protested statements made by government officials seeking to grant rights to gay couples through new legislations.

Cesar Vazquez Muñiz, spokesman of Puerto Rico for the Family, the organization behind the activity, explained their purpose was to protect marriage and family values that would later affect future generations.

"We are concerned that laws will be created to discriminate against the church... We are concerned that public education will be used to change our children, presenting them with behaviors their parents don’t think are correct," said Vazquez in an interview with El Vocero. "This demonstration tells the government that there are things that they cannot touch and those are marriage and family."

Although its presence wasn't as strong, a counter protest was also held by religious leaders and followers near the area in support of gay rights. The group repudiated the expressions made by the religious movement and demanded measures to promote equality.

"One of the struggles I've had with the church is its sexist and homophobic message, and obviously when I see that they are using the resources they have to promote discrimination I cannot stay quiet because that is not the message of God," said Pastor Yenen Silén to Univision.

Other leaders, like Puerto Rican human rights activist Pedro Julio Serrano, also made use of social media platforms to label the event as "full of hate and intolerance."

"Today was a day filled with hatred and intolerance against the LGBT community. Thousands went to the Capitol, deceived by their leaders, supposedly to ‘defend the family’, but that was the least of what they did,” he said on Monday on his Facebook account. "You don’t defend a family by denying rights to its most vulnerable members, attacking the dignity of any human being with hate, discrimination, intolerance and exclusion."

Meanwhile, at a press conference, the new governor of the island Alejandro García Padilla said he will keep defending the rights of all communities, without exception or discrimination by sexual orientation, yet he reaffirmed his position not supporting gay marriage.

"I have met with both sides of the leadership. As governor I react to reason, not pressure. My government is a government of inclusion, we all live in this country, we are all responsible for a better country," said Governor Alejandro García Padilla to Univision.

"I favor the law 54 which protects domestic partnership... As for marriage, I do not agree that it should be anything except between man and woman. But the rights that are guaranteed to people are those we have to look for and secure for all human beings," he added.

The protest comes at a time when Puerto Rico's legislature is reviewing a new amendment to Law 54, which would protect all couples, regardless of marital status or sexual orientation, of domestic violence. In addition, members of the House of Representatives are also working on a bill that would prohibit discrimination due to sexual orientation in the work place.

Although the numbers of attendees haven’t been officially released by the authorities, Christian leaders claim between 200,000 to 268,000 people attended the event. The largest demonstration of this type reported so far was in France, which gathered 340,000 at the beginning of the year. 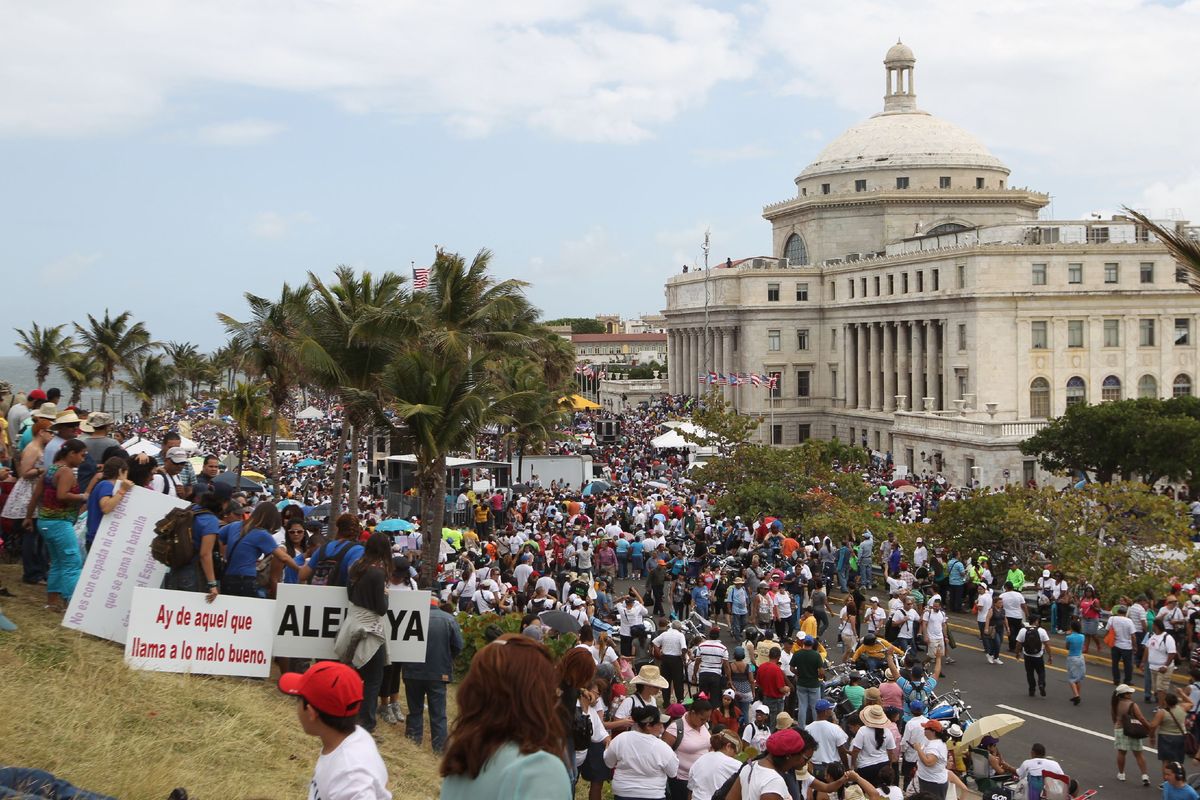