Some 51 percent of Puerto Ricans say they won’t vote to change the island’s relationship with the United States in a plebiscite vote scheduled for Nov. 6, according to a poll published this week by El Nuevo Día.

Another 42 percent said they’d like to become a “freely associated sovereign state” -- a type of independence in close alliance with the United States, similar to the arrangement the U.S. has with the Marshall Islands, Micronesia and Palau, according to a White House report on Puerto Rico's status issued in 2011. Under such a scheme, Puerto Ricans would no longer automatically become U.S. citizens, though they could work and attend schools in the United States, the report says.

The consultation, set for a vote on Nov. 6, is not legally binding. But if a solid majority voted to become a state or go independent, it would give a mandate to the local and federal government to take the steps necessary to change Puerto Rico’s status. Puerto Rico’s statehood would have to be ratified by Congress.

That poll isn’t great news for conservative Gov. Luis Fortuño, who wants the island to become the 51st U.S. state. The figure hasn’t budged since the last El Nuevo Día poll in May. Puerto Ricans have voted on their status at least three times since arriving at the commonwealth arrangement in the 1950s, and each time voters elected to keep it the same.

Fortuño backed the implementation this year of a program to transition Puerto Rico’s public schools toward teaching most classes in English rather than Spanish over the next 10 years. Most jobs on the island require knowledge of English, according to Puerto Rico’s Education Secretary Edward Moreno Alonso.

The United States invaded Puerto Rico when it was still a Spanish colony during the War of 1898, along with Cuba, Guam and the Philippines. The U.S. extended citizenship rights -- including military conscription -- to Puerto Rico in 1917.

Some 4.6 million people of Puerto Rican origin live in the United States, compared to 3.7 million on the island, according to the Pew Hispanic Center.

CORRECTION: An earlier version of this story mistakenly referred to "freely associated sovereign state" as a voluntarily limited type of independence in which the U.S. would control defense and give economic aid. While that's the arrangement the United States currently has under compacts with Marshall Islands, Micronesia and Palau, if Puerto Rico were to become a freely associated sovereign state, the island's government would negotiate any aspects of its relationship with the United States, including defense. 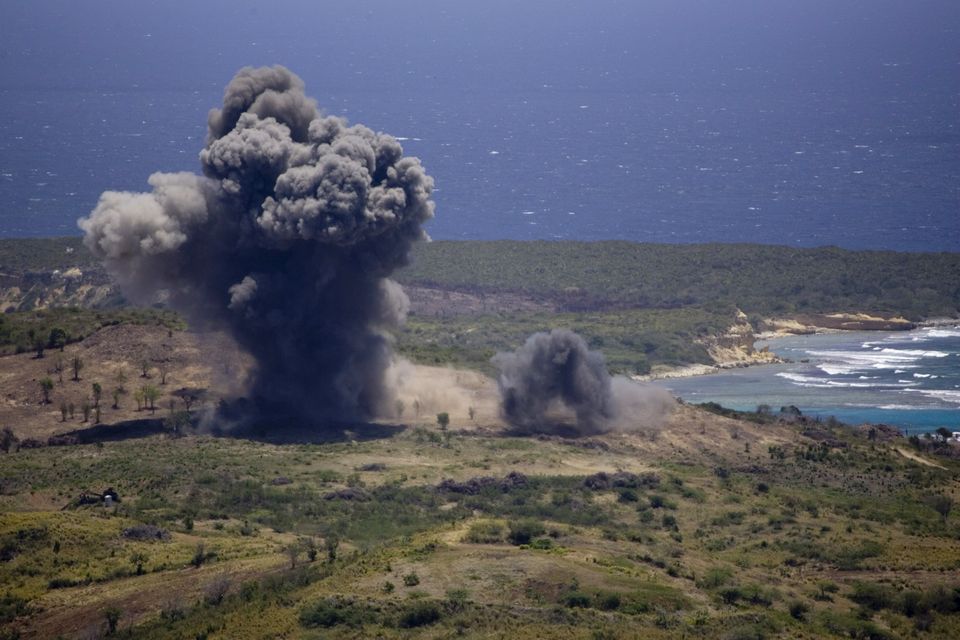 1 / 8
FILE - In this April 17, 2008 file photo, an unexploded ordinance is blown up in a controlled demolition at the former Vieques Naval Training Range, on Vieques island, Puerto Rico. An extensive cleanup of Vieques is underway and the Navy says it's close to finishing work on a former munitions disposal site on the island. It would be a milestone for the cleanup but the plan has sparked criticism. (AP Photo/Brennan Linsley, File)
AP