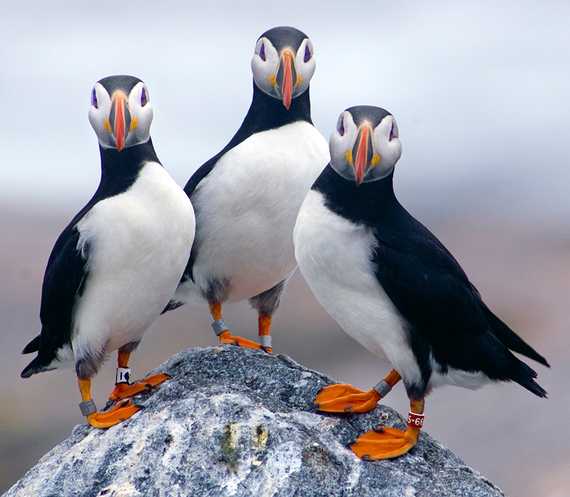 A long-running mystery in the bird world has been solved: Where do the little clown-faced Atlantic Puffins go when they leave their Maine nesting grounds?

Within just the last year, with the help of tracking tags attached to puffin leg bands, scientists have learned that Maine puffins winter about 150 miles southeast of Massachusetts' Cape Cod in the waters of an area known as the Grand Canyon of the undersea world. Here, mountains rise thousands of feet from the sea floor and brilliant corals grow to tree-like proportions in aquatic forests that resemble a Dr. Seuss creation.

So why should the recent puffin discovery by Audubon scientists help President Obama make that decision?

This is one of the most pristine biodiversity hot spots on the planet, a place remarkably free from human disturbance. It's not only the winter home to the threatened Atlantic Puffins, but hosts whales, porpoises, tuna, sailfish and countless other sea creatures and ocean fauna. And those are just the seafaring creatures we know about. Much remains unexplored in this aquatic wonderland.

But the pressure to fish, drill and mine in increasingly remote and unexplored places puts this fragile habitat at risk. President Obama, with a stroke of his pen, has the power to permanently protect the New England Coral Canyons and Seamounts by declaring it a Marine National Monument.

Some commercial fishers oppose the national monument designation, saying it would hurt their business if they are not allowed to fish these waters.

Fishers have experienced declining hauls for years due to overfishing and climate change that is shifting the patterns of fish populations.

When fish and other sea creatures have a safe haven as diverse as the New England Coral Canyons and Seamounts, they grow and repopulate the seas for hundreds of miles, bolstering populations with more and healthier fish.

That's the economic side of preserving this unique area. Just Google "images for New England Coral Canyons and Seamounts" and you can't help but be awed by the photos of lacey corals, sea creatures more magical than anything Hollywood animators could ever create, and thriving sharks and whales.

Scientists believe the Atlantic Puffins are attracted to the area because of the huge upwelling that provides abundant food, the same conditions that attract other sea birds along with whales, porpoises, tuna, sailfish and other fish.

Protecting this pristine habitat that will help ensure the health and bio-diversity of the region's ocean waters for wintering Atlantic Puffins and countless other species of birds and marine wildlife. With the video evidence from our live puffin cams on Explore.org, Audubon scientists know the puffins are going to need all the support they can get to survive as warming sea waters impact the kinds of fish they need to survive.

There is much we still don't know about the area. It's one of the aspects that makes it so special, and would create such a tragedy if it were destroyed.

President Obama has an opportunity to make a decision that will impact the planet and future generations: He can ensure that one of the most magical and bio-diverse spots on the planet will be protected for decades to come.

(And here's how you can help.)

David Yarnold is president and CEO of the National Audubon Society.